Your government wants you to go broke, freeze to death, and starve — for Ukraine

(Natural News) In 1990, as the collapse of the Soviet Union unfolded, NATO along with the United States made agreements and promises to Russia, not to expand their territory.

“We understand that not only for the Soviet Union but for other European countries as well it is important to have guarantees,” then-US Secretary of State James Baker told Mikhail Gorbachev in 1990. “If the United States keeps its presence in Germany within the framework of NATO, not an inch of NATO’s present military jurisdiction will spread in an eastern direction.”

Following that promise, the United States and NATO proceeded to do the exact opposite. Those who have been paying attention, have seen this crisis in Ukraine unfolding for well over two decades.

After increasing provocation, on February 24, 2022, it came to a head as Russia’s dictator, Vladimir Putin invaded Ukraine.

Yes, it is true that Putin’s invasion of Ukraine is horrific — but this does not negate the fact that it is also true that the West and NATO knew their actions would eventually cause this. Since the US promised not to expand toward Russia in 1990, the only thing they did was expand.

Albania and Croatia joined in April 2009, while Montenegro and North Macedonia joined in 2017 and 2020, respectively. Below is a map showing NATO’s expansion from 1990 to 2019. Notice how the Russians watched from the East as their entire western border slowly became surrounded by countries who were joining an organization sworn to defend the world from the Soviet Union which no longer existed. 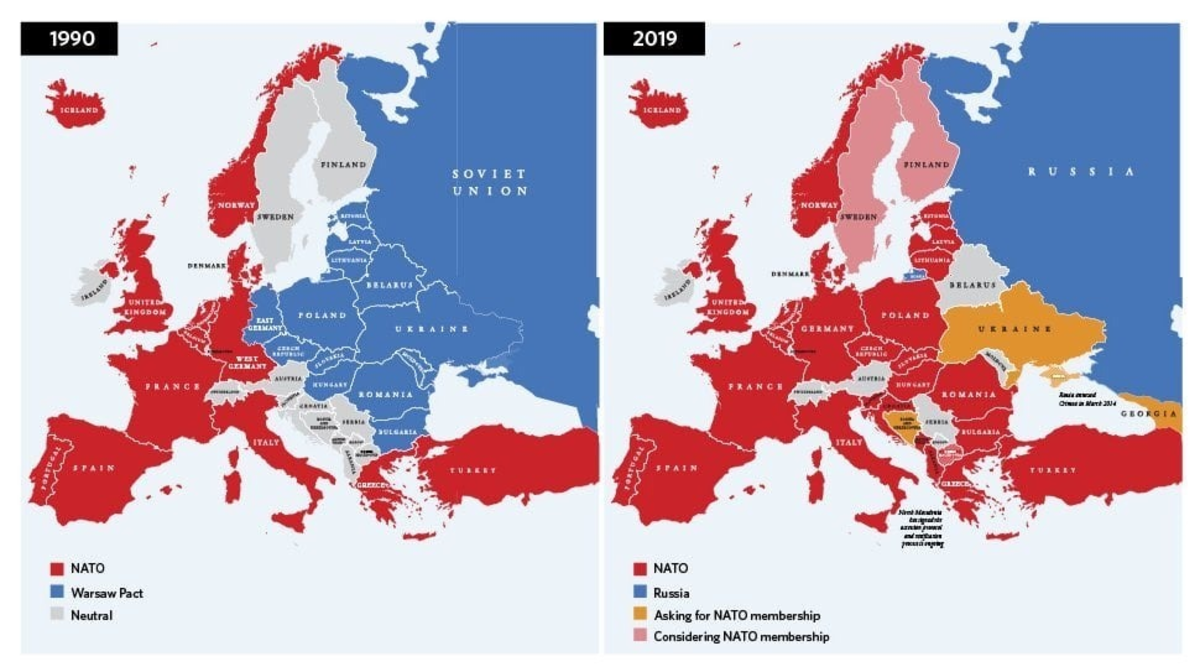 The fact of the matter is that the conflict in Ukraine is nothing new and the US and the rest of the West knew that enlarging the size of NATO — which was arguably no longer needed given the dissolution of the Soviet Union — would directly provoke opposition from Russia.

Despite clearly being lied to for years, the Russian government has asked for two very simple concessions to end this war immediately: that Ukraine never join NATO and that advanced conventional weapons never be deployed in Ukraine. The US has rejected both of these proposals and instead has been sending massive weapons systems to Ukraine like anti-armor and ground-to-air missiles — all at your expense.

While the money flowing into Ukraine, which is arguably ending up in the hands of criminals and terrorists, is certainly egregious enough, the West’s sanctions on Russia are causing a firestorm of suffering for hundreds of millions of people.

Just out of curiosity, all the folks with the ?? emojis in your profile, you still okay with paying triple for utilities and fuel, watching Europeans freeze this winter, all while your currencies collapse? To do your part, of course…

Since the US began sanctioning Russian energy, the cost of electricity in the US and Europe has skyrocketed. Some folks have seen their utility bills triple, quadruple, or worse. In Europe, even before the war, countries were already suffering with high energy prices but now it’s gotten to the point where millions can no longer afford to pay their bills at all.

In the meantime, the sanctions are actually helping Russia who is having no problem selling its oil to China and India.

“We have not lost anything and will not lose anything,” Russian President Vladimir Putin said at a speech before the Eastern Economic Forum in Vladivostok this week. “In terms of what we have gained, I can say that the main gain has been the strengthening of our sovereignty.”

“Now we are seeing how production and jobs in Europe are closing one after another,” Putin said, pointing out that this is happening as “Western elites, who would not, or even cannot acknowledge objective facts.”

Putin explained that the sanctions are what have led to the closure of Nord Stream and he is not attempting to starve Europe of energy. He said that restoring the flow of gas back to Europe is as easy as releasing the necessary parts for the safe and proper functioning of pipelines operated by Gazprom.

“Give us turbines and we’ll turn on Nord Stream tomorrow, but they won’t give us anything,” Putin said. “There are contractual obligations and if there are any political decisions that contradict them, then we simply won’t fulfill them. We won’t supply anything at all if it contradicts our economic interests, in this case. We won’t supply gas, oil, coal or heating oil.”

The West would rather see their citizens “freeze” than acknowledge the grave effects of their sanctions, according to Putin.

?? Europe sacrificed in name of preserving US dictatorship ?? pic.twitter.com/EeSn1Aa4nS

As stated above, this entire debacle could have been prevented. Even after the invasion began, there was a way out but the US advised Ukraine not to accept it. Now, as the West faces rolling blackouts, food shortages, supply chain disruptions, and are threated with arrest for turning up their thermostats this winter, the ones responsible for maintaining this madness are laughing all the way to the bank.

In the meantime, your family could freeze to death, starve, or die of heat exhaustion — and your governments are perpetuating it. For Ukraine!

Previous :With ‘governments’ the biggest mass murderers in history, and these commies loving their ‘false flags,’ beware a massive false flag dead ahead to finish the destruction of America
Next : As in 2020, Trump speaks to tens of thousands and Biden speaks to tens
Receive Our Free Email Newsletter