LEFT IN THE DARK: European businesses forced to close as energy prices skyrocket 10 times over

(Natural News) Outlandish energy bills are pouring in across Europe. Small businesses are being forced to shut down for good, as energy costs multiply to unsustainable levels. Small business owners from the UK and Ireland have been flooding the internet with photos of their shockingly high energy bills. The Poppyfields café in Athlone, Ireland went viral after posting a photo of their near €10,000 energy bill. The small café must pay nearly $10,000 every two months just to keep the lights on. The energy crisis in Europe has driven electricity prices up 250 percent over the past twelve months. It’s about to get much worse, as the winter season draws near.

UK braces for “terrifying” winter of blackouts and bankruptcies

In the United Kingdom, Britons are bracing for energy bill increases of 80 percent. Britons are being disillusioned by the government’s “energy caps” that the government continues to raise anyway. According to Cornwall Insight, the “energy cap” is set to rise 80 percent in October (£3,549). The energy cap is projected to raise again early next year (to £6,600). As such, Britons are preparing for a “terrifying” winter of outages, blackouts and bankruptcies.

According to Caroline Abrahams, charity director of Age UK, “‘It’s a truly frightening prospect and one that most could not have prepared for, and never expected to face at this point in their lives,” adding “I think a lot of older people will be utterly bewildered that it has come to this and will also feel badly let down, and I can’t say I blame them.”

The elderly are more likely to use more energy to keep their homes warm. To ease the burden, the UK government is looking to protect their own, with a £1,000 boost to their state pension payments for retired state employees. However, any attempt to rescue people with more inflationary spending will not solve the energy shortage. The United Nation’s war on farmers and fossil fuels will continue to choke more people into poverty. The European Union’s sanctions against Russia will only cause further blow-back, causing energy shortages and economic fallout. The new liberal world order and all these antiquated, socialist economic policies will have devastating consequences for the poor and middle class and the small business owners.

A popular British restaurant, Firebrick Brasserie, announced it must close its doors due to the extreme energy costs ravaging the country. The owners wrote a farewell online: “It has been a very difficult few years with Covid but the last few months with the loss of business due to the cost-of-living crisis, the huge increases in our costs, and the completely ridiculous energy prices that companies are charging — there is no price cap for businesses!!– have meant it is no longer sustainable for us to continue. We have tried so hard to make it work and we are devastated that it has ended this way and so abruptly.”

Poppyfields café in Athlone, Ireland is on the verge of shutting down after their energy bill spiked. 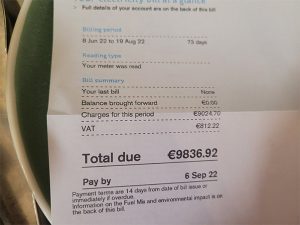 A small business that has been in the UK since 1982 is on the verge of shutting down after the electricity bill came back ten times its usual amount. The bill jumped from £900 to £10,058.59! 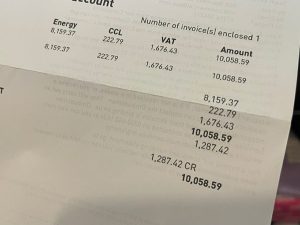 Individuals who make reasonable salaries are suddenly unable to pay for their basic cost of living. One man went online to show how his £126 a month energy bill jumped to £621.54, making it unaffordable to live, even on a good salary. 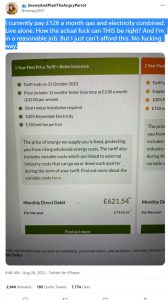 A beloved chip shop went from paying £1,200 a month for electricity and gas to around £5,200 a month. The sudden spike in energy costs forced the small business to close. A popular tea shop was also forced to close. The owners wrote online: “Closed our tearoom we’ve successfully run for 7 years due to increasing costs in food/petrol/ utilities. Can’t sustain the hikes.” The owner said the tea room “provided much needed cheer” over the past two and half years and was a great place for single people to meet others and have someone to talk to.

Previous :Studies show that COVID vaccines cause BLOOD DAMAGE
Next : PHARMA RACE WARS: While Pfizer places all races at risk with their COVID vaccines, WHITES and ASIANS are NOT allowed to apply for Pfizer’s fellowship grant program
Receive Our Free Email Newsletter