(Natural News) If you needed any more proof that the deep state operatives running the regime of our dementia president hate the country they supposedly represent, this should do it.

According to several U.S. military whistleblowers, American units are being stripped of their weaponry and ammunition so that they can be sent to Ukraine in order to be destroyed by Russian attacks.

“A sampling of some of the messages I’ve received. Weapons and ammunition are being stripped from active duty units all over the world and being sent to Ukraine. What I actually found the most interesting was the Governor of New York is sending their Guard’s MREs to Ukraine,” the Twitter account of Terminal CWO posted along with several screen grabs of whistleblower messages.

A sampling of some of the messages I’ve received. Weapons and ammunition are being stripped from active duty units all over the world and being sent to Ukraine. What I actually found the most interesting was the Governor of New York is sending their Guard’s MREs to Ukraine. pic.twitter.com/zBtY49qtKT

“Extremely concerning. More and more reports are surfacing of the U.S. military ‘demilitarizing’ active duty units — stripping them of their weapons to send to Ukraine,” reports Revolver News. “One suspects big handouts to the defense military-industrial complex will soon be on the way — but with the collapse of manufacturing expertise, is the U.S. still capable of making these weapons at scale?” 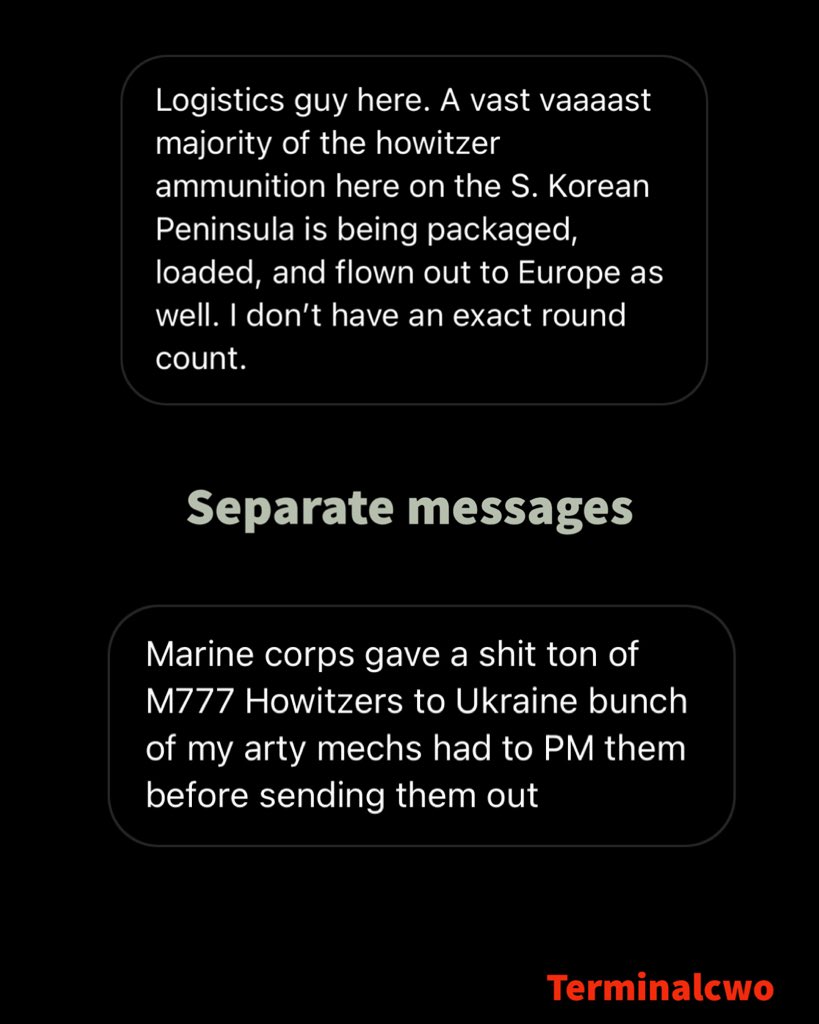 “In a twist I didn’t expect this early, the US military is starting to withdraw equipment in active service to send to Ukraine,” the account noted.

In a twist I didn’t expect this early, the US military is starting to withdraw equipment in active service to send to Ukraine. pic.twitter.com/S51c5Qn5jc

But — can these accounts be trusted? According to a reliable intelligence report, yes.

“Social media account Terminal CWO reported that U.S. Special Forces teams are being told to pack up equipment and prepare it for shipment to Ukraine, on the orders of the Secretary of Defense. There’s also a report that High Mobility Artillery Rocket System (HIMARS) are being diverted from Marine Corps units and sent to Ukraine,” Forward Observer noted in a Tuesday report, with follow-on analyst comment.

“Terminal CWO has a history of accurate reporting, often publishing first-hand takes from members of the military on everything from substandard housing and soldier safety to the fallout over vaccine mandates. I believe this report is accurate due to a history of accurate reporting and because it fits with other efforts by the Department of Defense to provide military support to Ukraine,” the analyst, Mike Shelby, founder of Forward Observer, added.

“The HIMARS is a lynchpin weapons system for the Marines’ new Littoral Combat Regiments in the Pacific – formed specifically as the primary ground combat units to defend Taiwan and Japan against Chinese military operations. If the Biden administration is stripping Marine units of HIMARS then it is unlikely they are serious about countering China in the Pacific. It appears that U.S. military readiness is being depleted to equip Ukrainians for a much-speculated counteroffensive in the south of Ukraine,” he added.

Previous reports have noted that the Biden regime is seriously drawing down strategic U.S. weapon systems.

In May, Natural News reported that the U.S. military was sending an unusually high number of sophisticated Javelin anti-tank missiles to Ukrainian forces — enough to concern military planners and suppliers both at a time when China is becoming more belligerent over Taiwan.

“[T]he problem is this: The Pentagon’s Javelin stocks are running low and thanks to decades worth of off-shoring U.S. industrial production, combined with the current manufactured supply chain crisis, the U.S. military cannot quickly replace them, according to a leading Republican lawmaker,” we reported.

The Biden regime is purposely depleting the U.S. military. The question is: Why?

Previous :DOJ Releases affidavit used to justify political raid on Trump’s Mar-a-Lago residence and it looks just like you thought it would
Next : Another major U.S. steel plant to close after more than a century in operation, further depleting country’s manufacturing capacity
Receive Our Free Email Newsletter