USA has 3rd highest murder rate in the world, unless you subtract the five biggest Democrat-run metropolitan cities, and then we’re 189th out of 193

(Natural News) Democrat politicians celebrate crime, abortion, racial divides and riots in metropolitan cities across the country. Why? Ever notice there’s a liquor store, pornography shop and pawn shop at almost every busy intersection in the biggest cities? There is good reason for all that, as it drives hate, self-indulgence, immediate gratification, violence, immorality, theft, pedophilia, trans-everything and drug use.

Just take a ride through the busiest cities in America and you will see the littered streets of chaos, especially in the Democrat-run cities of Chicago, Detroit, Washington DC, St. Louis and New Orleans. Simply remove these 5 cities from the murder statistics of the USA and we’re barely even on the map anymore, and the Democrats want gun control? Come again?

Murder rates are the highest in the murder capitals, of course. Criminals, druggies, alcoholics and violent Leftists don’t work regular jobs to survive. They steal, kill and deal drugs. They love riots, as it’s a free ticket to steal and not get caught. Even if they get caught, some George Soros-funded DA will let them off without even slapping their wrist.

These same violent, brain-dead Americans will vote Democrat, if they can figure out how to vote, every time, so they can get free food, free money and not get prosecuted for their crimes. It’s a win-win situation for Democrats, and lose-lose for everyone else.

Drive 30 minutes outside of any major city and the crime rate plummets to next-to-zero. The only reason the United States ranks 128th in safest countries of the world, according to the Global Peace Index, is because of a handful of horrifically violent Democrat-run metropolitan cities. Period. The biggest factor in figuring this “safety” gauge is the murder rate.

Social media influences violence and murder in the big cities, but not so much in rural areas

Murder, attempted murder, assault and rape is much more prominent in big cities run by Democrats than in small cities or rural areas, throughout the USA. Most metropolitan cities are overrun by gangs, including ethnic gangs and Antifa/BLM. Social media helps criminals and conspirators plan staged events, riots and domestic terrorism. All of social media is biased and distorted to allow Leftists and Democrats to plan evil things, while censoring all of the bad news about it, before, during and after.

Not all murders are planned, but happen when rioters and “protestors” show up to events and parades with weapons. This occurs regularly with Antifa and Black Lives Matters groups, who not only attend their own events and destroy cities and lives, but attend conservative, peaceful events and stir chaos, destruction and murder. These are often organized terror attacks by US citizens on US soil, and the Democrat politicians, mass media, social media all promote it.

The failing Biden economy is contributing drastically to increased crime and murder rates, across the board, as well as unsafe school systems (think “safe zones” that invite shooters to go on a rampage), and dangerous housing situations. The pandemic (scamdemic) also bankrupted millions of small business owners and wiped out most people’s savings. 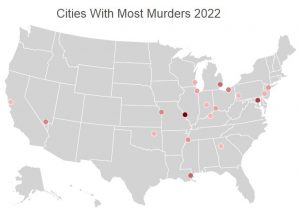 Tune your scamdemic frequency to Censored.news for truth news about Democrat-led violence, murder and mayhem that’s being censored from the rest of media as you read this.