(Natural News) The Leftists and Globalists seem to want nothing more than every American demented, sick, perverted, murder-hungry, and cannibalistic. This becomes quite evident as Americans witness mainstream media now literally pushing for everyone to eat lab-made food, worms and bugs, and wait for it… each other. The New York Times is normalizing cannibalism, as they squirm deeper into their rabbit hole, after pushing this past spring for the now-communist-tilted Amerika to eat grubs and bugs.

First it was, “Why aren’t we eating more insects?” and “They’re high in protein, low in cost, eco-friendly and tasty. And only in the West have we resisted them.” This was the New York Times before they went “all in” for consuming our fellow Americans.

Maybe it’s the COVID-19 “clot shots” that have driven all the Leftist want-to-be-communists to want to murder human babies and eat barbecue them for meals, with some sautéed crickets and deep-fried roaches on the side. There’s literally an 11-minute video on the joy of eating insects and how they will provide future “food security.”

So now it seems that the food security of America, with all the skyrocketing inflation and supply chain issues, that eating people and bugs is the only way to survive. So it’s eat or be eaten, in other words, according to MSM and the elite, filthy-rich globalists who are deconstructing our Republic piece by piece.

We must save the climate, they declare. Eat people and bugs, say the “environmentalists” and “academics” who believe the only sustainable food system model involves killing all babies in the womb, then turning them into food and other forms of “beyond” meat. Bill Gates leads the way (not by model, of course) in propagating all food to be lab-concocted, test tube meat. This is the real reason for the food shortages and the upcoming economic tsunami.

The only way, the Left believes, to stop global warming is to eat people and bugs, while blocking the sun with chemtrails while killing all babies, while ending all fossil fuel production. So soon, we’ll all be driving our electric cars to “work” at the Soylent Green factories on the dark days when we can’t see the sun anymore. Sounds terrific.

New York Times, “Turns out, cannibalism has a time and place”

According to the Left, men can get pregnant, the earth is getting so hot we need to block out the sun, and times are so hard we need to eat people to survive. Because shows and movies depict demon people eating human flesh, somehow the pandemic and climate change narratives are suddenly fueling the desire for all Americans to eat the kinfolk as part of the three square meals each day.

The fake world of social media has a torrent of new comments going “viral” trying to justify and normalize cannibalism. “I feel like the unthinkable has become the thinkable and cannibalism is very much squarely in that category of the unthinkable,” one commenter posted. The New York Times’ “Style” section recently published a piece called “A Taste for Cannibalism?” – suggesting modern culture has brought us to this place, where we seriously consider eating each other to save the world from sure destruction, which sounds like sure destruction in and of itself.

The seriousness of the article in the New York Times explaining cannibalism, having its “time and place” is alarming, but then again, somewhat predictable, as the “Demoncrats” of America keep spiraling down their dark holes of murder, mayhem, and perverted ways. Still, patriots of this country won’t let them turn the whole thing into a socialist hell-hole without one heck of a fight.

Here are some of the tweets and responses to the NYT cannibal drive. 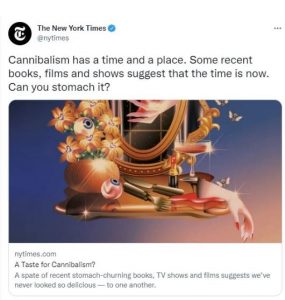 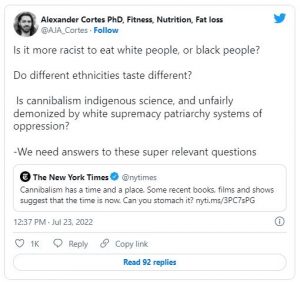 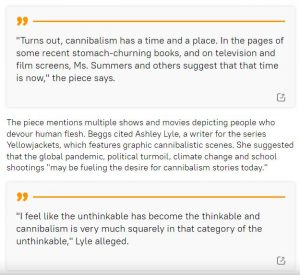 Can the “extreme liberals” say “Soylent Green” without choking on their COVID mask? Must be why the Democrats love abortions, even on the day of birth. To them, they’re the “future of food!”

Here’s a trailer from 1973 movie called Soylent Green about US cannibalism — ironically predicted 50 years ago for the current year 2022:

Tune your food news frequency to FoodSupply.news and get updates on more toxic foods and food shortages coming to stores near you.

Previous :VACCIDENTS: US traffic fatalities SKYROCKETED across the board in 2020 and 2021 – reaching highest level in decades, according to Federal Agency
Next : Propagandists now try to position COVID vaccine “Novavax” as HERBAL medicine after realizing public has lost all faith in deceptive pharmaceutical industry
Receive Our Free Email Newsletter