VIRUS MANIA PART II: Anthony Fauci is just the latest in a long line of virus hucksters and con artists going way back in history

(Natural News) It is true that Anthony “Fraudulent” Fauci is at the epicenter of the SARS-Coronavirus scamdemic that has cost millions of lives around the globe while padding the pockets of Big Pharma gurus around the planet, including himself. Fauci was instrumental in funding the research for “gain of function,” that enabled a strictly animal virus to spread to humans.

Yet, that was just the fulcrum of the real pandemic that would follow – that of mass vaccination, where injecting or creating (mRNA) billions of spike protein prions leads to vascular damage for the “gene-therapy-treated” humans who bought into the COVID-19 scamdemic, that was based and propagated on fear-mongering that spread like wildfire. This “pandemic” is just like every other infectious disease scare we’ve encountered over the past three centuries. Anthony “Fraudulent” Fauci is just the most recent huckster and con artist to reach the front of the line in a long line of charlatans and pharma shills.

“The primary purpose of commercially-funded clinical research is to maximize financial return on investment, not health”

The richest and most powerful people on Planet Earth function mainly in one or more of three industries: oil, tech/media, and pharma. This is no secret, but the way they get rich in the pharma realm is covered up, because what the majority of Americans believe are medicine and vaccines are in reality WEAPONIZED treatments that make you sick, sicker and/or dead. Patients who follow the general advice of medical doctors (including pediatricians), oncologists and surgeons often find themselves in deep water, with no ‘life raft’ in sight. Their health deteriorates quickly while the doctors point at incurable, ‘genetic’ issues, only treating the compounding, horrifying symptoms of the very ‘medicine’ that’s been prescribed, including all vaccinations.

“The primary purpose of commercially-funded clinical research is to maximize financial return on investment, not health.” That quote comes from the foreword of an amazing, whistle-blowing book titled, Virus Mania: How Big Pharma, Media Invent Epidemics. This corrupt model of Western medicine is an epidemic based on fear, not viruses or bacteria.

Back in the 1800s, when “germ theory” was first propagandized to scare the masses, fear campaigns began to take root in America, and they were already enough to propel chemical medicine to the forefront – weaponizing an insidious cash cow this country had never experienced before. This is how “epidemics” and “pandemics” are invented.

Measles fear-mongering began in the 1700s and continues today

Back in the 1600s, measles first appeared and was documented in Boston. By the 1700s, scientists who were able to reveal the infectious nature of measles also instigated the propaganda machine that would turn a minor amount of measles deaths into a bloated, inflated statistic to scare the world to death (pun intended). Government health officials would later claim that for every 1000 kids who got the measles, one or two would die. That was a lie. The CDC and mainstream media still push this fabricated falsity today.

The truth is that the odds of dying from measles are equivalent to drowning in a swimming pool, or tripping down a flight of stairs. The mortality rate of measles plummeted long before the measles “vaccine” was supposedly discovered in 1962 by Maurice Hilleman, a Merck pharma shill.

The measles vaccine, in other words, is the “pandemic” that causes detrimental, chronic health problems that drive mass profits for the pharma machine. The vaccine is what to worry about, much more so than the measles virus itself. Far from ever being “safe and effective,” the measles live virus vaccine, made by Merck, is given to 1-year-olds and 4-year-olds as a two-part series to make sure those children stay infected and sick throughout their childhood, developmental years. How?

Human albumin is also purposely concocted in the measles jabs. This is the protein portion of blood from pooled human venous plasma, and when injected causes fever, chills, rash, hives, severe headaches, nausea, breathing difficulty and rapid heart rate. Injected human albumin into humans can also result in a loss of body cell mass and lead to immunodeficiency virus infection. That human albumin might also contain SV40, AIDS, cancer and/or Hepatitis B from drug addicts.

Maurice Hilleman did NOT discover a “vaccine” for measles, but rather a weaponized jab for infecting children, teens and adults en masse

Maurice Hilleman did NOT discover a “vaccine” for measles, but rather openly admitted on tape that these vaccines given to Americans are contaminated with leukemia and cancer viruses. He was literally caught laughing about it. He said because they first tested this dangerous jab in Russia, that the Russian athletes competing in the Olympics would easily lose because they would all be “loaded down with tumors.”

The measles vaccine actually spreads an attenuated version of the measles in order to effectively spread the pandemic propaganda. That’s how these pharma hucksters all function, through the spread of fear using rather harmless versions of viruses. Then the vaccines inflict the chronic damage (think MMR here) that rakes in the profits for the pharma industrial complex, also known in the USA as chronic sick care. This is why “epidemics” and “pandemics” are invented.

That’s why Fauci is just the newest huckster in the long line of pharma shills and charlatans that push toxic “vaccines” as the medicine for the very fear-based pandemics they create, manipulate, push so heavily using the mass media complex and the CDC for the scripted narrative. Check out the book Virus Mania for an in-depth look at the propaganda machine behind every epidemic and pandemic we’ve ever known. 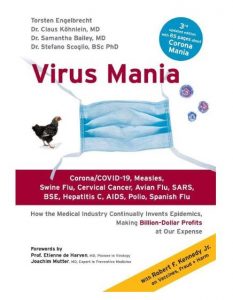 Bookmark Censored.news to your favorite websites for truth news that’s being censored from the rest of media as you read this.

Dr. Robert Malone: Boston University broke the rules by creating COVID strain with 80% death rate
Fauci calls for Beijing to be transparent about COVID origins
The Lancet’s “Covid-19 Commission” decides that covid may have come from a U.S.-run biolab after all
Fauci “knew” he was funding illegal gain-of-function research, says former CDC director
Lawfare with Tom Renz: Two-tiered system destroying the credibility of America’s judiciary – Brighteon.TV
Senator Rand Paul goes head-to-head with Anthony Fauci over COVID-19 vaccines
Unethical Wuhan virology (bioweapons) experiments may be moving to Boston, Massachusetts, with new grants issued to Peter Daszak and covid-19 conspirators
Biden’s coronavirus adviser says the reason why God created humans with two arms is to receive a flu shot in one and a covid jab in the other
The disastrous high-tech war on a pathogen
Col. Lawrence Sellin: Lab-created COVID-19 is part of China’s biowarfare program