AstraZeneca widow strikes out at the mainstream media…

(Natural News) Musician Vikki Spit lost her bandmate fiance to the vaccine and was actually awarded £120,000 by the U.K. for her loss.

This should be a major story, but of course, the mainstream media is downplaying the issue and playing it off as a one-off and a local news story.

The vaccine is still “safe and effective”, the Mockingbird media coos in unison. 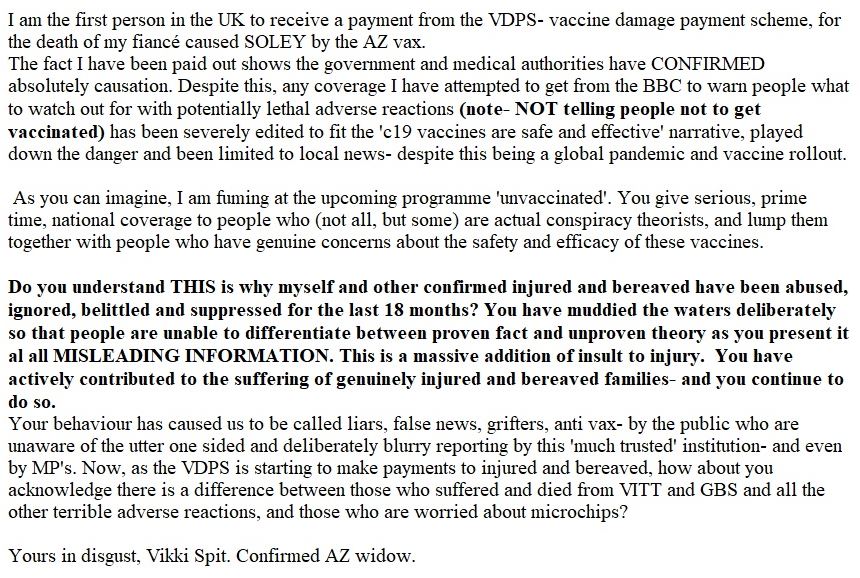 Even the BBC has covered her story, while still downplaying the risks of the vaccine:

Vikki Spit, from Cumbria, became the first person to be awarded money, following the death of her fiance Zion, who developed vaccine-induced immune thrombotic thrombocytopenia (VITT) eight days after having the jab.

VITT causes a very unusual combination of blood clotting and low platelets (part of the blood that causes clotting), leading to excessive bleeding. An even smaller number of these cases can be fatal.

There have been 444 cases of blood clots with low platelets out of 49 million AstraZeneca (AZ) doses given, and 81 deaths, although we don’t know that all were caused by the vaccine.

The risk of a healthy but unvaccinated 40-year-old man dying if he catches Covid is about 500 times higher.

But while there is no doubt the vaccines have been lifesaving on a population level, affected families are frustrated as they feel the small minority for whom the AZ vaccine has caused harm are being ignored.

While it is critical that the U.K. actually admitted that the vaccine causes deaths, the tiny settlement she received was grossly inadequate:

A woman whose partner died after having an AstraZeneca jab has become the first person to receive compensation over a Covid vaccine death.

Vikki Spit’s former rock singer fiancé Zion, 48, of Alston, Cumbria, fell ill eight days after he had his injection and died in May 2021.

She was awarded the maximum settlement of £120,000 but said it was not enough.

The 38-year-old said she had got into debt after losing Zion’s earnings and should have had closer to £180,000.

She said: “I am still heartbroken by the sudden loss of my partner of 21 years, and alongside this emotional trauma, I have also been faced with financial hardship as a result of the loss of Zion’s contribution to household finances.

“There just isn’t the proper financial aid coming from the government to support those who have lost family to the vaccine.”

She also said the compensation did not take into account spiralling inflation.

Read the rest from BBC…