The Washington Post capitulates before an unruly online mob

Zakaria who is a known Democrat sympathizer and hosts a weekend show on CNN issued a stark warning to the Democrats.

Zakaria referred to serious issues that plague the US including the crumbling infrastructure, a fragile economy, and social problems.

Zakaria conceded that “The Democratic Party has moved left, that it is out of sync with Americans” and that “it needs to correct course.”

Zakaria cited journalist David Leonhardt’s analysis of a New York Times poll that “Democrats — both politicians and voters, seem more focused on divisive cultural issues than on most Americans’ everyday concerns, like inflation.”

Zakaria added that “Democrats have become paralyzed by their own ideas and interest groups, and no one seems able to break through and get things done.”

Zakaria warned the Democrats that GOP leaders such as President Trump are “clever at weaponizing the words of a few left-wing Democrats and branding them as the face of the party.”

Zakaria concluded his piece by cautioning the Democrats that “This is not a perception problem. It is a real problem. Democrats need to once more become the party that gets stuff done, builds things, and makes government work for people. That’s a lot more important to most Americans than using the right pronouns.”

The piece proved how panic-stricken the Democrats are not just about the midterms but their overall prospects in 2024.

Zakaria tweeted about his article with a caption that “getting stuff done” is “a lot more important to most Americans than using the right pronouns.”

Democrats need to once more become the party that gets stuff done, builds things and makes government work for people. That’s a lot more important to most Americans than using the right pronouns.

The mention of the word “pronouns” in the piece launched a thousand outrages among the woke mob.

Democrats need to once more become the party that gets stuff done, builds things and makes government work for people. That’s a lot more important to most Americans than using the right pronouns.

Buttigieg said that the “democrats can walk and chew gum,” and “We can fix roads and build bridges while also making it a little easier to go about your life.”

Addressing someone by the name/pronoun they prefer is free, easy, and kind. Using them builds community and belonging. Democrats can walk and chew gum. We can fix roads and build bridges while also making it a little easier to go about your life. That’s called freedom.

Zakaria pleaded with Buttigieg that “I am arguing against giving Republicans an easy way to demagogue.”

I hope it is clear that I am NOT arguing against any minority groups. (I belong to several myself.) I am arguing against giving Republicans an easy way to demagogue and divert attention. If the Democrats are wiped out in the midterms, it will not help these embattled groups any!

This is a wild misreading of that Times poll to begin with, but if you conflate civil rights with pronoun etiquette and are completely unaware that you’re parroting a transphobic GOP talking point, maybe step back from the keyboard. pic.twitter.com/CtxxugbWnj

Why are we acting like we have to choose between building things and using the right pronouns? Do both. https://t.co/deHIFtHSRF

Oliver Willis of The American Independent accused Zakaria of being a bigot.

Republicans are going to always be bigots. You make their job easier when you tell Democrats to not do the bare minimum and stand for equality. https://t.co/HGwvveXH5Z

Democrats suck in many ways but they’re the only one of the two major parties in America that shows some support for basic equality and they should constantly be pushed to do MORE not less of that out of craven (and wrongheaded) political concerns. 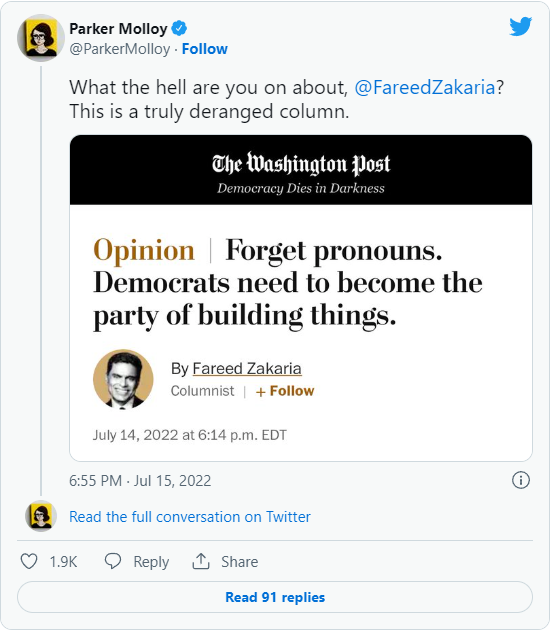 Oh fuck this. We can do all that while respecting who people are.

Also notice the rhetorical trick here: reduce trans issues to “pronouns” and dismiss it as silly. Stops you from having to consider that Republicans are hellbent on making it easier to kill us. https://t.co/J2AzuS27Lm

By Friday evening, the WaPo altered its headline to “Democrats need to become the party of building things” and the mention of pronouns was removed. While the contents of the article remain as is, don’t be too surprised if there are either edits to the text or a lengthy footnote added, or both.

It was ironic that the woke mob that attacked Zakaria with myriad pejorative epithets actually proved his point that the modern Democrats remain so focused on the trivial of a few that they disregard the crucial and the vital of all.

So why did WaPo capitulate before the mob so easily?

The Washington Post has over the years developed a loyal subscriber base who read the paper to have their biases confirmed. The WaPo is now an organization of the Democrats for the Democrats and by the Democrats.

The base also demands total adherence to the group think. Questions, slight deviations, or doubts, however insightful and subtle they may be, are always unwelcomed. There is a complete consensus among every employee of the WaPo on the issues. It almost appears like a totalitarian cult.

Early this year, Veteran newsman Ted Koppel rightly called out the news media outlets such as the WaPo and the NYT for their brazen bias. But the cults instead ridiculed Koppel for his factual diagnosis.

Matters have deteriorated to such an extent that fellow liberals such as Zakaria are slammed as bigots for stating the obvious for the well-being of the party.

The WaPo felt compelled to change their headline because they dare not cause disharmony in an echo chamber and run the risk of backlash and cancellation of subscriptions.

The same paper never felt compelled to issue retractions or make changes to the many spurious stories that it carried about President Trump.

The New York Times also capitulated before an online mob a few years back to alter their headline not once but twice for an already anti-Trump story. The mob was outraged that their headline wasn’t vicious and hateful enough.

This is because both the NYT and the WaPo know their subscribers would rather read a surfeit of spurious articles that confirm their bias instead of objective reports that present inconvenient facts.

This isn’t only about a biased and corrupt news media, there are serious consequences for the future of democracy.

It is most troubling for a democracy when a section of the public prefers to bury themselves deep in echo chambers and remain impervious to facts and averse to differing perspectives.

A democracy needs well-informed voters to elect representatives based on their merit and not just a brainwashed cult that votes for anybody with ‘D’ after their name.

The relentless brainwashing has worked, because the Democrats now have permanent control of two major states of New York and California, irrespective of performance. The result is the likes of AOC and Gavin Newsom being elected.

The long-term goal is to implement what they have achived in New York and California, nationally — i.e., brainwash enough voters to have permanent control over all branches of government irrespective of their performance.

It is essential that this cult isn’t allowed to grow.