A game of labels: Media chide Abe while praising dictators/terrorists

(Natural News) In the wake of the assassination of former conservative Japanese Prime Minister Shinzo Abe on Friday, elements of the liberal media made sure to get their kicks in as they slapped on nasty labels to show their disgust with his politics. This comes in contrast to their glowing words and emotional goodbyes to communist dictators and murderers, and Muslim terrorists.

The anti-Abe pronouncement getting a lot of attention on Friday was NPR’s now-deleted Tweet describing the recently murdered world leader as a “divisive arch-conservative.” In the replacement tweet, they still had the knives out as they smeared him as an “ultranationalist.”

And in the piece itself, international correspondent John Ruwitch used the “ultra-nationalist” [sic] label again and left kinder words to people like Indian Prime Minister Narendra Modi who said Abe was “a towering statesman, an outstanding leader, and a remarkable administrator.”

Even in American politics, NPR couldn’t be bothered to cover the attempted assassination of U.S. Supreme Court Justice Kavanaugh. But in 2016, an NPR reporter described getting a kiss from the murderous communist Castro brothers of Cuba as the “blessing of the Holy Trinity.”

Another infamous headline for the death of a murderous lunatic was when The Washington Post mourned the death of ISIS founder Abu Bakr Al-Baghdadi, calling him an “austere religious scholar at helm of Islamic State.” The paper had to be shamed into changing the headline and making an apology.

For Abe, The Post put out a tweet with a graphic saying he “leaves behind a mixed legacy.” Though in a follow-up tweet, they noted he was in the “Liberal Democratic Party,” possibly because they like those labels when viewed through the prism of American politics rather than the policies they promote in Japan. 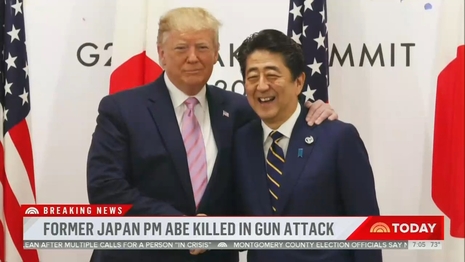 CBS Mornings got in the Abe bashing with foreign correspondent Elizabeth Palmer declaring him a “polarizing figure” and “a right-wing nationalist and conservative” because he was a “fierce supporter of Japan’s military.”

NewsBusters has amassed a trove of instances of Palmer showing reverence to the murderous remiges of Iran (such as here, here, here, and here). In one, she touted the “epic salute to Qasem Soleimani,” the Iranian general. “Iran’s Supreme Leader Ali Khameini wept as he led the prayer service for his friend and ally, the man he had worked with so closely to expand Iran’s influence across the Middle East,” she lamented at the time.

In another instance of a veteran network reporter gushing for murderous monsters, following the ironic death of communist butcher Fidel Castro on Black Friday, NBC chief foreign correspondent Andrea Mitchell shared her fond memories of him:

But on Friday, NBC wanted to use Abe’s assassination to score political points here at home by making it about “gun violence.” And yet they would drown out the attempt against Kavanaugh with January 6 coverage.