Daszak, 49, appeared to play a critical role in the origins of COVID-19, as his organization, the ‘EcoHealth Alliance’, facilitated a “longtime” joint research effort with the Wuhan Institute of Virology, which is believed to be the source of the virus. Throughout the pandemic, Daszak also featured prominently in promoting the “natural origins” theory while simultaneously discrediting supporters of the “lab leak” theory, most notably in the role of the World Health Organization (WHO) COVID-19 investigator.

His latest study appears to be yet another controversy. Daszak, who is originally British, is listed as the sole U.S. researcher on the paper: “Identification and Genetic Characterization of MERS-Related Coronavirus Isolated from Nathusius’ Pipistrelle  Near Zvenigorod (Moscow Region, Russia).” 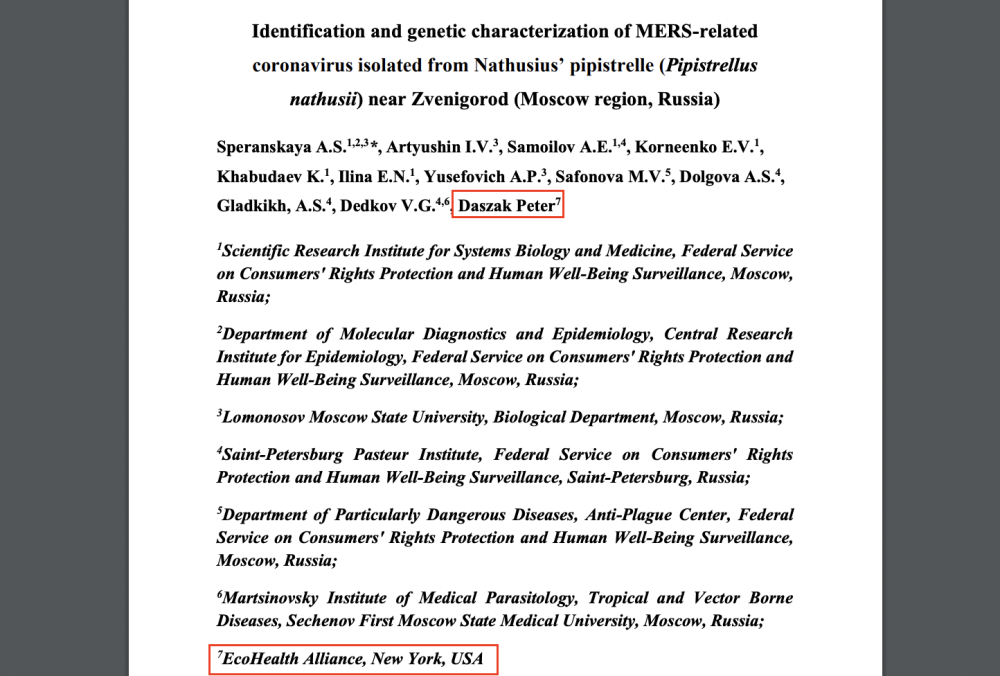 The paper was published on June 10th 2022 and counted an additional 11 Russian researchers from Kremlin-run facilities including the Federal Service on Consumers’ Rights Protection and Human Well-Being Surveillance and Moscow State University.

The study was funded by the Russian Foundation for Basic Research, the national science funding body of the Russian government, and the state-run Russian Science Foundation.

Researchers conducted “analyses of bat viromes,” which “have been used to identify novel viruses with potential to cause human infection.”

“We characterized the fecal virome of 26 samples collected from six bat species captured during 2015 in Moscow Region. Of these 13/26 (50%) samples were found to be coronavirus positive,” continued researchers.

“We sequenced and assembled the complete genome of a novel MERS-related Betacoronavirus from Pipistrellus nathusii, named MOW-BatCoV strain 15-22.”

The capture and sampling of bats were carried out by Moscow State University researchers in the summer of 2015.

Appearing to use similar tactics as researchers at the Wuhan Institute of Virology, the Russian scientists and Daszak focused on the spike protein. The spike protein allows viruses to penetrate host cells and cause infection and is believed to have been manipulated by researchers in Wuhan to become more lethal to humans.

“To predict and analyze the interaction of MOW-BatCoV Spike glycoprotein with DPP4 receptors of the different mammalian species, the three-dimensional structures of these proteins were obtained by homologous modeling. The DPP4 proteins of two bats (Myotis brandtii and Pipistrellus kuhlii), the hedgehog (Erinaceus europaeus), domestic cat (Felix catus) and mouse (Mus musculus) were used for analysis,” explains the paper.

Analysis of the complete genome of the novel coronavirus discovered in the paper shows that it “falls into clade of human/camel’s MERS viruses together with a few bat viruses.”

Previous :Lab-grown meat: Investors love it, but scientists question safety
Next : While the CDC pretends homosexuality isn’t to blame for Monkeypox, the UK faces reality
Receive Our Free Email Newsletter