(Natural News) Have you ever read the vaccine insert that offers warnings about side effects, adverse events and allergic reactions? Doctors and nurses are supposed to be sure the patient reviews this before being injected, but how often does this ever happen? What if you found out there’s a history of people needing cancer tumors surgically removed that developed at the vaccine injection site, some within weeks of the shot? Whether a vaccine is injected into your shoulder, thigh, lower back, flank (side) or buttocks, it is NOT UNCOMMON for sarcoma cancer tumors to develop at the site of injection, and that goes for humans and their pets (dogs and cats), according to pediatricians, military doctors and veterinarians.

Be forewarned: Persistent scab at vaccine injection site can become cancerous in just weeks or months

From HPV to Hepatitis B, and from polio injections to tetanus shots, doctors have recorded and documented sarcoma cancer tumors developing at the site of injection, and the cancer does not take very long to start rearing its ugly head. Normal cell growth gets interrupted by deadly toxins used to manufacture vaccines, including genetically modified viruses, altered bacteria and several adjuvants (toxic carriers) and emulsifiers used to foster and stimulate immune reactions. These cancerous lesions have roots that grow deep over time, making them tougher for surgeons to remove safely.

These sarcoma cancerous tumors occur in connective tissues (usually muscles) and can metastasize over time (called fibro-sarcomas). They begin at the site of the vaccine injection, as the body tries to encapsulate the toxic contents of the vaccine by surrounding them with calcium, in an attempt to prevent further damage that would occur from the toxins and the cancer spreading.

Many carcinogenic vaccine ingredients, as listed on the CDC vaccine excipient web table, include but are not limited to, aluminum, mercury, recombinant human albumin, formaldehyde, industrial-based dyes, urea (animal urine), polysorbate 80, bovine albumin, infected African Green Monkey cells, latex and the list just goes on and on. No wonder the site of injection becomes infected and cancerous, along with other parts of the body. Got a scab at the vaccine injection site that just won’t go away? May be cancerous, but the vaccine warning label does NOT forewarn you, and neither do the doctors and nurses.

Doctors and immunologists always say the same tired excuse about the toxins in vaccines – there’s “not enough in there” to cause any serious problems. Wrong. Since when is a malignant, sarcoma cancer tumor at the site of the vaccine injection not a serious problem? The adjuvant-loaded vaccines are supposed to conjure up more of an immune system response, but this is the price you pay, and no doctors are warning anyone about it.

This is happening in as many as 1 for every 1,000 patients, including humans and pets in North America and Great Britain. Most of the sarcomas develop after three months, but some have been observed, tested, diagnosed (via biopsy) and recorded within just weeks of injection. This is not just “abnormal tissue” or inflammation, it’s cancer.

Depending on the depth and position of the tumor, amputation of tissue, and even an entire limb, could be necessary. Doctors have said that post-vaccination sarcomas “tend to recur at the original site,” requiring aggressive surgery, including marginal areas, to save lives. Take a look at a few pictures of cancer as it develops at the site of the vaccine injection. 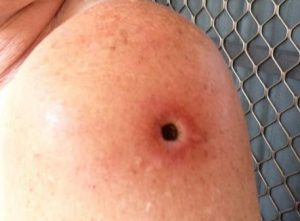 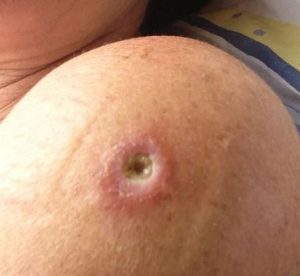 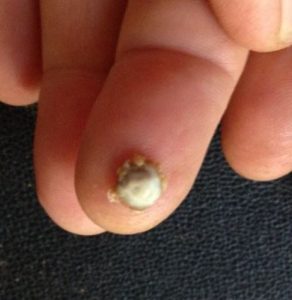 Now doctors are saying that COVID-19 vaccines cause cancer, and not just at the site of injection, but throughout the body due to toxic spike proteins that travel to cleansing organs. Bookmark Vaccines.news to your favorite independent websites for updates on experimental Covid “vaccines” that cause blood clots and other horrific side effects.

Previous :Another vaccine-induced blood clot? Female pro golfer Nelly Korda DARE NOT say the “V” word when speaking about her blood clots
Next : Resident Biden claims GUNS are the #1 killer of children, but actually it’s VACCINES and ABORTIONS
Receive Our Free Email Newsletter