Chimpanzee mother treats a wound on her son with an insect, while human mothers are spotted poisoning their babies with GMOs

(Natural News) Evolutionary biologists studying chimpanzees for seven long years in the Loango National Park, on the Atlantic coast of Africa, have witnessed something extraordinary as the chimps used primitive forms of medicine to treat each other’s wounds. A mother chimp was observed literally examining her adolescent son’s inch-long wound, catching an insect, chewing it open, and applying it like a salve to the cut on his foot, several times. The findings were published in the journal Current Biology.

The researchers believe the insect has sterilizing properties or pain relieving qualities of which the mother chimpanzee must have been aware. After that amazing observation, the researchers and primatologists went on to witness at least 75 other cases over 15 months where great apes applied insects to others or themselves to treat wounds. Studies reveal that insects can and do have pain-relieving, antiviral, antibiotic and anti-parasitic functions. 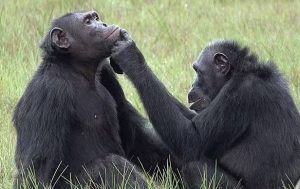 Sure, human parents know to use antiseptic wipes for their baby’s wounds, and they know how to go to the store and buy baby formula to feed their baby nourishment, but how many parents have evolved enough to realize that most baby formula contains pesticides and other toxins that cause cancer, digestive disorders, rashes and allergies?

Corporations that manufacture and process baby food, baby formula and baby personal care products in America not only “cut corners” to increase profits, but they purposely use toxins to cause health issues that make their Big Pharma (partners and cohorts) a fortune when mommies and daddies can’t seem to figure out why their babies are so sick and dysfunctional most of the time. American babies tend to have chronic health issues, including digestive disorders, learning disabilities (think ASD, ADD and ADHD), skin problems, growth issues and developmental complications.

The first thing these ‘evolutionary’ animals (humans) should be examining is the ingredients in their baby’s ointments, lotions, powders, food and formulas. The reason most parents do not investigate these crucial elements is that most don’t realize medical doctors do not take any nutritional classes in medical college, and haven’t for the past century. There is no protocol for understanding what caused the issue and there are no preventative measures taken in America to keep babies from becoming ill in the first place, only ‘treatments’ for chronic issues the MDs will label as “inherited” or “manageable,” but never curable. This is the grand profit scheme created by Big Food and Big Pharma, and it’s not going away any time soon, if ever.

As opposed to Europe where they filter typical toxins from baby formulas, the FDA allows just about anything and everything toxic to persist in baby formula. It’s the opposite of evolution when it comes to caring for human babies, instead of the evolution we are witnessing with great apes. In the USA, most baby food products contain an alarmingly high amount of toxic heavy metals, including lead, arsenic and cadmium. Just take a look at this chart of the differences. 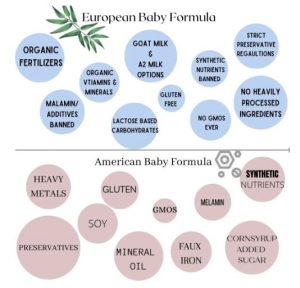 Sure, heavy metals are found naturally in soil, but baby food (and all human food) should all be inspected thoroughly and these toxins limited, if not eliminated, for health purposes, and especially for babies and children in their developmental years.

Nearly half-a-million babies are on record overdosing on melamine that’s found in typical baby formula, as this nitrogen-laden toxin is widely utilized in the processing of plastics and adhesives. What’s in your baby’s bottle and band-aids? Melamine is also used to spike dairy cow milk production. While the FDA claims those levels are low, it all adds up over time, and there’s a cumulative effect that makes big pharma a fortune. What medical doctor in this country explains THAT to parents?

Then there’s soy. Dreaded GMO soy. Once parents figure out all the toxins in conventional milk that cause digestive disorders and allergies for the babies, they switch to pesticide-laden, genetically modified soy ‘milk.’ Big mistake. That kind of soy is laced with phytic acid, genistein and phytoestrogens (deadly hormones and nutrient blockers), not to mention chemical-based herbicides (Roundup with glyphosate).

Gluten is found in many baby foods as well, and it’s loaded with chemical conditioners and pesticides, and it clogs the intestines, causing dangerous constipation and incessant abdominal pain for babies.

Nearly all American baby formula contains deadly high fructose corn syrup, made from GMO corn that contains deadly pesticides inside and out. These corn pesticides are used to dissolve insects’ digestive tract and keep them from reproducing. What do you think it does to human babies? It causes cancer, organ malfunctions, and even birth defects. 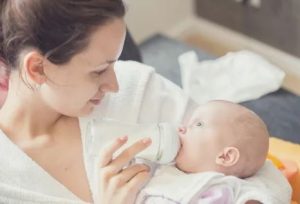 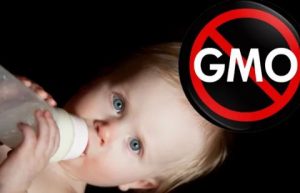 Tune your internet frequency to Pesticides.news for updates on devolved human and baby food that contains bug-and-weed-killing toxins.

Previous :Pediatrician hires HITMAN to KILL her ex-husband for $7,000 but hitman turns out to be undercover FBI agent
Next : Edward Jenner, the supposed “Father of Immunology,” was a complete huckster and fraud who never passed a single medical examination in his life – OpEd
Receive Our Free Email Newsletter

The next great “mass extinction” is already here
Mass extinction event underway across planet Earth as WILDLIFE populations plunge nearly 70 percent in just 50 years
Chickens, cows and more: Things to consider before choosing livestock for your homestead
USDA air dropping vaccines from helicopters across 13 states, using vaccine “bait” deemed HAZARDOUS if ingested
ANOTHER DAY AT THE MAUL: White lion mauls and kills intruder who broke into Ghana zoo to steal rare cub
COVID STUPID: Los Angeles now offering covid tests for seals and other animals including deer, hamsters and raccoons
German protesters demand “right” to have sex with animals, including dogs, horses, boars and anything else they can catch
Study: Pesticides are highly damaging to beneficial insects like bees
The Globalist WAR on the Elements of Life – watch the bombshell new mini-documentary HERE
Pandemic of plastic waste: Animals found entangled, dead in direct contact with single-use PPE