(Natural News) It’s not hard to figure out why Congress does nothing but complain about Big Tech misbehavior and censorship: It’s obvious that the platforms are aligned with the Marxist deep state and the companies that own them with the Washington establishment.

Google-owned YouTube proved that again in recent days by removing a smoking gun video proving that the Obama regime was knee-deep in a plot to depose the duly-elected leader of Ukraine in 2014 because he did not ‘align’ with them or their globalist values.

“It was one of the most-watched versions of the intercepted and leaked conversation between then-Assistant Secretary of State Victoria Nuland and Geoffrey Pyatt, the then U.S. ambassador to Ukraine, in which the two discuss who will make up the new government weeks before democratically-elected Ukrainian President Viktor Yanukovych was overthrown in a violent coup on Feb. 21, 2014,” Consortium News reported this week.

The pair discuss “midwifing” the unconstitutional change of the Ukrainian government and then “gluing it together,” as well as the role then-Vice President Joe Biden ought to play as well as what meetings to establish with conspiring Ukrainian politicians.

The takedown of the video by YouTube also helps explain why the Biden regime is so involved in helping the current Ukrainian government, especially after Biden’s son, Hunter, and some of his corrupt ‘business’ associates were involved in a corrupt energy company that paid them millions of dollars to be ‘board members.’

The U.S. State Department never denied the authenticity of the video, and even issued an apology to the European Union after Nuland is heard on the tape saying, “F**k the E.U.” Mainstream media at the time focused almost exclusively on that off-color remark, ignoring the greater significance of U.S. interference in Ukraine’s internal affairs.

Consortium News has numerous times embedded the YouTube video in articles about the overthrow of Yanukovych. CN successfully embedded it earlier this week in an article now being written, but on Wednesday the video suddenly appeared this way in the draft article.

Embedded in the article is the original YT video with Nuland and Pyatt that now carries the message: “Video Unavailable. This video is not available.”

“The video was posted on April 29, 2014 and had 181,533 views before it was taken down, was among the most viewed versions of the conversation on YouTube. Eight years’ worth of comments on the video have also been removed,” Consortium News noted further.

This is a screenshot taken earlier from the video that has now been removed. 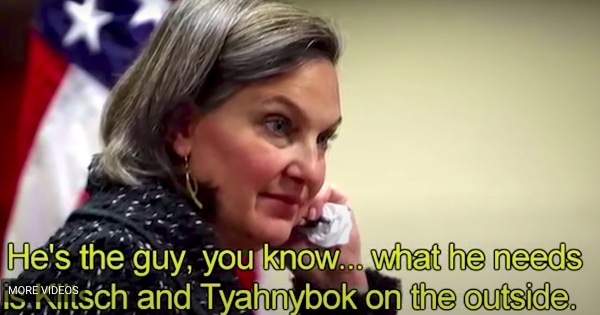 The same video can be viewed on Rumble:

Consortium News noted that the timing of the removal of the video after eight years — and as Russia continues its invasion of Ukraine, with the U.S. and the West pouring military resources and money into the fight, via Ukrainian President Volodymyr Zelenskyy’s government in Kyiv — is suspect.

Of course, the bought-and-paid-for corporate media has not covered anything about the causes of the war, which was mostly triggered by NATO’s incessant desire to continue its eastward expansion, right up to Russia’s doorstep. The same media also has not covered “the rejected Moscow treaty proposals in December, the civil war in Donbass and the 2014 coup in Kiev that led to the Donbass uprising and violent repression by the coup government,” the outlet reported.

The report also noted that the 2014 coup was the starting point that led to a series of events in Ukraine that ultimately culminated with Russia’s Feb. 24 invasion. The following year, for instance, after the Biden regime installed a Western-friendly president, Russian President Vladimir Putin ordered his military to storm into Crimea, which he then proceeded to annex. Not long afterward, he fomented civil war in the Donbas region, where fighting has raged off and on since.

“Removing the video would be consistent with the suppression of any information that falls outside the enforced narrative of events in Ukraine, including whitewashing any mention of the U.S.-backed coup,” Consortium News noted.

Previous :Police in Uvalde contradicted their own mass shooter training: Were they TOLD to stand down while killer rampaged?
Next : Big Tech trying to force Supreme Court into quick favorable decision in censorship case
Receive Our Free Email Newsletter