(Natural News) It’s been a rough couple of weeks for students at Yale Law School, who are responding to news that the Supreme Court may overturn Roe v. Wade with calls to accost their conservative classmates through “unrelenting daily confrontation” and toss the Constitution by the wayside.

Members of the law school’s conservative Federalist Society, first year law student Shyamala Ramakrishna said in an Instagram post, are “conspirators in the Christo-fascist political takeover we all seem to be posting frantically about.” Why, she asked, are they still “coming to our parties” and “laughing in the library” without “unrelenting daily confrontation?” 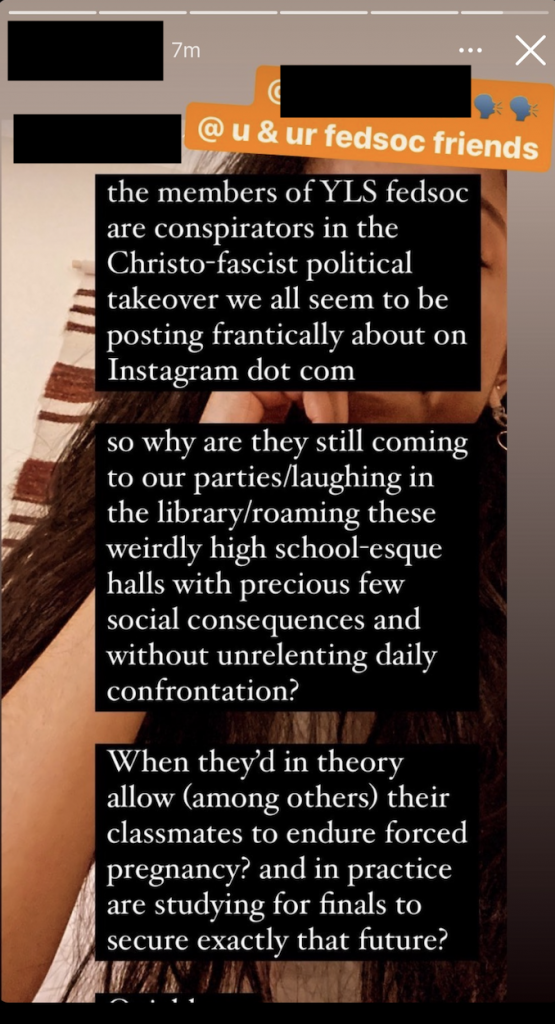 Some of her classmates were less moderate.

“It’s not time for ‘reform,’” first-year law student Leah Fessler, a onetime New York Times freelancer, wrote on Instagram. “Democratic Institutions won’t save us.” It is unclear how Fessler will apply that view as a legal intern this summer for federal judge Lewis Liman. Judge Liman did not respond to a request for comment. 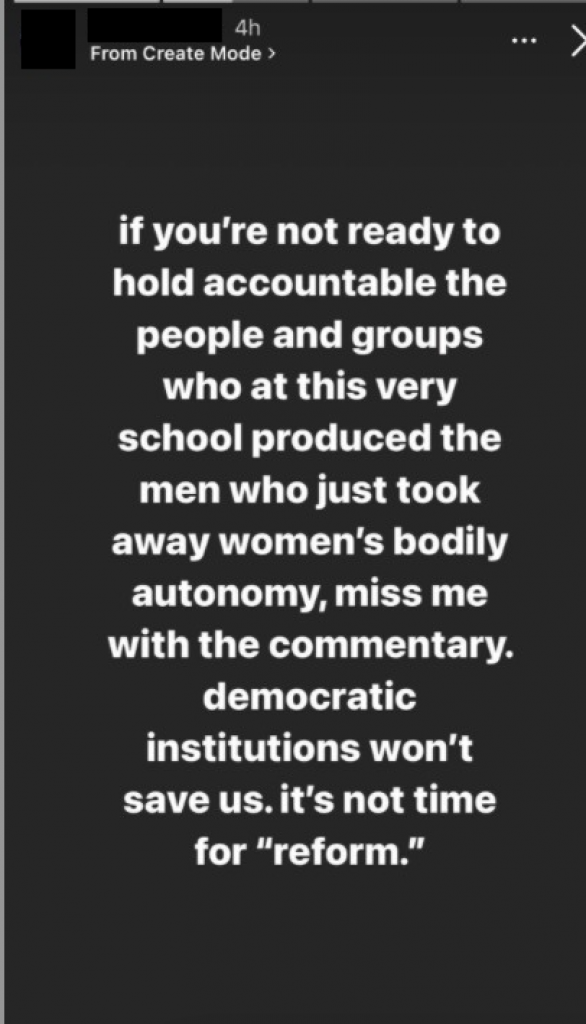 Instagram post by law student Leah Fessler, which she said the Free Beacon is “in no way authorized” to use.

Fessler isn’t alone. “Neither the constitution nor the courts—nor the fucking illusion of ‘democracy’—are going to save us,” first-year student Melisa Olgun posted. “How can we possibly expect a document, drafted by wealthy, white, landowning men, to protect those who face marginalization that is the direct result of the very actions of the founders?” 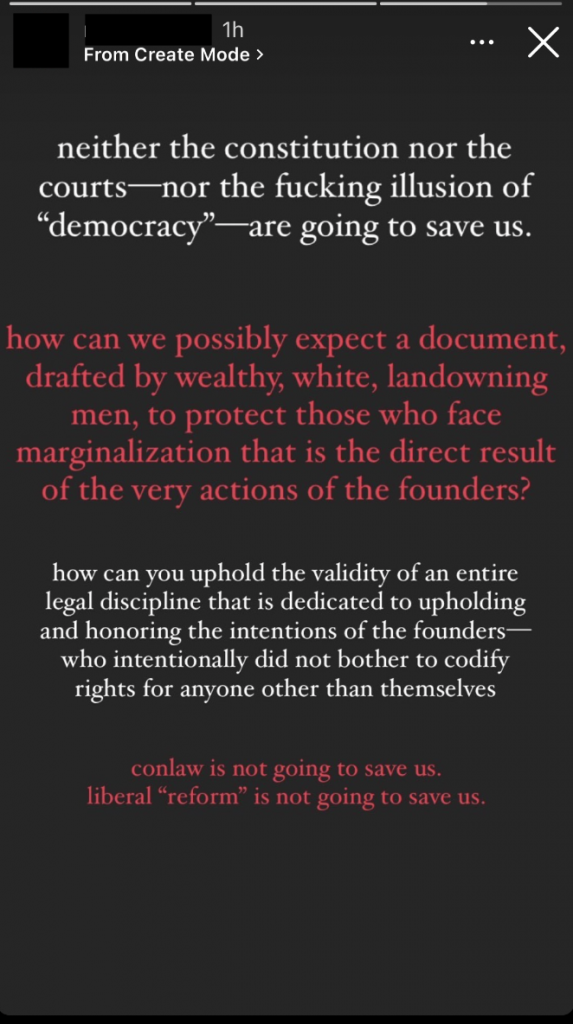 Instagram post by law student Melisa Olgun. Olgun told the Free Beacon, “You are in no way authorized to use it or my name in your story.”

Contacted for comment, the students decried “leaks” of their social media posts and said the Washington Free Beacon was not “authorized” to publish them.

“This was posted PRIVATELY, on a private story, and was clearly leaked to you,” Fessler said in an email, adding that the Free Beacon was “in no way authorized” to use the message.

“The post was on a private account on a private story that was sent to you without my knowledge,” Olgun said. “You are in no way authorized to use it or my name in your story.”

The replies may have been a tacit invocation of copyright laws that ban the dissemination of photos without their owner’s consent. Publishing private Instagram posts, a lawyer might argue, violates intellectual property rights, though Adam Candeub, an intellectual property expert at Michigan State University College of Law, called that argument “bullshit.”

“It’s not clear copyright would even apply,” Candeub said. “I wonder what they’re teaching at Yale Law School.”

Eugene Volokh, a professor of First Amendment law at UCLA School of Law, said the copyright argument was a stretch. Jack Balkin, a First Amendment professor at Yale Law School, did not respond to a request for comment.

The reactions at Yale Law School, long ranked the top school in the country, reflect the radicalism of a younger generation of law students—and, some have speculated, of the leaker himself—who believe that long-standing legal norms perpetuate oppression.

Olgun, for one, lamented that the “‘liberal’ legal discipline will continue to bend over backwards to uphold the decorum, norms, and the sanctity of an institution that serves only those who benefit from originalism.” 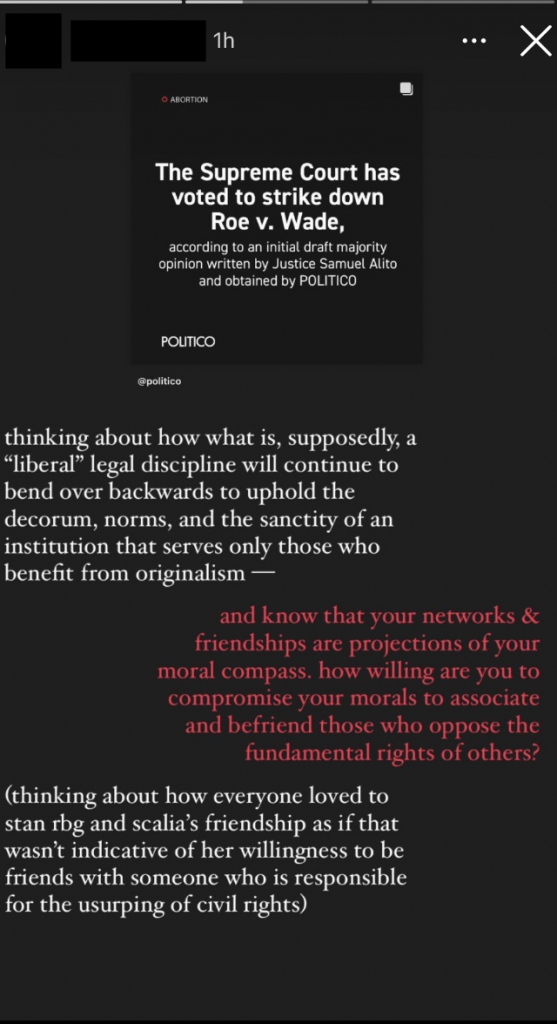 Instagram post by Melisa Olgun, which she said the Free Beacon is “in no way authorized to use.”

Such sentiments are widespread at Yale Law School. In March, nearly two-thirds of the student body signed an open letter condemning the Federalist Society for hosting a bipartisan panel on free speech.

The letter—which Fessler, Olgun, and Ramakrishna signed—also condemned the law school for calling “armed police” on “peaceful student protesters,” who caused so much chaos at the panel that the speakers had to be escorted to a squad car outside.

Similar scenes have unfolded outside the homes of Supreme Court justices in the wake of the leak. Though it is illegal to picket a judge’s home “with the intent of influencing” a case, hundreds of protesters did just that to Chief Justice John Roberts and Justice Brett Kavanaugh, raising concerns about their safety. The Biden Administration does not appear to share those concerns: then-White House press secretary Jen Psaki said Tuesday that “we certainly continue to encourage [peaceful protests] outside of judges’ homes.”

Congress has likewise taken a page from the Yale Law playbook. Days after a pro-life advocacy office was firebombed in Madison, Wis., House Democrats tried to kill a bipartisan bill that would beef up security for Supreme Court justices.

Nearly half those justices are graduates of Yale Law School, which churns out hundreds of law clerks each year. The school has an outsized effect on the legal system, producing a shocking volume of judges, academics, and government officials.

Since 1789, more than 4 percent of all federal judges have graduated from Yale Law. Alumni of the top-ranked school account for 17 percent of new law professors and three of the Federal Trade Commission’s five commissioners, including agency chair Lina Khan.

As the law school’s student body has radicalized, some judges are hoping to hem in its prestige. In March, D.C. Circuit judge Laurence Silberman warned his colleagues against hiring Yale students.

“The latest events at Yale Law School,” Silberman wrote, “prompt me to suggest that students who are identified as those willing to disrupt any such panel discussion should be noted. All federal judges—and all federal judges are presumably committed to free speech—should carefully consider whether any student so identified should be disqualified from potential clerkships.”

Previous :‘Absolutely pathetic’: Military’s wokeness ‘is going to get people killed,’ senator says
Next : As Biden cabal wages war on the 1st amendment, putting corrupt govt in charge of what is ‘truth’ and what are lies ensures tyranny for America
Receive Our Free Email Newsletter