(Natural News) Newly uncovered emails suggest that along with the deep state media and intelligence apparatus, the Defense Department likely also played a role in “Spygate” — the collective operation to subvert the 2016 campaign of the most feared presidential contender in a century: Donald Trump.

Continuing, Cleveland noted that in March, she first reported on an email exchange that was obtained from Georgia Tech that suggested special counsel John Durham is investigating the Democratic National Committee hack that occurred at some point during the 2016 campaign cycle.

“Manos Antonakakis, the Georgia Tech researcher branded ‘Researcher-1’ in the special counsel’s indictment of former Clinton campaign lawyer Michael Sussmann, penned the email shortly after being questioned by one of Durham’s top prosecutors,” she wrote.

Last fall, Durham’s office charged Sussmann with one count of lying to the FBI when he brought forth information allegedly showing a secret communications channel between the Trump campaign via Trump Tower and Russia-based Alfa Bank, which has connections to the Kremlin. In addition, a court filing by Durham’s office noted that two Georgia Tech researchers, now identified as Antonakakis and David Dagon, “were receiving and analyzing Internet data in connection with a pending federal government cybersecurity research contract.”

The then-unidentified government contract originated with DARPA, with DARPA eventually awarding Georgia Tech more than $17 million for the project dubbed “Rhamnousia,” after the mythical Greek goddess of divine retribution, Rhamnous.

After he spoke with Durham’s team, Antonakakis told Georgia Tech’s general counsel as well as members of the university’s administration that he was asked directly by Andrew DeFilippis, Durham’s lead prosecutor:  “Do you believe that DARPA should be instructing you to investigate the origins of a hacker (Guccifer_2.0) that hacked a political entity (DNC)?”

Antonakakis, according to his email, informed DeFilippis that was “a question for DARPA’s director.” Cleveland, per her March report, noted that this represented “a seeming confirmation that DARPA had, as the special counsel’s question presumed, directed Antonakakis to investigate who bore responsibility for the DNC hack, although it is unclear whether Antonakakis’ task concerned solely the supposed identity of ‘Guccifer,’ or more broadly the question of who hacked the DNC.”

A few days later, however, DARPA denied any involvement in attempting to attribute the DNC hack, though an agency spokesman did acknowledge that the agency did meet with Durham’s investigators. The spokesman added that “during the course of that meeting, DARPA did not discuss matters related to the DNC hack, Guccifer 2.0, or leaked DNC emails provided to Wikileaks.”

However, as Cleveland notes in her most recent report, a new email obtained by The Federalist shows that Chris Schneck, who is with the agency’s Information Innovation Office, otherwise known as “I2O,” wrote to Antonakakis on Sept. 25, 2018, with “Mueller case” in the subject line. Much of the email is redacted, of course, but Cleveland notes that the subject line and Schneck writing “great work” in the email actually suggest that the DARPA-funded Georgia Tech researcher was assisting with special counsel Robert Mueller in some way.

“The only apparent pending Mueller case at the time of the email appears to have been that special counsel’s case against the 12 officers of the Russian military intelligence organization known as GRU, who had been indicted two months earlier and charged with crimes related to the hacking of the DNC’s emails in 2016,” Cleveland noted. 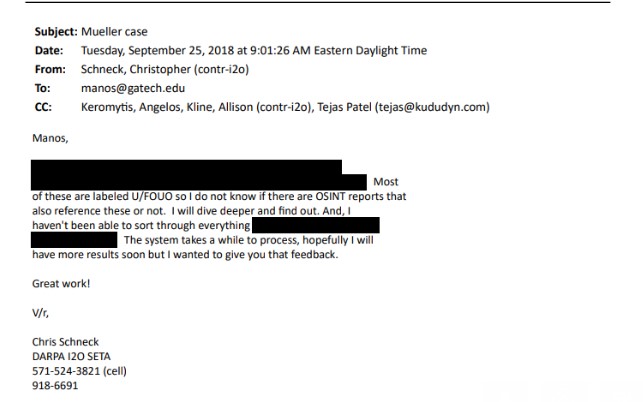 Though the email isn’t clear about any DARPA role in Mueller’s DNC hack probe, Cleveland notes that a “chat log” for the DARPA Rhamnousia project shows both Georgia Tech researchers talking about the hack and GRU:

One text reads: “For FBI to give a heads up to the DNC in fall 2015, this means that the attack was active for many months before.” In another message, one of the researchers jokes that if GRU sends the Russian beauty Annet Mahendru after him, he’s “giving up” his colleagues.

Moreover, another email reviewed by The Federalist reveals that Dagon told Durham’s team that the “entire set” of “Rhannousia chat logs” were “pertinent to” the Special Counsel’s investigation.”

Again, extensive redactions in the chat logs make it impossible to determine for certain if the Georgia Tech researchers were actually involved in assisting the Mueller investigation into the DNC hack.

“But if so, it raises serious questions, the foremost of which is: Why did DARPA claim no DARPA-funded researchers assisted the FBI’s or Special Counsel Robert Mueller’s investigation of the DNC hack?” Cleveland asked.