We now have proof the 2020 election was stolen – The MSM, social media, big tech And Democrats publicly exposed for conspiratorial coverup to install Joe Biden into the White House

(Natural News) We all saw the 2020 election “irregularities,” as well as the continued present day criminal misconduct charges against election officials, all of which we have been told by the MSM for more than a year, didn’t exist, meant nothing, would have changed nothing….etc…

Ok…. putting the 2020 election day antics aside for the moment, there is another manner in which the election was stolen.

he use of a corrupt liberal media, with the manipulation of search results by big tech, along with the blatant and deliberate censoring of critical information in order to protect Joe Biden.

The aforementioned groups colluded to interfere in the 2020 election by willfully preventing the American people from being informed of actual news and insidious corruption by Joe Biden and his son Hunter Biden.

We’ll start with the media. 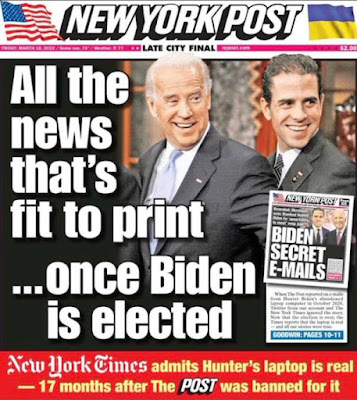 The New York Post cover page shown above, is their victory lap after breaking a blockbuster story 17 months ago, and being censored, banned on social media, users prevented from sharing the story, with the MSM, the Biden campaign, big tech and social media all asserting it was “fake news,” and Russian disinformation.

The problem for the media is while they did accomplish their goal of helping steal a federal presidential election, their lies, their claims and actions, have just been made public in a big way.

Those horrid polling numbers for the media and the lack of trust Americans have in them, are about to get much worse, as more and more are awakening to how they have been duped…..yet again.

It all revolves around a laptop that was obtained that belonged to Hunter Biden, with information, images and activity which would have affected his father’s bid for presidency.

Since this piece is focusing on how the media, social media, and big tech all plotted to cover up a legitimate, game-changing story, in order to help steal and election, we will not be wasting too much time on the information on the laptop, but rather the possible criminality of provable election interference.

17 months after the Hunter Biden laptop story broke, the NYT’s, another outlet that refused to cover the story at the time, and/or pushed the “Russian disinformation” narrative, admitted the original story was true.

Screenshot from the New York Times article, finally reporting on the story, below: 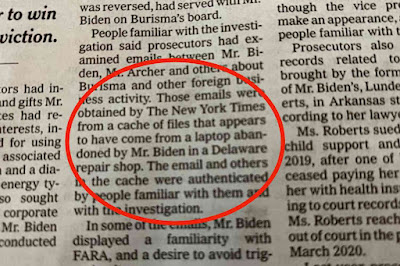 FLASHBACK: Now thanks to Twitter user and writer, Drew Holden, we see a list of egregious denials from when the Post first published their blockbuster report, with screenshots as proof.

NPR insisted it wasn’t a “real” story, therefore they wouldn’t be wasting time on it. 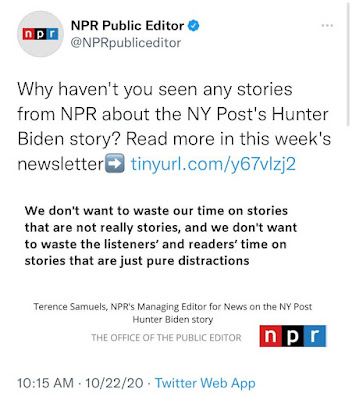 He blamed…….. RUSSIA, for the New York Post story. Big surprise there (Yes that was snark). 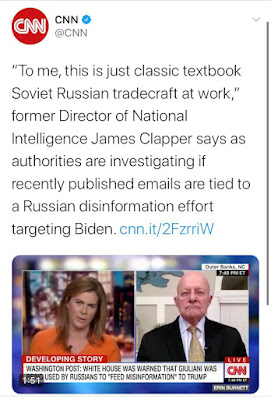 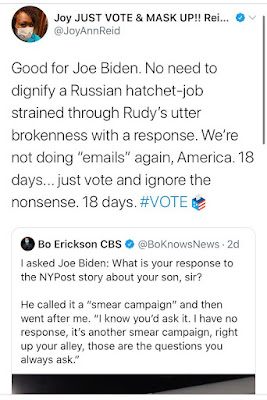 Also, an executive producer for MSNBC, Kyle Griffin, insisted on social media that no one should link or share the New York Post story, saying it “appears to be disinformation.” 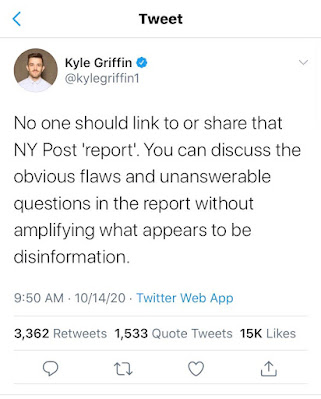 Politico pushed the narrative of former intel officials decry the laptop/email scandal as a Russian disinformation campaign. After all, they claimed, it has all the “classic earmarks” of one. 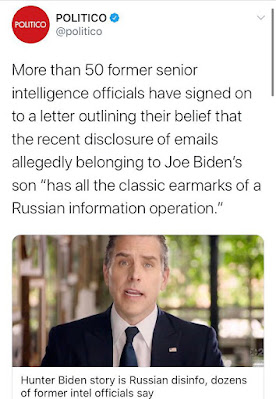 Ben Rhodes, former Deputy National Security Advisor for Strategic Communications and Speechwriting under Barack Obama,  who was left “speechless” after Hillary Clinton’s loss in 2016, posted the following boast about “Republicans” being outraged over the censoring of what the MSM now admits was a true story. 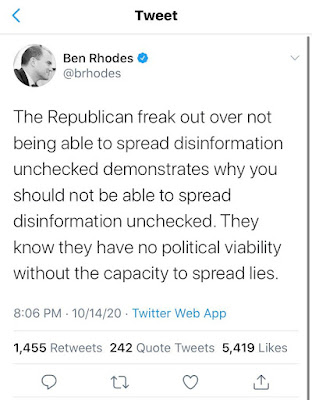 The short video below shows how Rhodes took the Clinton loss on the night of the election.

Before moving along, a quick reminder by Holden on why this story would have been a gamechanger and why the MSM did everything in the power to hide, discredit, or ignore and refuse to let Americans see the truth before the election.

People will try to hand-wave Hunter Biden’s laptop away as just a story about pictures but remember: these emails implicate not just Hunter but also President Biden in a bribery/illegal pay-to-play scheme involving a hostile foreign power.

Holden was not the only one providing receipts on the media malpractice and election interference, as Jon Levine offered more, but his context was the difference in how the media treated the fake ‘pee tape’ versus the very real Hunter/Joe Biden scandal.

I’m just using the NYP story references, but the side-by-side comparisons can all be seen at Twitchy.

Vanity Fair on the New York Post story in October 2020. 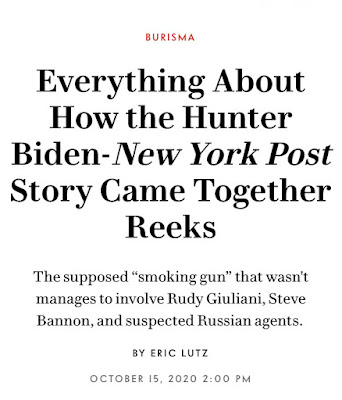 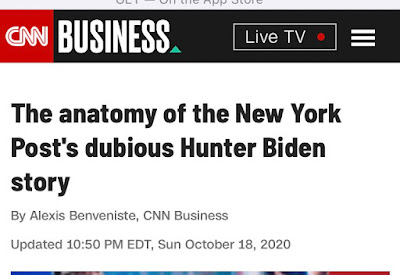 The far left liberal Slate decided to go after the laptop repairman that turned the information over to the New York Post. 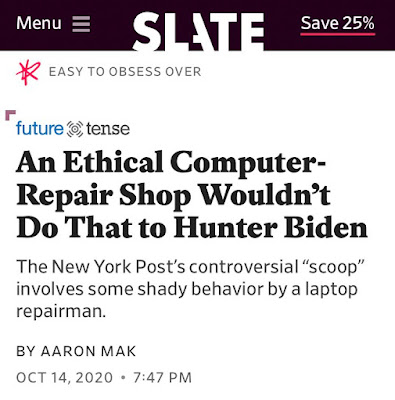 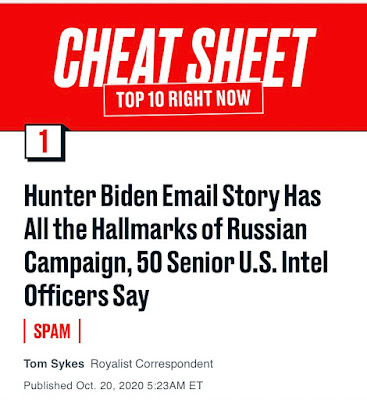 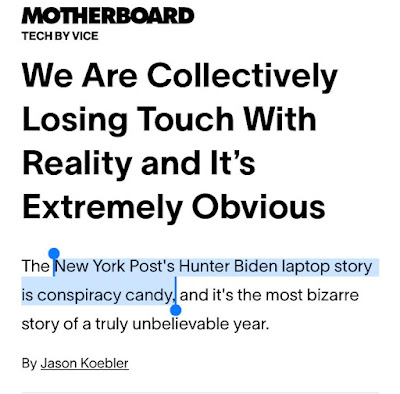 The final offering here is the most ironic because it was the original fake news narrative from the New York Times back then, before admitting 17 months later that they story was true. 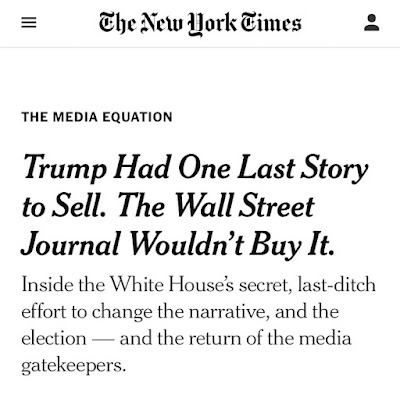 Is it any wonder that the majority of American distrust the media?  Making it worse, we see the pattern from their high trust levels in the 1970s,  consistently lowering, shown below: 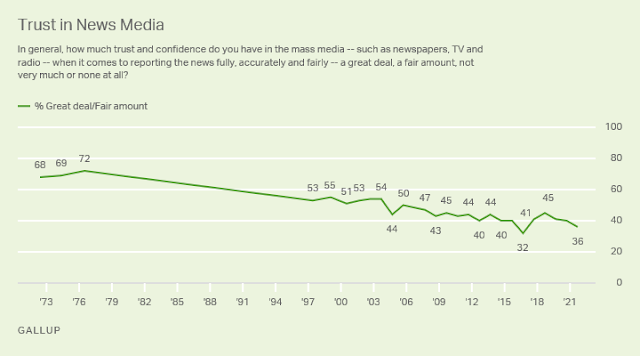 Note– The newer graphs from Gallup start at 1997, which prevents the “big picture” of dwindling trust over the course of the decades. 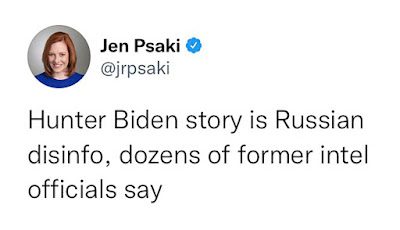 Election interference is a crime, and there is no doubt that the Biden regime won’t do a thing to the media, big tech or social media for interfering in the 2020 presidential election, but it doesn’t change the fact that Donald Trump was and is correct, which should send the TDS crowd into complete meltdowns.

Last but not least, after the New York Post story came out, the Biden campaign was all denials, and now that the New York Times has publicly verified the store….. well, Biden had this to say:

“I bet everybody knows somebody … that in an intimate relationship, what happened was the guy takes a revealing picture of his naked friend, or whatever, in a compromising position and then … blackmails or mortifies that person.”

2000 Mules documentary by Dinesh D’Souza finally reveals PROOF that 2020 election was completely stolen from Trump
We now have proof the 2020 election was stolen – The MSM, social media, big tech And Democrats publicly exposed for conspiratorial coverup to install Joe Biden into the White House
Exclusive: Over 50% of voters in new poll say Big Tech interfered in 2020 election
TREASON: YouTube now DELETING any vids that accurately claim deep state stole the election from President Trump
RACKETEERING: Sidney Powell says that voting contracts made by GOP state leaders in Georgia should be investigated
COLLUSION: Dominion Voting Systems is part of the very same council that disputed concerns about election integrity in a Homeland Security statement
Fraud! Thousands of illegal votes identified by Trump campaign in Nevada as Biden “win” begins to collapse
Political guru Dick Morris says GOP state legislatures can declare Trump winner of stolen election
Biden family’s China ties date back decades to Joe Biden’s term as senator
Bombshell report lays out how the family of Joe Biden has been compromised by the Communist Chinese: Don’t vote for Joe!