“In the course of the special military operation, evidence of the Kiev regime’s hasty measures to conceal any traces of the military biological program finance by the US Department of Defense in Ukraine has been revealed,” he said.

The Russian military official said employees at the labs handed over a copy of a February 24th document from Ukrainian Minister of Health Viktor Liashko instructing them to get rid of the research material.

“To prevent the disclosure of facts of violations by the United States and Ukraine of Article 1 of the Biological Weapons Convention, the Ukrainian Ministry of Health sent instructions to all biological laboratories to urgently eliminate stored stocks of dangerous pathogens,” he explained.

A Twitter account providing copies of the documents along with English translations noted that if the Pentagon was, or is funding biolabs in Ukraine that are working on these dangerous pathogens, it would violate Article 1 of the UN prohibition on biological weapons.

BREAKING: Russia publishes documents which show Ukraine was working on biological weapons near russian borders — such as Anthrax and Plague & that the pentagon has instructed to destroy them — violating article 1 UN prohibition of biological weapons. — These are US funded labs pic.twitter.com/DngZkGwws2

The notice translated into English allegedly instructed employees at labs across Ukraine to “ensure the emergency destruction of biological pathogens” at the facilities.

The Russian defense spokesperson continued, “Obviously, after the launch of the special military operations, Pentagon became afraid that secret biological experiments in Ukraine will be exposed. We will share the results of the analysis of the documents we have received in the near future. Some of them, in particular the Ukrainian health ministry’s instruction to destroy pathogens and certificates of completion from the Kharkov and Poltava biolaboratories we are publishing right now.”

The top Russian military member named the American company Black & Veatch as being involved in the projects.

Always ahead of the curve, a 2015 Infowars article titled, “Why Does Pentagon Need Laboratories In Ukraine?” touched on Black & Veatch’s involvement in the biolabs. 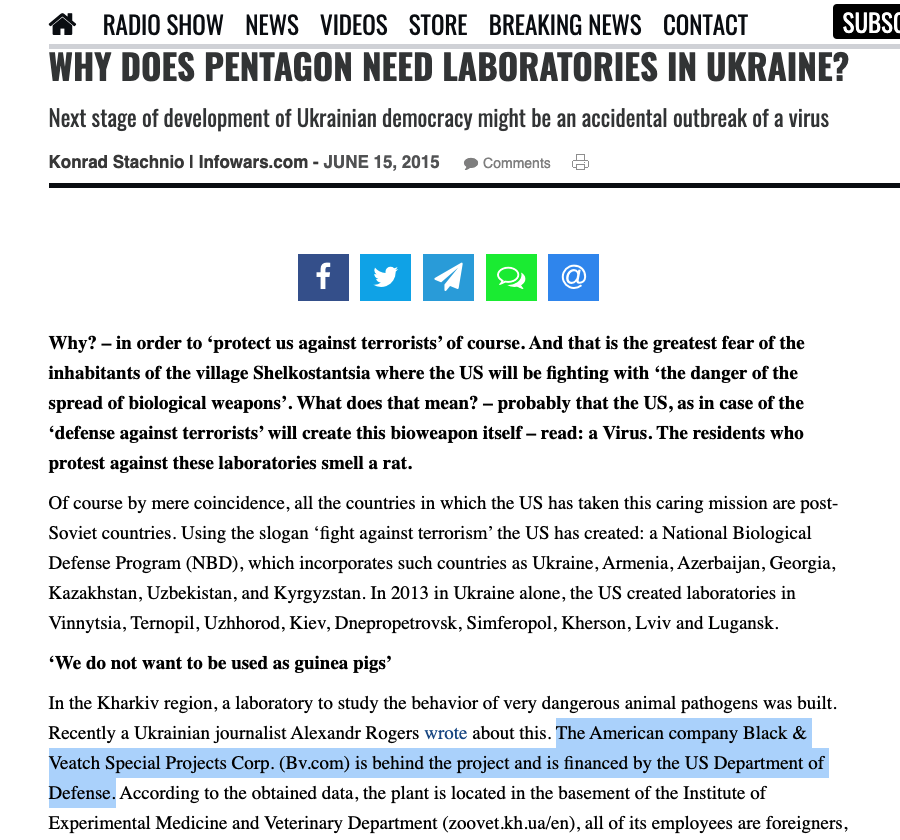 One day after the employees of the Ukrainian biolabs supposedly handed over documents ordering them to destroy evidence, the US Embassy website deleted files documenting the labs’ existence.

However, the papers were saved online prior to being suspiciously removed from the government website.

Continuing his address, Igor Kirillov explained that one aspect of the research supposedly being done at these facilities focuses on creating genetic-specific bioweapons, an accusation Russia has made several times.

Kirillov also claimed everything the Pentagon needs to continue with its military biological program has already been transferred out of Ukraine.

Russian Foreign Minister disclosed on Thursday that he has seen information claiming to prove the US has built at least two new biolabs in Ukraine.

In part two of this report, Infowars will dive into the CIA and Hunter Biden’s connections to the clandestine, U.S.-run Ukrainian biolabs.