The real reasons why Ukraine is so important To Biden, Clinton and their ‘global crime cabal’: Ukraine is their ‘little crime playground’ where their devastating secrets are hidden

(Natural News) If anyone needed to see the ‘bigger picture‘ of everything now happening in Ukraine, Russia, here in America and all across the world, we get it in numerous new stories out recently, and some time ago, across the internet.

Summed up perfectly in this new story over at The Week titled “REMEMBER AFGHANISTAN: U.S. and Britain reportedly believe the Ukraine war could last 10-20 years, become a Russian quagmire”, the ‘military industrial complex‘ we were warned of over 61 years ago by then President Dwight Eisenhower NEEDS new wars to fill the coffers with the 20-year war/occupation of Afghanistan having come to an end.

And while we could never see what’s happening in Ukraine going on for 10 to 20 years with Russia’s unstoppable hypersonic nuclear missiles and the potential of an EMP or two that sends America and Europe back to the dark ages thrown into the mix, we get several HUGE pieces of the puzzle into what is REALLY going on in Ukraine, and why, if we look back at news stories over the past several years.

As we’ll explore within this ANP story, Ukraine is nothing less than the ‘Playground‘ of the ‘global elite crime cabal‘ that ‘runs the world‘, with huge amounts of drugs and human trafficking being run out of the country, along with their ‘world disinfo/control‘ operation, and Ukraine also gives them a ‘front doorstep‘ into Russia, not a word of any of this reported by their ‘controlled‘ mainstream media.

Each of the videos at the bottom of this story take looks at various aspects of that ‘Ukrainian cabal playground‘ that Joe Biden is risking America’s nuclear annihilation over, with the 1st video below featuring US Army Colonel Doug MacGregor joining former US Senator Trey Gowdy on Fox News and telling him and America that the Ukrainian government is deeply corrupt, and Biden and America definitely shouldn’t help them.

Yet it appears another one of the ‘real reasons‘ that Biden will most likely get America involved in the ‘quagmire‘ there is because there are some absolutely devastating ‘Biden family secrets‘ hidden in Ukraine, as well as secrets held by the ‘global crime cabal‘, secrets that Russia could possibly get ahold of if they take Ukraine if they haven’t all been destroyed by then.

And just listen to the desperation and panic in the voices of Hillary Clinton and Nancy Pelosi as heard in these linked twitter videos. What are they hiding? After everything that’s now happening we can surely see that the globalist crime cabal playground runs deep in Ukraine. 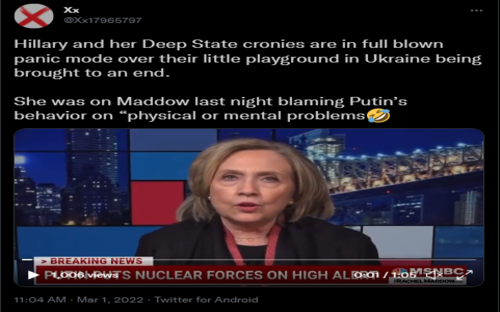 So are you ready to financially support a US ‘war‘ in Ukraine that lasts for 10 to 20 years as this new story over at The Week suggests is a very real possibility? Reporting within it that ‘lawmakers‘ at the US Capitol had been told on Monday that this mess that just recently restarted will likely last 10, 15, or 20 years, although ultimately in their minds, Russia will lose, just think about how much TAXPAYER money a long, drawn-out quagmire would bring in to that military-industrial complex President Eisenhower warned us about 61 years ago!

And while Joe Biden, Democrats, the mainstream media and the ‘globalist cabal‘ attempt to paint Ukraine as a ‘democracy‘ and a ‘free country‘ which ‘freely elected‘ their President Volodymyr Zelenskyy, anybody paying attention to ‘real history‘ remembers that Ukraine’s government consists of very real neo-Nazi’s, many who were ‘installed‘ as ‘puppets‘ by the globalists cabal.

And while this story is certainly no attempt to paint Vladimir Putin as a ‘hero‘, as we hear in the 1st video below, Ukraine is one of the most corrupt, globalist-owned countries in the entire world, quite literally the ‘headquarters‘ of the globalist crime cabal.

One of the only countries in the world that they can fully control that has had the stability and infrastructure to be used for money laundering, bioweapons research and fully controlled by the ‘puppets‘ of the ‘cabal‘ itself, Ukraine in 2022 is also much like America in 2022, a country where nearly all the govt movers and shakers are totally compromised so there’s a big fat ZERO PERCENT chance of anything being investigated.

100% proven by none other than Joe Biden himself as seen in the 3rd video at the bottom of this story when he was talking to the “Council on Foreign Relations” and he quite literally bragged about how he’d hold back a Billion Dollars in aid to Ukraine unless a Ukrainian prosecutor stopped investigating him and his sons dealings, then laughed about it as the crowd joined in, let that sink in for a moment.

Newsom wants to spend $11 billion to give Californians $400 gas cards, throwing more incendiary money into an already inflationary economy
ABORTION WELFARE: Getting an abortion in California is now “free,” thanks to Gavin Newsom
Dr. Scott Atlas laments the damage caused by COVID lockdowns, medical tyrants
Investigation proves Hunter Biden FUNDED the illegal biolabs in Ukraine
Canadian authorities find they are unable to seize Bitcoin donations made to Freedom Convoy protesters
3 Milwaukee officials named as defendants in 2020 election bribery case
Holly Jones tells Tom Renz: Every American can do something for America – Brighteon.TV
New poll shows Republicans sweeping Midterms: 75% of swing-voters think Democrats are “out of touch” and “condescending”… spend too much money
Putin puts Biden’s king in check
Washington is driving the world to nuclear war