Everything changes in an instant when Biden’s war begins: Wars bring famine, mass starvation and rationing, showing why there’s never been a better time to be fully prepared than now

(Natural News) While we like 10’s of millions of Americans have grown angry and weary at the globalists and their ‘wars and rumors of wars‘ that stretch endlessly back in time and seemingly endlessly into our world’s future, a common theme that echoes back to World War I and World War II and long before then is that war goes hand in hand with famine and starvation, along with food rationing, food lines and food shortages, the kind most Americans living today have never seen before.

With history giving us all a reason to be fully prepared, especially with Joe Biden and Democrats pushing America closer every day to a war that we cannot possibly ‘win‘, (especially considering there will be no ‘winners‘ in the world’s first full-blown nuclear war), we’re going to take a look within this story back at history at why there’s never been a more important time for Americans to be fully prepared than now.

Because with reports from July of 2021 reporting there’d been a six-fold increase in people around the world suffering from hunger caused by famine-like conditions, with that report claiming 11 people are likely dying every minute from hunger, now outpacing COVID-19 fatalities, we must remember that all of that mess was unleashed upon America and the world by the globalists to usher in global government tyranny, with food being used as a weapon on more than one level and the huge majority of these shortages caused by the globalists lockdowns.

With reports coming out last September from one globalist think-tank that ‘shortages of everyday products have become the new normal‘ and ‘they won’t end soon‘, the NY Times reported in mid-January that “Supply Chain Woes Could Worsen as China Imposes New Covid Lockdowns“, and that was before all of this talk of a US/Ukraine/Russia/NATO war got kicked up to a fever pitch.

So with History.com reporting food rationing in ‘wartime America‘ has been seen time and again while the National WW2 Museum reports in this entry that rationing and war go hand in hand, as that entry on their website reported: “World War II put a heavy burden on US supplies of basic materials like food, shoes, metal, paper, and rubber. The Army and Navy were growing, as was the nation’s effort to aid its allies overseas. Civilians still needed these materials for consumer goods as well. To meet this surging demand, the federal government took steps to conserve crucial supplies, including establishing a rationing system that impacted virtually every family in the United States.”

Think that Joe Biden and Democrats wouldn’t love to hold that kind of power over the lives of Americans? So while thankfully, we haven’t hit that point in time yet, with Biden and the globalists pushing for war at every turn, and any such war standing a very real chance of crashing down upon ALL of our heads here in America, we’ll be taking a look at getting fully prepared for the kind of interruptions that war could, and has historically, brought. 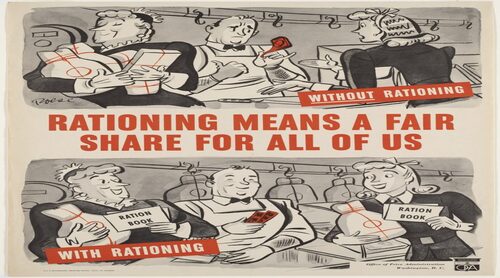 As we see in the photographs above and below, the ‘propaganda‘ rolled out to push food rationing during times of war in the past are very well known and have happened time and again in American history. From this story titled “Make It Do – Meat and Cheese Rationing in World War II“.

Rationing of meat and cheese was an important part of life on the US Home Front. A complex and constantly changing system kept grocery shoppers on their toes.

Why meat and cheese?

The United States produced meat and cheese for her civilians and military, and also for her Allies. During World War I, food shortages were a serious problem, with hoarding, escalating prices, and rushes on stores. When World War II started, the government reduced deliveries to stores and restaurants, instituted price controls, and urged people to voluntarily reduce consumption. Britain had already instituted a point-based rationing system and had found it effective, so the United States decided to implement a similar program in 1943. Rationing made sure everyone got a fair share.

On March 29, 1943, meats and cheeses were added to rationing. Rationed meats included beef, pork, veal, lamb, and tinned meats and fish. Poultry, eggs, fresh milk—and Spam—were not rationed. Cheese rationing started with hard cheeses, since they were more easily shipped overseas. However, on June 2, 1943, rationing was expanded to cream and cottage cheeses, and to canned evaporated and condensed milk.

War Ration Books Two, Three, and Four contained blue stamps for processed foods and red stamps for meat, cheese, and fats. Each person received 64 red stamps each month, providing 28 ounces of meat and 4 ounces of cheese per week. The stamps were printed with a number for point value and a letter to specify the rationing period—such as C8. Rationing calendars in newspapers declared which stamps were current and for how long. To prevent fraud, the stamps had to be torn off in the presence of the grocer. Stamps were good for one, two, five, or eight points, with no “change” given, so the shopper had to be careful to use the exact number of stamps. The system was simplified on February 27, 1944, when plastic tokens were issued as change.

Each cut of meat was assigned a point value per pound, based not on price or quality, but on scarcity. These point values varied throughout the war depending on supply and demand. “Variety meats” such as kidney, liver, brain, and tongue had little use for the military, so their point values were low. On May 3, 1944, thanks to a good supply, all meats except steak and choice cuts of beef were removed from rationing—temporarily.

Plenty of canned meats and cheeses still available now and as quickly as a delivery to your home.

Swanson Chicken á la King Made with White and Dark Meat Chicken, 10.5 Ounce Can (Pack of 12) 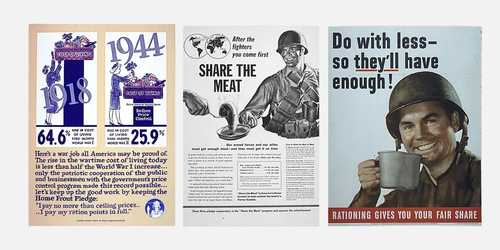 And while NBC News had reported back in 2020 that meat rationing during WWII holds few similarities to the ‘shortages‘ of 2020, it interestingly pointed out an interesting fact as their subtitle: “Our generation is just not used to this kind of hardship. We think that’s slow internet,” said Sarah Sundin, an author who has written about World War II.

And that absolutely spells absolute disaster. As FEMA had determined during several recent surveys, approximately 4.5% in 2018, then 5.2% in 2019, would be considered ‘prepared’.

That means at least 7 million out of the 120 million households in the US are prepared.

If we conservatively assume 1.5 adults per household, that means there are over 10 million individual American preppers. That jives with the 10-20 million number we often estimate.

Before COVID, that means around 5% of US adults were preppers.

Given the growth trends, that should soon be 10% of adults — if it didn’t already happen during the 2020 dumpster fire.

31% of preppers are women, and we believe that number is growing. (Around half of TP’s community identifies as female.)

Preppers are more likely to live outside big cities, but the number near urban areas is larger than previously known (and we think it’s growing).

Yet those numbers also mean that roughly 90% to 95% of people are UNPREPARED. Think of what happens to all of those who are unprepared once war breaks out and food rationing, at the point of a tyrannical gun, is instituted across America. We clearly haven’t seen anything yet.

Previous :HONK: The American Freedom Convoy preparing to land in DC
Next : As Ukraine hands out guns to citizens, the Left finally realizes 2nd Amendment is NOT for hunting
Receive Our Free Email Newsletter

Members of US Coast Guard sue Biden administration over COVID-19 vaccine mandate
If Biden were a Republican, the outcry over his failure to deal with monkeypox would be headline news
Democrats to give the IRS $80 billion to harass hardworking Americans with more audits and increased scrutiny
Russia has “super weapons” that it can use against America
China suspends dialogue with US following House Speaker Nancy Pelosi’s Taiwan visit
Houston officials ban “ghost guns” from anti-Second Amendment buyback event after man discovers infinite money glitch
I’m Fired Up: Chad Caton blasts Rep. Jerry Nadler, ATF over attempts to violate Second Amendment – Brighteon.TV
Americans divvying up the United States as the mass exodus from liberal states continues – time to stop trying to ‘unite’ with baby-killing, soft on crime liberals
New media are as intertwined with imperial power as old media
The big green lie almost everyone claims to believe