(Natural News) The husband of CNN Correspondent Paula Reid formerly worked for a lobbying group representing Chinese Communist Party-linked companies before joining a financial advisory firm training companies on how to work with the brutal regime, The National Pulse can reveal.

Reid – who joined CNN as its Senior Legal Affairs Correspondent after working as a CBS News White House Correspondent – has frequently used her platform to spread the debunked narrative that Donald Trump colluded with Russia. Reid drew the ire of the former president during press briefings for abrasive and often flawed questions about his administration’s COVID-19 response.

Most recently, Reid was tasked by the disgraced former CNN President Jeff Zucker with falsifying reports about Congressman Matt Gaetz.

And despite Reid constantly peddling the “Russia Collusion” hoax, her husband, Jason Kolsevich, formerly worked as an analyst for the American Chamber of Commerce in China, according to his professional bio.

The Chamber, known as “AmCham China,” functions as a pro-Chinese Communist Party lobbying group, whose leadership is comprised of American companies keen on securing market access and outsourcing American jobs to the country.

AmCham liaises between the Chinese Communist Party and its American members to bolster ties:

“As a primary pillar in our pursuit of improving the business environment and helping American companies succeed in China, AmCham China’s advocacy efforts address a wide scope of industry needs and extend from the central government to the local municipality levels. AmCham China advocates on behalf of our members’ evolving needs in the ever-changing China business landscape through a host of central and subnational government engagement efforts, large events such as the Annual Appreciation Dinner, and ongoing policy analysis and recommendations.”

The group’s close ties to the Chinese Communist Party have frequently prompted its leadership to defend Chinese companies under scrutiny for ties to Beijing or the regime’s military.

The National Pulse can also reveal Kolsevich’s’ inclusion in AmCham China’s “China Brief” magazine from December 2011. The magazine lists the CNN Correspondent’s husband as either starting or renewing a “Young Professional Membership”: 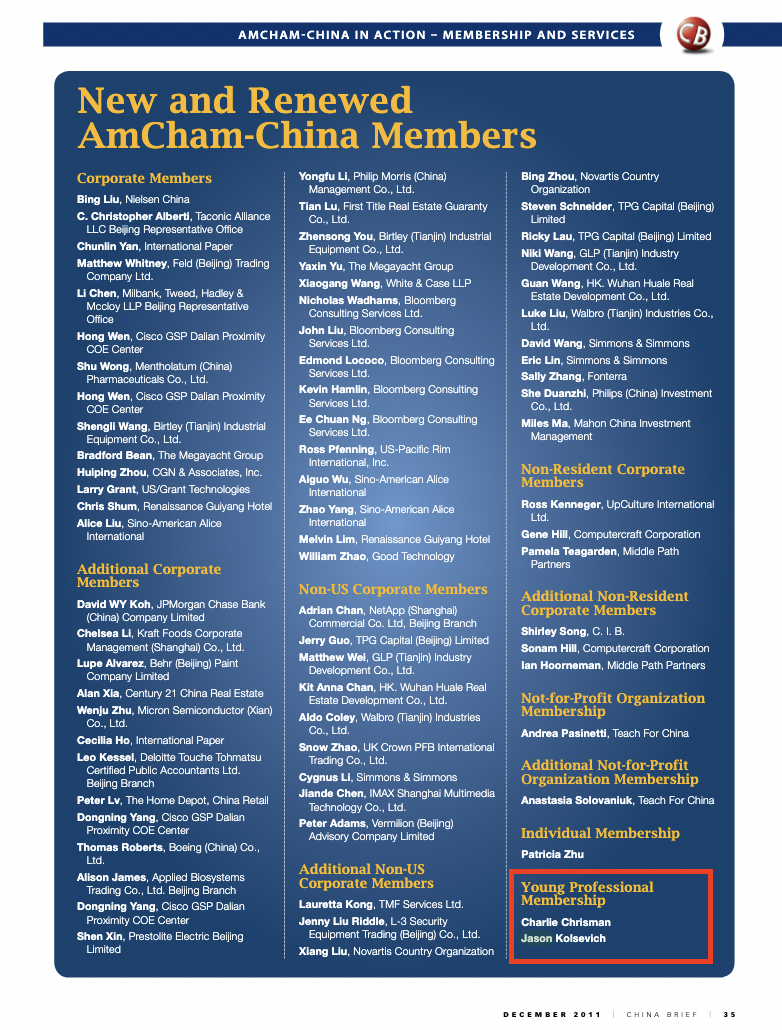 The Beijing-based university, headed by a former Chinese Communist Party spy agency leader, has seen its American graduates questioned by the Federal Bureau of Investigation (FBI) over fears of students being “co-opted by Chinese espionage efforts.”

The CNN correspondent’s husband now works as a Director at Water Street Partners, a joint venture advisory firm based in Washington, D.C. “He is responsible for serving a global client base of TMT, financial services, consumer, industrial, and energy companies – and focuses on business strategy, transaction structuring, and Board governance engagements,” explains his profile on the firm’s website.

The firm appears to engage with Chinese companies, publishing articles including “Three Steps To Negotiate Joint Ventures In China” in June 2016.

“The negotiating approach needs to be tailored to the individuals across the table representing the counterparty. In China, these individuals may represent the government, a state-owned enterprise, or private business,” instructs the firm. “They may be highly Westernized, or not. Their level of seniority and decision power may not be apparent. But all these aspects are crucial in tailoring the pitch and negotiation tactics.”

The article also includes a graphic detailing how to prepare for negotiations, including questions such as “what other important connections do they have (e.g. Chinese Communist Party)?” and “where do they work (e.g. state-owned enterprise versus private company)?”

A separate article on “confronting national differences in board culture” also discusses partnering with the Chinese Communist Party.

“Some cross-border joint ventures, especially in places like China, Africa, the Middle East, and other major natural resource-holding emerging markets, government officials may be Board members through a state-owned partner. In China, the government will often appoint a “party observer” to the Board,” explains the firm.

Previous :The naked face of new normal fascism
Next : Perhaps the US should shut the f**k up about respecting other countries’ sovereignty
Receive Our Free Email Newsletter