According to Canada-based Rebel News:

Twenty “masked and violent attackers” armed with axes and flare guns raided an oil drill site near Houston, British Columbia in the early hours of Thursday.

“On Thursday, February 17, 2022, shortly after midnight, Houston RCMP was called to the Marten Forest Service Road (FSR) after Coastal Gas Link (CGL) security reported acts of violence at their work site,” the RCMP reported in an official statement.

“It was reported approximately 20 people, some armed with axes, were attacking security guards and smashing their vehicle windows. It was initially reported that some CGL employees were trapped, but all had managed to safely leave the area,” the RCMP added.

“Upon police attendance at the 41 km mark, the roadway had been blocked with downed trees, tar covered stumps, wire, boards with spikes in them, and fires had been lit throughout the debris. As police worked their way through the debris and traps, several people threw smoke bombs and fire lit sticks at the police, injuring one officer,” the statement continued.

Quite obviously this was a planned attack — and a legitimate act of domestic terrorism, given that the attack was launched against a vital infrastructure, oil production.

A statement by Coastal GasLink said the attackers wore masks and camouflage and moved to surround and then attack oil workers in what the company described as a “highly planned and dangerous unprovoked assault.”

Rebel News added that the Morice River drill site off of the Marten Forest Service Road is where a former blockade and opposition camp sprang up in 2021 lasting 59 days.

“In one of the most concerning acts, an attempt was made to set a vehicle on fire while workers were inside,” the company’s statement noted. “The attackers also wielded axes, swinging them at vehicles and through a truck’s window.

“Flare guns were also fired at workers. Workers fled the site for their own safety and remain shaken by this violent incident. Fortunately, there were no physical injuries to Coastal GasLink workers,” the statement added. 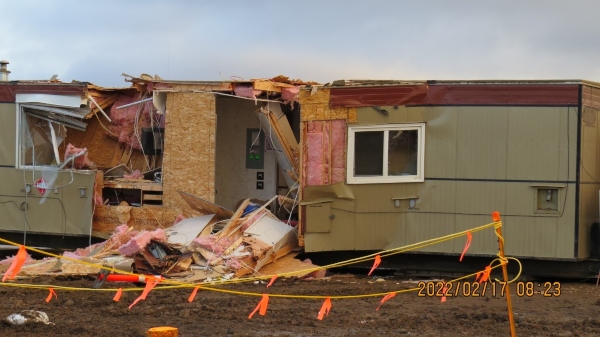 It’s a miracle no one was killed, much less seriously injured.

Ezra Levant, founder of Rebel News, tweeted about the hypocrisy of Trudeau going after Canadian truckers with full force versus taking on legitimate domestic terrorism: “Foreign-funded left-wing eco-terrorist just committed more violence in one day than 100,000 truckers have done in three weeks. But they’re Gerald Butts’s people, so they get special permission for violence. It’s the peaceful truckers who must be crushed.”

Foreign-funded left-wing eco-terrorist just committed more violence in one day than 100,000 truckers have done in three weeks. But they’re Gerald Butts’s people, so they get special permission for violence. It’s the peaceful truckers who must be crushed. https://t.co/FhWncRH4vZ

Let’s see if the Emergencies Act is brought into effect here. Extensive evidence exists of foreign funding to equip and arm these attackers, using the same crowdfunding tools that Ottawa truck rallies employed.

Coastal GasLink added that the terrorists used grinders to sever locks on gates securing the construction site and proceeded to vandalize heavy equipment and trailers, causing millions in damage to equipment and property.

“Equipment hydraulic and fuel lines were also cut, causing dangerous leaks,” the company stated. “Damage and environmental impacts are still being assessed. We are working to contain and clean up the environmental damage caused by the attackers. We also understand the attackers felled trees, placed tire spikes and lit fires on roads in an effort to impede access to the remote worksite.”

Now that a real act of domestic terrorism has occurred, what is Trudeau really prepared to do to ‘protect’ Canada?