(Natural News) The Los Angeles County Board of Supervisors are currently on a witch hunt to terminate all non-compliant, unvaccinated city workers who have NOT fallen prey to medical fraud and vaccine damage. LA County is currently sending “letters of suspension” to brave firefighters who serve the city. These letters explicitly state that the suspension will last five days and will be enforced at FUTURE dates.

Apparently, the county DOES NOT have enough able-bodied workers who are fully vaccinated. LA County cannot afford to suspend the unvaccinated at this time because there are not enough “fully vaccinated” workers left to fill their shoes. The vaccinated are either sick, bed-ridden, still masked up and too afraid to be around people, or dead from the vaccines. In a way, this letter is a vindication for public servants who have been unlawfully threatened with termination and certain death for over a year.

LA to suspend unvaccinated firefighters at LATER dates, because vaccinated are too sick, scared (or dead) to show up to work

The dutifully compliant LA Fire Chief, Daryl L. Osby, sent out these “Notices of Suspension” to discriminate against certain firefighters on his team. These healthy, able-bodied firefighters have spent the past year standing up for their body autonomy rights and for the medical freedom of all. They have defied historic vaccine violence and stood up to an authoritarian pharmaceutical dictatorship that now occupies and controls the LA government. These brave firefighters have had to mentally deflect a constant propaganda campaign. They are still alive and well, untainted by this vaccine bioweapon experiment. They continue to take the punches, while moving forward with their lives. They should be honored, not discriminated.

The letter threatens unvaccinated fire fighters who are still healthy and showing up to serve their city. “This is to notify you that the Los Angeles County Fire Department is imposing a five (5) day suspension from your permanent position of Fire Fighter due to your failure to comply with the Department of Human Resources (DHR) Policies, Procedures, and Guidelines,” the letter states.

However, the letter continues, “Because of the Department’s current staffing crisis, resulting from the current COVID-19 surge, your five (5) day suspension without pay will be served at a future date.” Technically, this means that these firefighters could go get a few vaccines over the coming months and STILL be suspended at a later date (if they survive the blood clots, severe disease, and/or cardiac arrest that may follow covid-19 vaccination).

The letter continues, “The delay in the serving of your suspension is necessary to avoid disruption to the vital emergency services to the residents and communities that we serve. You will be notified in the future as to when you will serve the five (5) day suspension in writing, but please note that this suspension is considered imposed for progressive discipline purposes.” LA county has decided to space out suspensions and strategically carry out their discriminatory acts against the unvaccinated — a moral and ethical issue that will need to be addressed.

After using vaccine violence against innocent public servants, the County of Los Angles Fire Department also hypocritically uses the tagline, “Proud Protectors of Life, Property, and the Environment” on their letters of suspension. How can the department protect anyone’s life or property if the people they’ve forced to vaccinate are too sick (or dead) to show up to work? How can any organization vow to defend life and property if they threaten (in writing and with discriminatory policies) the personal property rights and body autonomy of individuals? 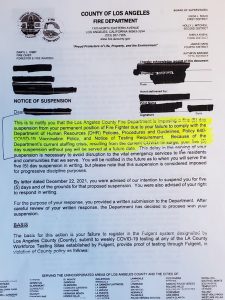 “The Science” is collapsing in New Zealand as covid-19 mandates are rolled back
After destroying American society, the CDC admits natural immunity works better than COVID jabs
PHARMA RACE WARS: While Pfizer places all races at risk with their COVID vaccines, WHITES and ASIANS are NOT allowed to apply for Pfizer’s fellowship grant program
Young Colorado man reluctantly took covid jab to travel and had to undergo emergency surgery, after multiple blood clots formed in his leg
Nolte: 11 ways Democrats helped overturn Roe v. Wade
Globalists want to track your “individual carbon footprint” for total control over your travel, food and consumption of goods
California to become the first “abortion tourism” state, luring pregnant women to the state with funds for airfare, lodging, meals
KILLING THE YOUNG: Millennials, Gen X and Gen Z experience record 84% excess mortality in fall of 2021, after vaccine mandates were rolled out
SAVE A GENERATION tour kicks off in FLORIDA April 21-30 … health freedom has never been more important
World Government Summit: A centralized, digital currency is coming, and there will be no individual privacy or autonomy