Chickens keep coming home to roost as 5 more young doctors die unexpectedly, including another one in a private plane crash

(Natural News) Big pharma flunkies in white coats are the most vital assets to the entire COVID-19 and “vaccine” agenda. This group shepherds the masses of lambs to their slaughters in exchange for monetary compensation.  Doctors and other healthcare professionals not only have front-row seats to the millions of post-injection deaths and maiming, but also have greater access to medical journals and scientific studies than everyone else. Yet for some reason, if you believe the statistics, 96% of U.S. doctors have received the lethal injections. And it’s believable based on the real-life, real-time results.

It could legitimately be argued that some of these high-paid professionals are in fact committing suicide by receiving the injections. We’ve covered at least 15 stories of young doctors dying “suddenly and unexpectedly” in the last six months alone. Now we can add five more to the mix. 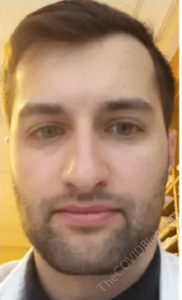 Dr. Stephen E. Codella was only 31 years old when he “passed away peacefully in his home” on January 27, according to his obituary. He earned his Doctorate of Medicine in 2016 from Kimmel Medical College at Thomas Jefferson University. Dr. Codella completed his residency in Internal Medicine at Temple University Hospital. He was an Attending Physician already when he was accepted into the Temple Pulmonary and Critical Care fellowship. Dr. Codella would have completed the program in 2023.

He was a musician who played guitar, bass, drums, saxophone and was a singer/songwriter. Dr. Codella was also a black belt in karate. All Temple University staff, students, faculty and healthcare workers were required to be “fully-vaccinated” by October 15, 2021. Dr. Codella is survived by his mother and father, who were also doctors, and his sister. 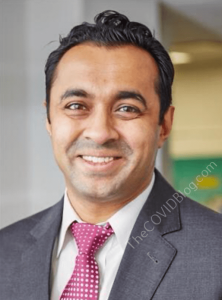 Dr. Neil S. Patel was a vitreoretinal and anterior segment surgeon (eye doctor). He was born in Quebec, but lived in New York City since 1996. Dr. Patel received both his bachelor’s and master’s degrees from Columbia University before earning his medical degree from SUNY Downstate Medical Center in Brooklyn. He founded New York Ophthalmology in 2014. Newsweek magazine recognized Dr. Patel on its America’s Best Eye Doctors list for 2021.

Dr. Patel, 45, passed away on January 6, 2022. He is survived by both parents and his sister. Of course you can’t even eat at a restaurant or go to a movie in New York City without showing proof of receiving gene therapy injections. The statewide booster mandate for all New York healthcare workers goes into effect on February 21. 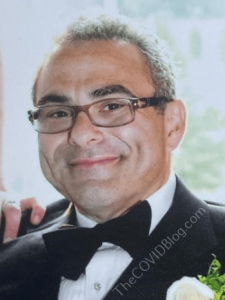 Dr. Benigno Federici “died unexpectedly” on January 24, according to his obituary. He was 57. Dr. Federici was an OB-GYN at Sentara Obici Hospital in Suffolk. He was also faculty at Liberty University College of Osteopathic Medicine. 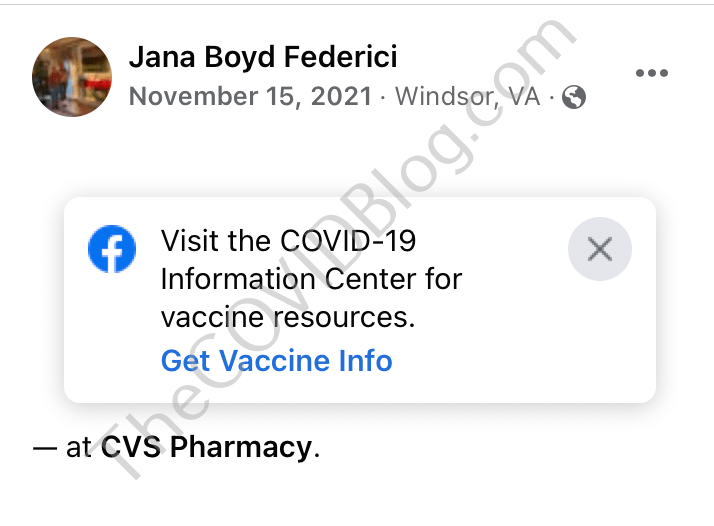 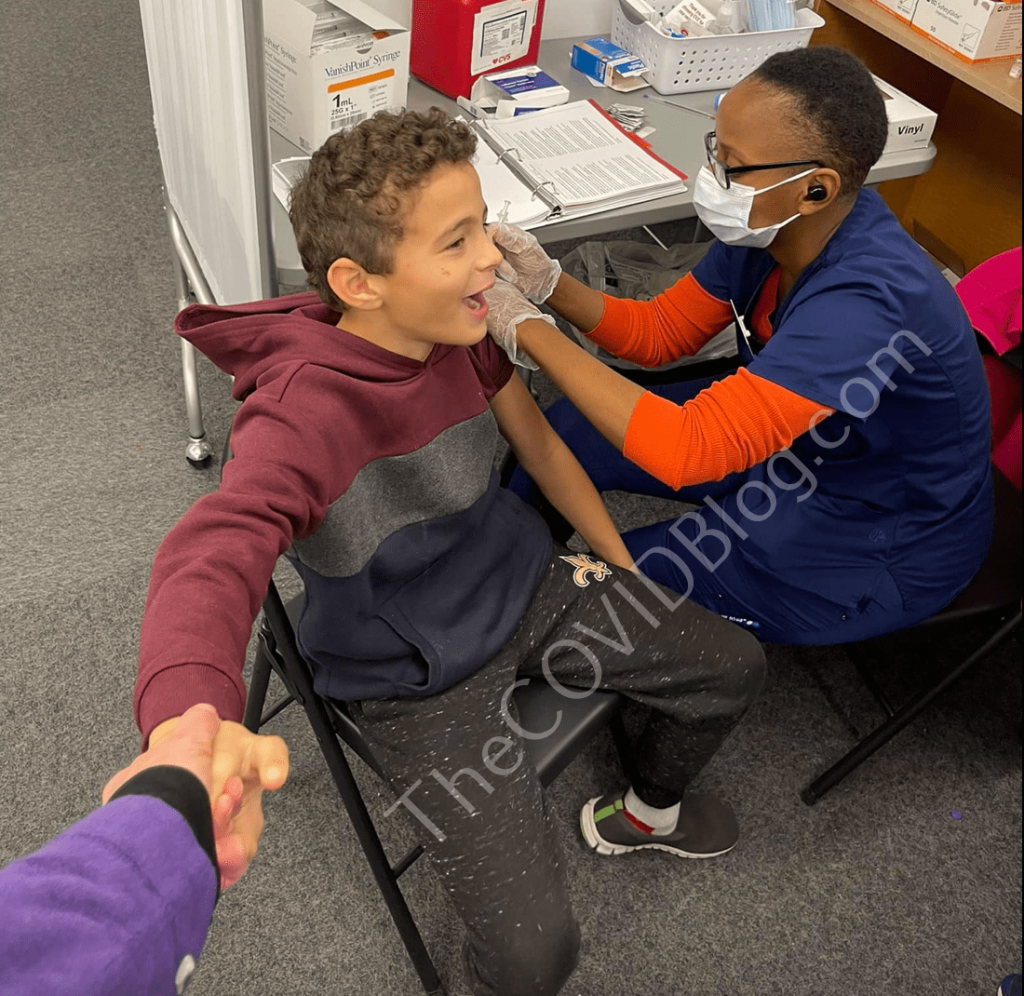 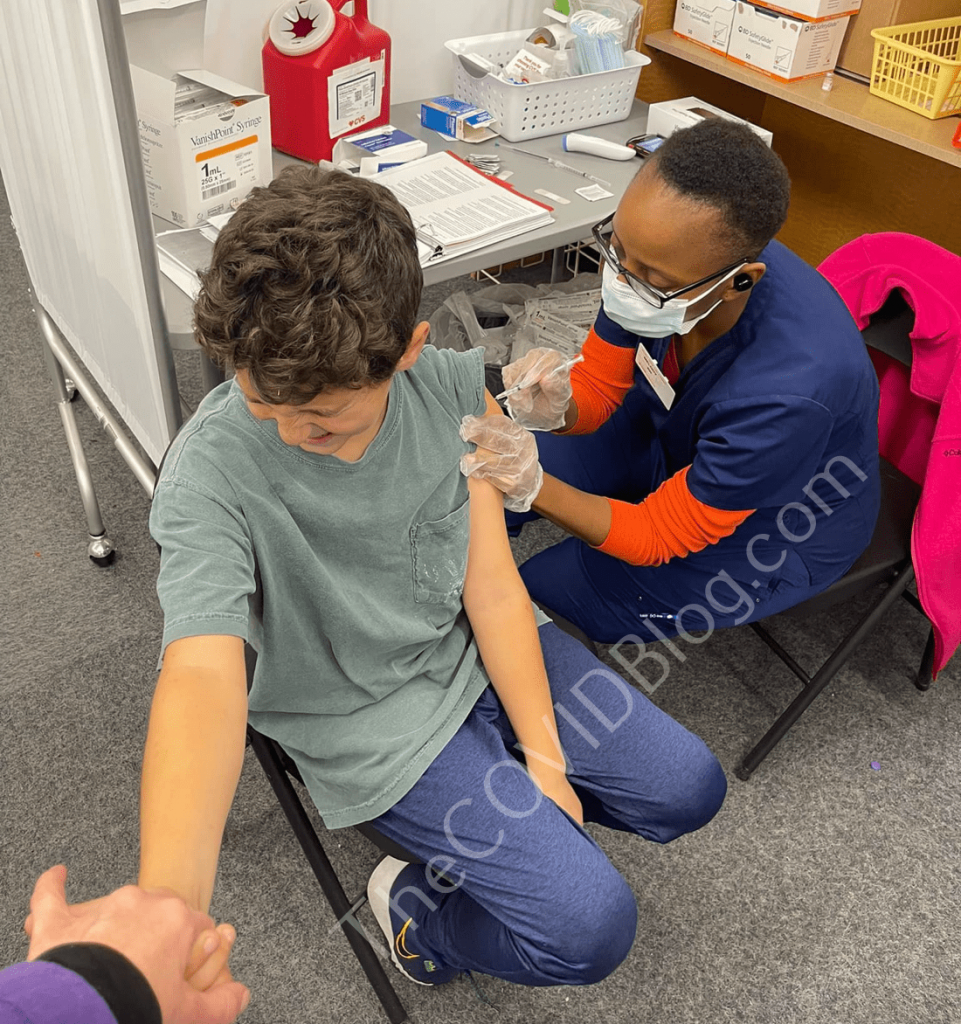 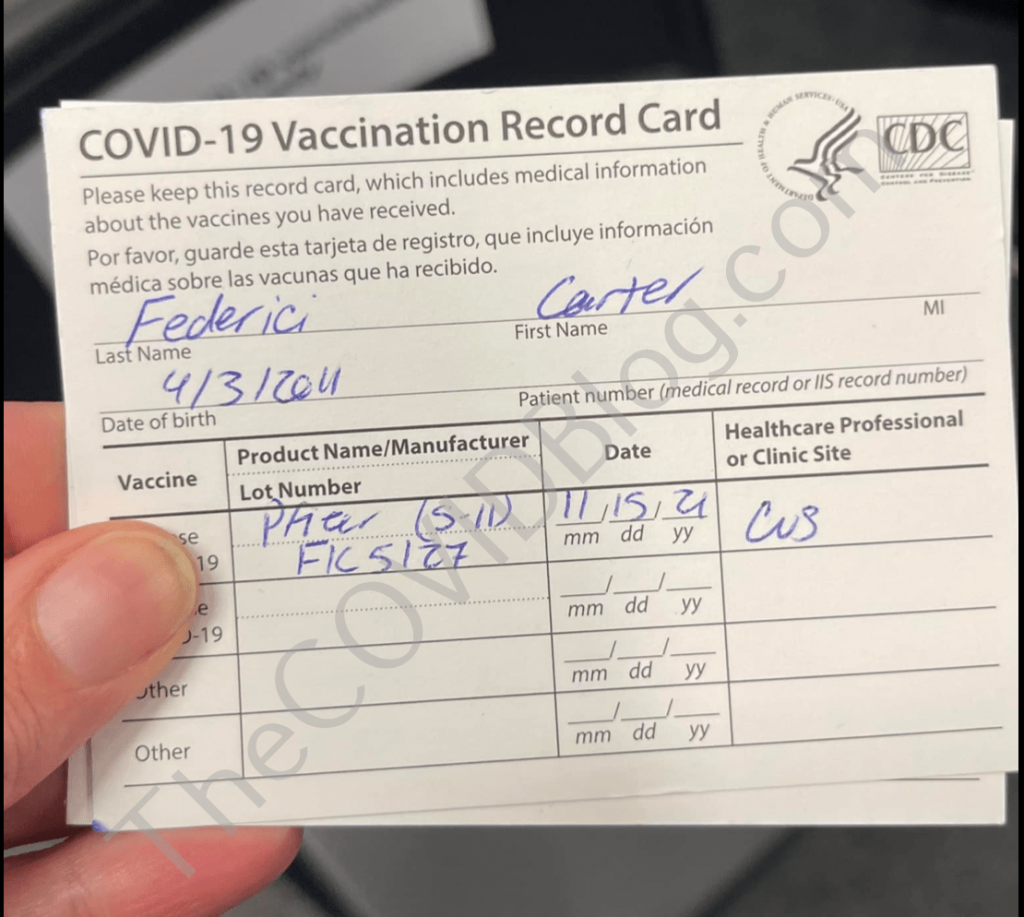 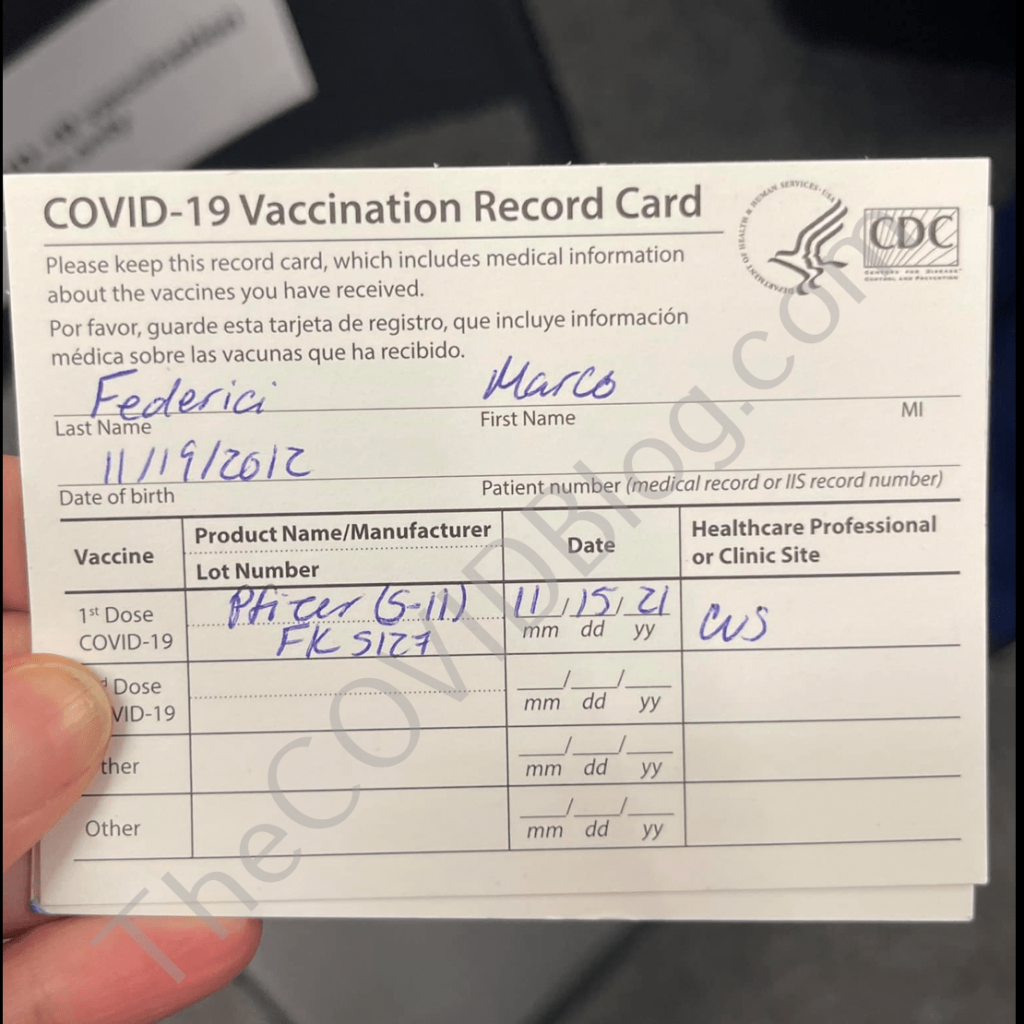 Batch #FK5127, which the boys received, has at least 250 adverse reactions associated with it, according to the How Bad is My Batch website. 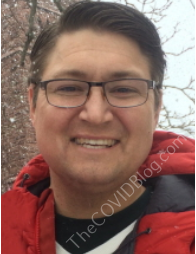 Dr. Matthew John Gnacinski passed away on January 21 at St. Vincent Hospital in Erie, according to his obituary. He died “due to complications from COVID-19.” Of course we all know what that really means. Dr. Gnacinski had several preexisting conditions, including granulomatosis with polyangiitis which led to two kidney transplants, heart valve replacement surgery, and dialysis for eight years. In other words, there’s no way he should have ever received the shots, for his own good.

Dr. Gnacinski was a pharmacist at CVS. The company required all pharmacist to be fully-vaccinated by October 31, 2021. 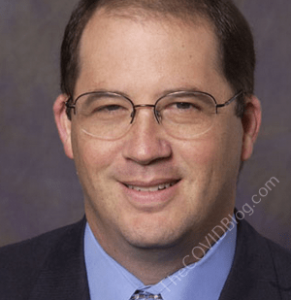 Dr. Richard Jolkovsky was a cardiologist at CentraCare Heart and Vascular Center in St. Cloud, Minnesota. He was also on the hospital’s board of directors. CentraCare required all employees to be fully-vaccinated by December 15.

The 61-year-old doctor, like many of his colleagues, had a lot of disposable income. That’s why many doctors own private airplanes and get pilot licenses. Dr. Jolkovsky received his private pilot certificate on February 4, 2021, according to Federal Aviation Administration (FAA) records. 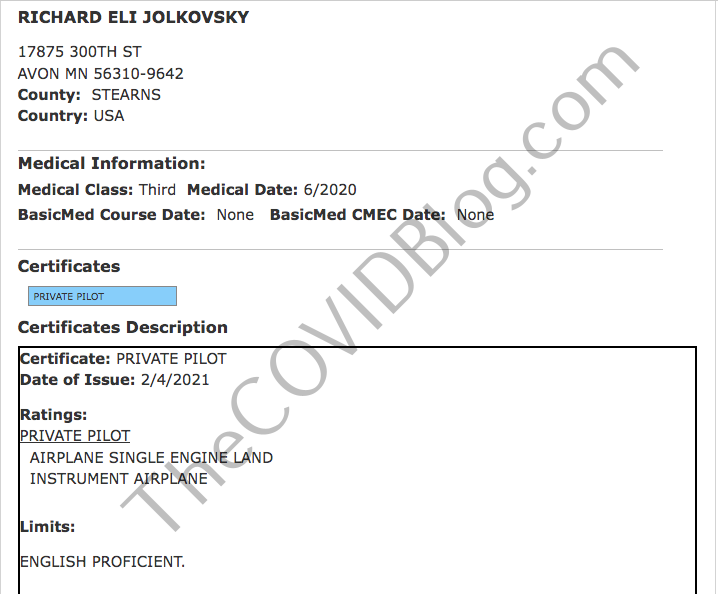 Dr. Jolkovsky and a passenger, Mr. Kyle Fiebelkorn, took off in the doctor’s Cirrus SR22 single-engine plane from Flying Cloud Airport in Eden Prairie, Minnesota on Monday, January 31, around 12:30 p.m, according to Fox 21 Duluth. 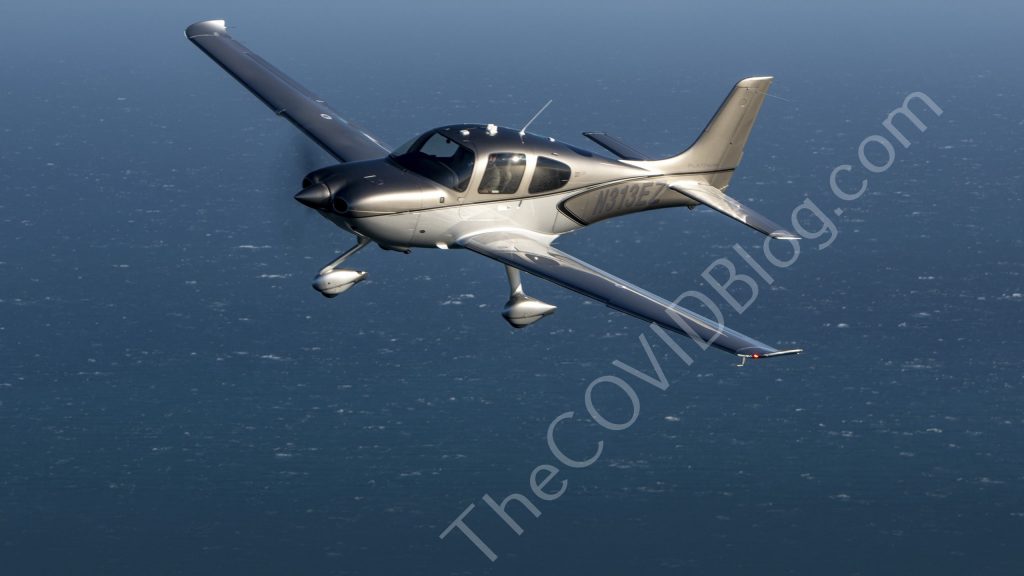 Things get really dramatic at the 2:03 mark, with the plane’s nose bouncing up and down. The plane quickly lost altitude and crashed seconds later. Despite crashing, there was no explosion, and the plane was almost completely intact. Perhaps the snow softened the crash “landing.”

The plane went down just south of the town of Hutchinson, Minnesota, near 145th Street and Plum Avenue.

Both men were airlifted to a Minneapolis hospital. Dr. Jolkovsky died two days later, February 2, according to his son, Ben. 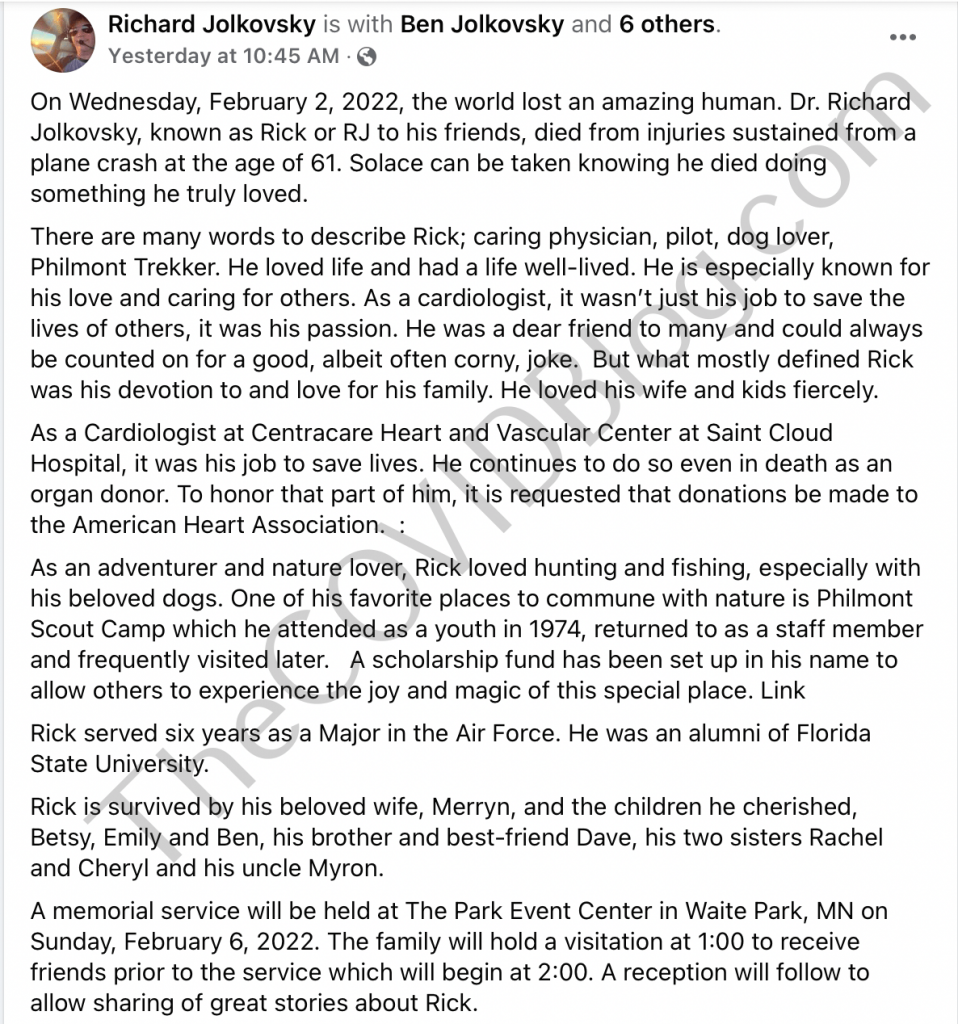 Mr. Fiebelkorn is in stable condition. It stands to reason, based on the evidence herein, that Dr. Jolkovsky should also be in stable or better condition, unless all that strange turbulence in the simulation was the pilot having a heart attack or stroke.

The Star Tribune in Minneapolis implied that this was Dr. Jolkovsky’s second flight in the plane. The foregoing Facebook send-off message says Dr. Jolkovsky was an Air Force Major for six years. But a November 7, 2021 Facebook selfie of Dr. Jolkovsky flying a plane says he’s only been flying for four years. 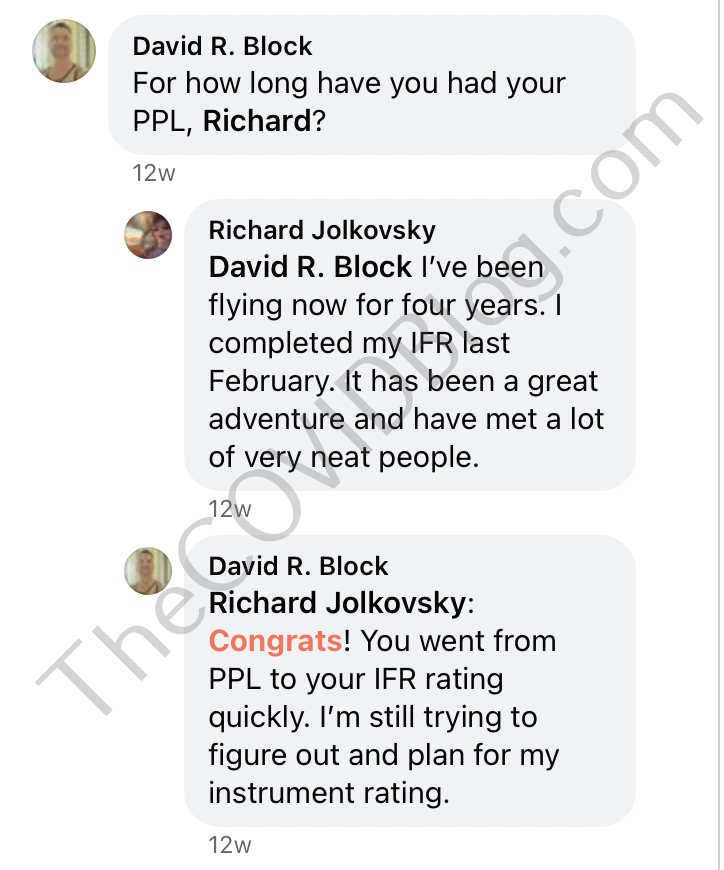 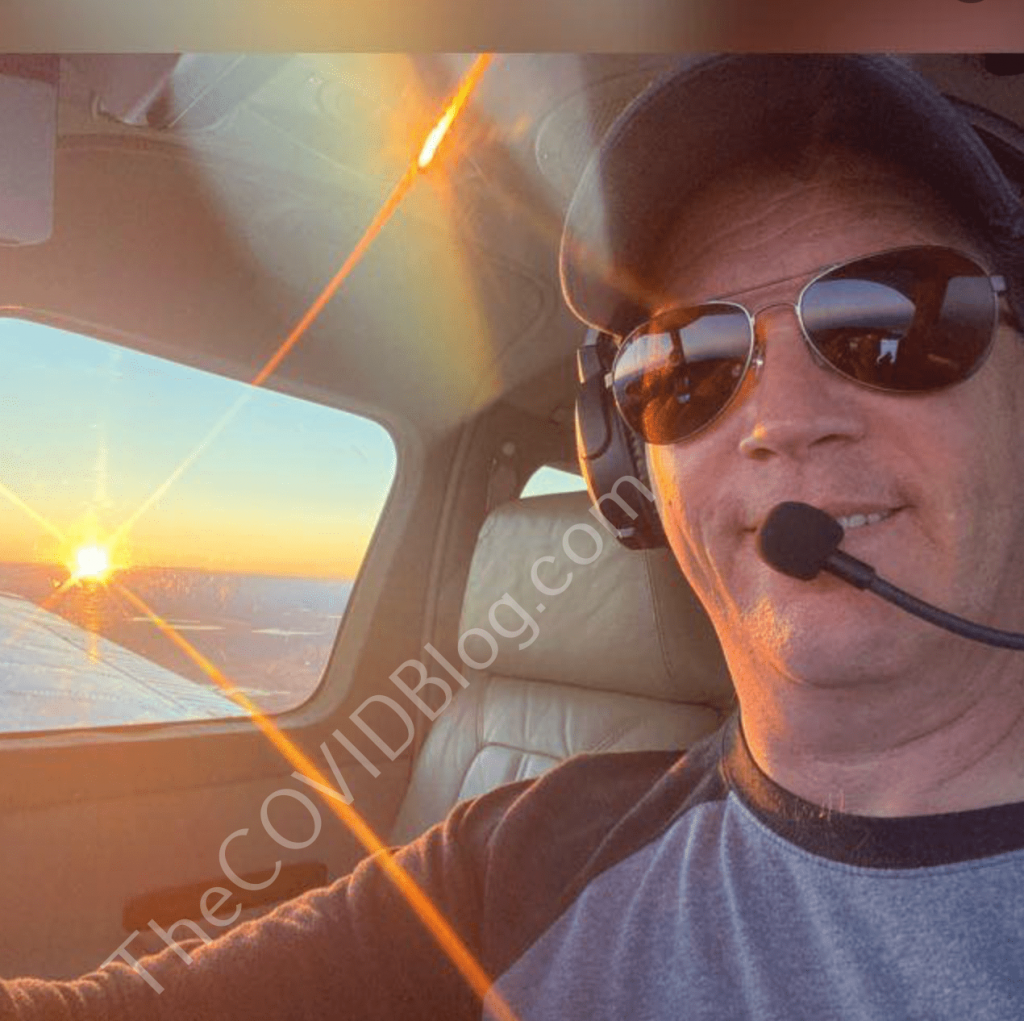 There are no further updates on the crash as of publishing.

Dr. Amir Khan is a National Health Service (NHS) doctor in England. He’s also a “television doctor” who works with Good Morning Britain and on ITV’s Lorraine show. He appeared on the latter this past Thursday. Dr. Khan got on TV and said higher energy bills may cause heart attacks and strokes. He said that people in cold houses will have constricted blood vessels, which causes the cardiac issues. In other words, he is trying to further normalize heart attacks and strokes in young people, instead of just saying people will shiver and be cold because, it’s cold.

Doctors, particularly in the United States, are business men and women. They are for-profit entities that earn commissions when they hook you on big pharma drugs, put you through cancer treatments, inject you with Pfizer/Moderna mRNA, etc. The fact these people are too stupid to even save themselves from the lethal injections tells you everything you need to know.

We’ve posited before that healthcare is going to look very different in the next 4-5 years. Older doctors will/do die and retire naturally even without the shots. All the young ones who are supposed to replace the old guys and gals are dying “suddenly and unexpectedly” in 2021 and 2022. They’re all choosing death by volunteering for the great human cull. But there’s a method to the madness related to the powers-that-be wanting to kill off doctors and nurses. Only time will tell why.

Previous :Jordan Peterson “the theft of GoFundMe donations to the Truckers was the single worst act of political corruption I have ever witnessed in Canada”
Next : MintPress study: NY Times, Washington Post driving U.S. to war with Russia over Ukraine
Receive Our Free Email Newsletter