As Joe Biden sends Americans to their deaths to fight for fascists, history shows demonization and internment camps await those who stand against their ‘end times war’

(Natural News) Remember back in 2016, during the election between Donald Trump and Hillary Clinton, when all the globalist mouthpieces could babble on about was a ‘Russian propaganda network‘ here in America that ‘was used to spread fake news‘ about Hillary?

With the Washington Post using a shadowy group of termites who called themselves ‘Prop or Not‘ to ‘weed out‘ all of the independent news websites all across America who were allegedly spewing ‘Russian dis-info‘ about Hillary, that ‘Prop or Not‘ list is still up for the world to see, with All News Pipeline still on the list despite the fact that the Washington Post was forced to issue a correction to that 2016 story.

And that Washington Post story was picked up all across the country and the world, leading Democrats who still get their ‘news‘ from the REAL propaganda outlets, the mainstream media, completely oblivious to reality, such as this Time story from 2019 titled “Here’s What We Know So Far About Russia’s Election Meddling”.

Yet as we pointed out several times of the ‘Prop or Not‘ list, it contains the names of many of our favorite independent news websites, including Natural News, Zero Hedge, SHTFPlan, the Economic Collapse Blog and many more, as if they were setting out then to destroy the independent media.

So while some might ask, why are we bringing up that 2016 story now, the answer is quite clear when we see the direction we’re now headed, towards a fiery, end times war, we expect the globalists demonization of the independent media to be kicked into overdrive as war arrives and the independent media continues to speak out strongly against a war, but not because we’re all ‘Russians‘ but because we stand strongly against insanity.

So before we get into what they did to American citizens who just happened to be Japanese back in World War 2, let’s take a look at that 2016 Washington Post story that so many on the left still believe to be factual though it itself peddles nothing but leftist propaganda.

The flood of “fake news” this election season got support from a sophisticated Russian propaganda campaign that created and spread misleading articles online with the goal of punishing Democrat Hillary Clinton, helping Republican Donald Trump and undermining faith in American democracy, say independent researchers who tracked the operation.

Russia’s increasingly sophisticated propaganda machinery — including thousands of botnets, teams of paid human “trolls,” and networks of websites and social-media accounts — echoed and amplified right-wing sites across the Internet as they portrayed Clinton as a criminal hiding potentially fatal health problems and preparing to hand control of the nation to a shadowy cabal of global financiers. The effort also sought to heighten the appearance of international tensions and promote fear of looming hostilities with nuclear-armed Russia.

Two teams of independent researchers found that the Russians exploited American-made technology platforms to attack U.S. democracy at a particularly vulnerable moment, as an insurgent candidate harnessed a wide range of grievances to claim the White House. The sophistication of the Russian tactics may complicate efforts by Facebook and Google to crack down on “fake news,” as they have vowed to do after widespread complaints about the problem.

There is no way to know whether the Russian campaign proved decisive in electing Trump, but researchers portray it as part of a broadly effective strategy of sowing distrust in U.S. democracy and its leaders. The tactics included penetrating the computers of election officials in several states and releasing troves of hacked emails that embarrassed Clinton in the final months of her campaign. 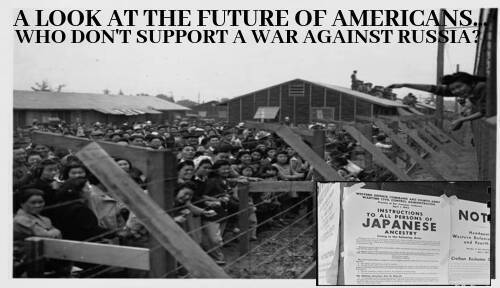 Yet those ‘troves of hacked emails‘ that embarrassed Hillary Clinton were her real emails, not something ‘fake‘ as they’d love us to believe, and remember what Hillary said of law-abiding Americans who happen to think much differently than her while she was US Secretary of State? From this CBS New York story.:

“We really need camps for adults,” Clinton said at the American Camp Association, New York and New Jersey’s Tri State CAMP Conference. “Maybe mix it up a little bit.” Playing on the colors of U.S. politics, she imagined a red cabin and a blue cabin where people “have to come together and actually listen to each other. Wouldn’t that be a novel idea?”

Not just the first time that Hillary has mentioned ‘re-educating‘ Americans who don’t agree with her satanic brand of politics, we can never forget that during both World War I and World War II, American citizens of German ancestry were thrown into ‘internment camps‘ here in the US, despite the fact that they were Americans, as were Americans of Japanese descent during World War II.

Giving all of us another sign of what may be on the horizon here in America should the globalists succeed at getting us into World War III, we should continue to pay attention to the drumbeat of the mainstream media demonizing those who don’t want war with Russia as being ‘supporters of Russia‘, despite the fact that nothing could be further from the truth in our case here at ANP.

We simply prefer to see America free from mushroom clouds and nuclear radiation spreading across the land, our electrical grid in tatters and our nation well on our way towards 90% depopulation or more.

Previous :The day Jake Tapper sold his soul to pharma
Next : The results of the most reckless human experimentation in history are flowing in as quickly as the bodies pile up: The jab is a huge success if its true purpose is depopulation
Receive Our Free Email Newsletter

China strategically developed contingency plans years ago to withstand economic sanctions, WWIII
The DOLLAR will DIE… and the Ruble will DOMINATE as “commodities-based” currencies make paper fiat obsolete
Ex-intel agent David Lester Straight tells Ann Vandersteel: Americans have allowed corporations to rule America – Brighteon.TV
Lunacy: Russian member of Parliament demands “reparations” from U.S., return of Alaska, fort in California
ANALYSIS: Russia is winning, America is self-destructing… prepare for EXTREME POVERTY as 50-year economic fairy tale implodes
US leaders are pursuing an insane, treacherous, game of global “chicken” with Putin, who commands vastly superior offensive and defensive military weapons
As history is rewritten like Orwell’s dystopian warnings and they rush towards global dictatorship, what use is ‘democracy’ when secret societies control America and the world?
Wake up, America – they really are trying to destroy us
Steve Quayle tells Mike Adams: Globalists want to achieve the extermination of the human race through nuclear war
Biden declares US ban on Russian oil imports in response to Putin’s Ukraine invasion