(Natural News) Remember the first mainstream-concocted fable about the origins of COVID-19? Mainstream fake news outlets around the world claimed it all started because some little wet market in China was serving up infected bat meat. That was before everyone besides Fauci and his cohorts knew that the virus had lab-created “gain of function” ability to transmit from bats to humans. After a few months, the entire narrative collapsed, and the truth about the man-made, signature “novel” virus was revealed to the world, and in just two words: Wuhan lab.

Now, believe it or not, mainstream media outlets online are pushing the exact same narrative to preempt the next biological weapon release by claiming that “bushmeat” disguised as fish is being imported into the USA at several ports, and US Customs and Border Patrol are doing their best to stop it before another deadly pandemic is set in motion. Sure.

Fake news enthusiasts around the world always go for the bait, hook-line-and-sinker. Yet, even after the biggest lies are debunked, most of the brainwashed sheeple still believe wholeheartedly in the fake narratives, like the Trump-Russia-collusion hoax and the Chinese wet market Covid origins hoax. Now the news media is setting up the narrative for another bioweapon release.

According to US Customs and Border Patrol (CBP) stations around the nation, agents have “identified a trend” of passengers returning from Africa who have exotic “bushmeat” tucked away with their belongings. When the agents question them about it, they say it’s just fish. Bushmeat is supposedly a combination of monkey, rat and bat meat, and is illegal and very “dangerous.”

According to mainstream news outlets and the CDC, bushmeat is showing up more and more at our nation’s busiest airports, as of January, 2022. According to customs agents, fish is only a small portion of the meat, and the rest is likely to start the next pandemic should it get distributed around the country. Monkeys, rats and bats, oh my!

Bushmeat is usually dried, salted or smoked, all prepping methods that DO NOT render the meat safe or “noninfectious.” The meat could spread a new wave of biological terror, including Ebola or Anothercon, so officials are telling all Americans to be on the lookout, whatever that means. If you see something, say something, right?

Here we go again. The CDC is demanding that all “bushmeat” found at US ports “be destroyed along with any personal items that may have come in contact with the bushmeat.” Grab everything those bushmeat smugglers bring on the plane and throw it in the nearest garbage can, so we’ll all be safe from Anothercon. That will teach those exotic meat importers who is boss and who has only Americans’ safety in mind. Maybe the CDC should run PCR tests on the smuggler’s luggage bags just to be extra careful.

Bushmeat has been discovered by the CBP repeatedly at US port hubs, including Minneapolis St. Paul International Airport, where officers seized over “100 pounds” of monkey-bat-rat-antelope-fish burgers just last week. Another traveler from Liberia supposedly had a few raw monkey arms and some rib “material” in his bag, according to the port director. Agriculture “specialists” are warning all Americans right now about bushmeat that “could have deadly effects and lead to another outbreak of disease.” Here are some pictures from CBP in case you don’t know what bushmeat looks like (or in case you are experiencing any “hesitancy” about believing the fake news lies). 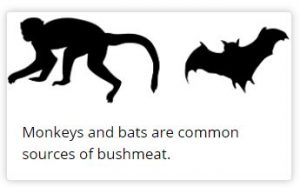 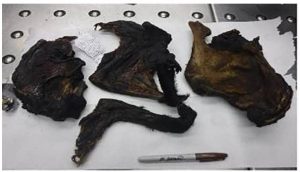 Please do not bring raw monkey arms in your luggage on airplanes coming to America. The CDC is very concerned. Also avoid making burgers, patties and hotdogs with cane rats and duiker antelope. Stick to the much safer versions in America made with E-coli-infected cow and pig parts, or salmonella-infected fish and eggs. According to customs agents, you will be fined a quarter of a million dollars if you’re caught trying to smuggle monkey-bat-rat burgers into the country.

The CDC says to “take action” and tell your friends and family to avoid African bushmeat so we don’t start another pandemic on the heels of the first one finally fizzling out. Always wear your gloves and mask while handling bushmeat, and then wash with hot soapy water after. If you do choose to eat a $250,000 illegal bush-burger, make sure it’s cooked thoroughly.

Be sure to bookmark Vaccines.news for updates on experimental vaccines and boosters that can cause blood clots, ADE and other horrific side effects.

Previous :PVI – Post vaccine illness is the new pandemic
Next : Woman at Michigan School Board meeting blows whistle on LITTER BOXES placed in school bathrooms for students who identify as CATS
Receive Our Free Email Newsletter