If we stay on this path, Joe Biden and his ‘woke’ military’s legacy will be mushroom clouds over America: All eyes open for a globalist false flag to launch WW3

(Natural News) With a very weak Joe Biden as US president, along with his ‘woke‘ military, giving Vladimir Putin and Russia the go ahead to invade Ukraine as Jack Posobiec recently alluded to in this tweet which also took task to Democrats claims that it was Putin that ‘owned‘ the Trump White House, in that tweet, Posobiec asked a great question:

With lead stories across the mainstream media screaming out headlines of war ahead, with the Associated Press warning of Russian war games ongoing right now on the Ukrainian border, putting out this story titled “Russia moves more troops westward amid Ukraine tensions,” while the Daily Mail published this new story titled “White House believes Russian invasion of Ukraine could be imminent: Jen Psaki warns there is an ‘extremely dangerous situation’ at the border”, we should all remember there is a long history of countries using ‘false flags‘ to start wars, so should WW3 be any different?

With wars also giving governments incredible powers over the people of their country, exactly what Biden and Democrats have long been seeking via ‘vax mandates‘ and lockdowns, who reading this story doesn’t think it’ll be Biden and the ‘deep state‘ who launch a false flag to get them into a much-needed war at a time when they just suffered huge defeats politically? As we hear in the videos at the bottom of this story, globalists talk of a Russian false flag to justify them invading the Ukraine is actually a warning of a forthcoming globalists false flag upon Russia.

As we see in the screenshot below via google search for a ‘Russia, false flag‘ search, the talk of Russia carrying out a false flag as a pretext to invade Ukraine is running rampant. Stories within the last 2 days warning of a Russian false flag include.:

From the Military Times: “Russia denies US claim it seeks ‘false flag’ pretext to invade Ukraine”

From the Hill: “Russia dismisses US allegations of plans for false flag operation as pretext to invade Ukraine”

From the Mirror: “Ukraine crisis: How Vladimir Putin overplayed his hand with ‘false flag’ his best option” 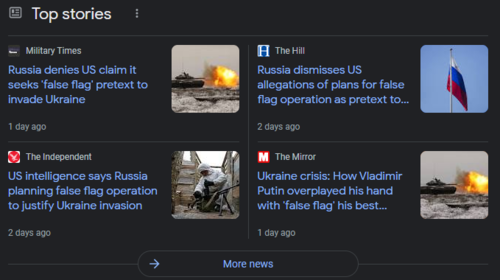 So with the left absolutely loving to blame others for what they themselves are doing, such as them continuously calling Conservatives ‘racists‘ or ‘haters‘ when it is they themselves pushing racism and hatred upon America, we should remember the warning from Nazi Germany’s convicted war criminal, Hermann Goering, after his conviction at Nuremberg.

Claiming that the people of any nation could be brought around to supporting a war, simply via the incitement of fear of attack, as Goering warned, “the people can always be brought to the bidding of the leaders.” From this 2018 story at the MinnPost we see what may be the most likely way Biden will be able to get America into a war that ‘the people‘ would support, pummel us with fear. Sound familiar?

Gustave Gilbert, an American psychologist fluent in German, worked as a translator with the Nuremberg Tribunal and interviewed Goering in the days between his conviction and his suicide. Gilbert then wrote “Nuremberg Diary,” a 1947 book based on interviews with Goering and other Nuremberg defendants.

Gilbert asked Goering how it was possible to build and sustain public support for a war effort, especially in Germany, which had barely recovered from the still recent disaster of World War I.

“Why, of course, the people don’t want war,” Goering shrugged.

“Why would some poor slob on a farm want to risk his life in a war when the best that he can get out of it is to come back to his farm in one piece. Naturally, the common people don’t want war; neither in Russia nor in England nor in America, nor for that matter in Germany. That is understood.

“But, after all, it is the leaders of the country who determine the policy and it is always a simple matter to drag the people along, whether it is a democracy or a fascist dictatorship or a Parliament or a Communist dictatorship.”

“There is one difference,” [Gilbert] pointed out. “In a democracy the people have some say in the matter through their elected representatives, and in the United States only Congress can declare wars.”

“Oh, that is all well and good, [replied Goering] but, voice or no voice, the people can always be brought to the bidding of the leaders. That is easy. All you have to do is tell them they are being attacked and denounce the pacifists for lack of patriotism and exposing the country to danger. It works the same way in any country.”

With that strategy also sounding exactly like what the left is doing to America now over COVID and the ‘vaxxes‘, attempting to scare the wits out of half the population who’re being hypnotized into believing that they’re somehow ‘safe‘ from COVID if they’d been ‘vaxxed‘ while the ‘unvaxxed‘ are putting them in mortal danger, Democrats have become a one-trick pony. Though Biden’s woke military will surely meet it’s match in Putin’s Russia should things continue to escalate out of control on the global war front.

Yet we must keep in mind, with the left seeking to cement their rule into place for America’s future well into 2025 and beyond, and the US Supreme Court at least striking down his 100+ employee ‘vaccine mandate‘ which the left hoped would give them control over all medium-to-large sized businesses, these devils NEED something else to help them bring in their ‘iron fist‘, and wars have traditionally given governments exactly what they need to do so. 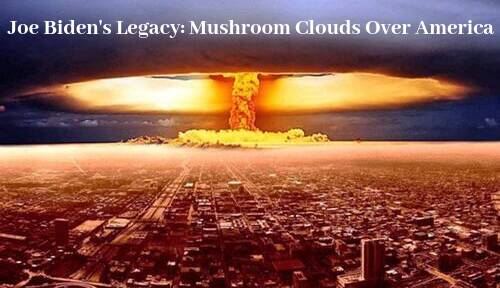 So with officials in the UK being told to be prepared to switch into ‘crisis mode over Russia‘ according to this new Bloomberg story while Russia has been removing staff from its Embassy in the Ukraine just some of the latest signs of some kind of war being prepared for that could quickly spiral out of control across the planet, the following extended excerpt comes to us from this story over at History (saved at Archive) titled “THE TRUTH ABOUT ‘FALSE FLAGS’ FROM NAZI GERMANY, TO THE VIETNAM WAR”.

If we stay on this path, Joe Biden and his ‘woke’ military’s legacy will be mushroom clouds over America: All eyes open for a globalist false flag to launch WW3
Stevie Wonder says Aretha Franklin was killed by global warming… seriously