“NASCAR is excited to partner with the Carolinas LGBT+ Chamber of Commerce,” said Brandon Thompson, NASCAR’s vice president of diversity and inclusion. “With NASCAR offices and much of our industry based in the Carolinas, we look forward to working with CLGBTCC in support of its mission to foster equity, inclusion and economic prosperity for the LGBTQ community.”

“We know that fans of NASCAR look different, they love different, they’re differently able,” Thompson told radio station WFAE in December after NASCAR made “a major donation” to the Carolinas LGBT+ Chamber of Commerce. “This gives us an opportunity to let them know that we see them as well as support them.”

The Carolinas LGBT+ Chamber of Commerce is described in NASCAR’s press release as “an organization of gay, lesbian, bisexual, transgender and LGBT+ and allied businesses, corporations and professionals throughout western North Carolina and most of South Carolina. Its mission is to foster equity, inclusion and economic prosperity for the LGBTQ community through strategic policy, professional enrichment, ally partnerships and economic development.”

“The intentionality of [NASCAR’s] partnership will allow the Carolinas LGBT+ Chamber to leverage relationships and increase our work in the area of diversity, equity and inclusion,” said Tiffany Keaton, the vice chair of the Carolinas LGBT+ Chamber of Commerce. “The distinct brand that NASCAR brings to the chamber validates their commitment to equality and non-discrimination both on and off the track. It is an honor to name the league our ‘DE&I Partner’ for 2022, and I look forward to developing this amazing relationship.”

“The Chamber’s annual Diversity, Equity & Inclusion partnership funds and supports all of its training and programming in diversity, equity and inclusion, and it allows the organization to have a more expansive reach throughout the region,” explains NASCAR’s press release.

NASCAR said its new commitment is a “critical component” of “progress for NASCAR.”

What is left unsaid is NASCAR’S unspoken commitment to promoting to its fans – especially young auto racing enthusiasts – that homosexuality and transgenderism are normal and that non-gendered same-sex “marriages” fit the definition of marriage.

With NASCAR’s move, virtually every American sport league is now actively, unashamedly pro-LGBT, committed to promoting sodomy as good, and essentially tossing the complementarity of man and woman into the dumpster of history.

NASCAR’s tweeted announcement is similar to a National Football League (NFL) commercial last year in which the league declared, “FOOTBALL IS GAY.”

An NFL Instagram post went further and showed every team logo redecorated in the colors of the rainbow flag. 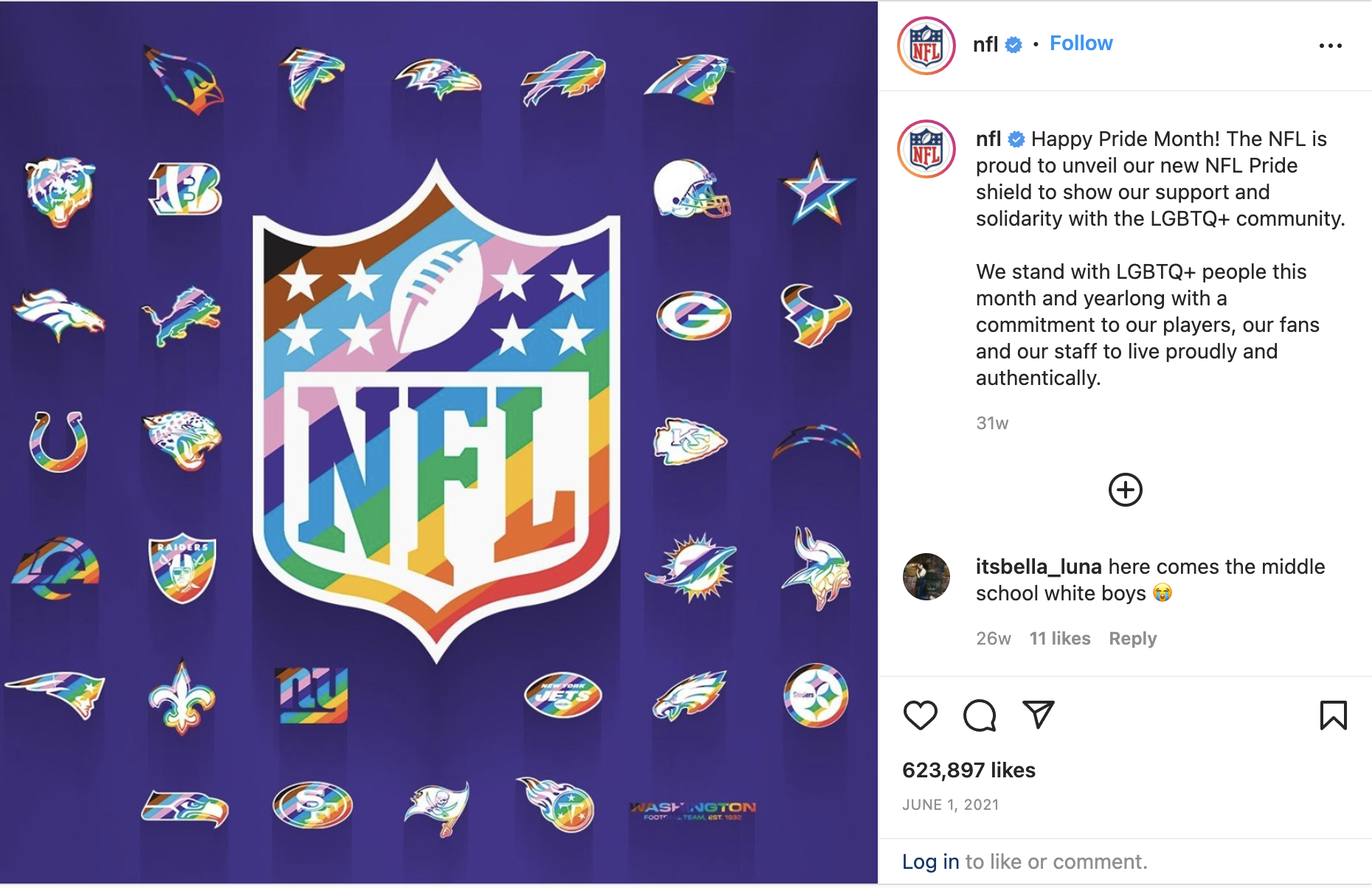 Just a handful of big-league sports teams were holding “pride” events a decade ago. In 2015, only the NFL’s New England Patriots and MLB’s Tampa Bay Rays were among 379 corporations who signed an amicus brief asking the U.S. Supreme Court to strike down all state laws against same-sex “marriage.”

However, within just a few short years, every single NFL, NHL, NBA, and MLB team would be hosting “pride” events and selling “pride” shirts, hats, and other items emblazoned with rainbow-enhanced team logos. Even the nascent Premiere League Lacrosse (PLL) has jumped to support LGBT “pride.”

“Caitlyn’s decision to publicly come out as a transgender woman and live as Caitlyn Jenner displayed enormous courage and self-acceptance,” claimed ESPN co-producer Maura Mandt at the time. Gender-confused Jenner accepted his award wearing a dress.

In 2020, the nation witnessed an unthinkable degradation: As the whole country watched, three Marxist women forced nearly every Major League Baseball player to kneel before them and their strange countercultural creed.

By bending their knees, these men paid homage not to civil rights, but to Marxism; to the destruction of the nuclear family; to transgender and gay political power squashing not just religious liberty, but religion itself; to the defunding of police; and to the erasure of western history and culture.

As I wrote at the time:

The revolution was over before it began, as hundreds of professional ballplayers in recent weeks quietly surrendered themselves to the abhorrent ideology of Black Lives Matter, founded in 2013 by a trio of militant Marxist women – Patrisse Khan-Cullers, Opal Tometi, and Alicia Garza. Khan-Cullers identifies as lesbian and Garza is “married” to a “transgender man.”

The queer-affirming women pulled off a mass castration of the players’ Judeo-Christian beliefs and whatever patriotism they held in their hearts. What’s more, the emasculation of these athletes was televised.

MLB has been normalizing homosexuality for young baseball fans for years, going so far as to expose them to “Pride Night” gay “marriage” proposals and former Massachusetts Congressman Barney Frank kissing his “husband” out on the pitcher’s mound. 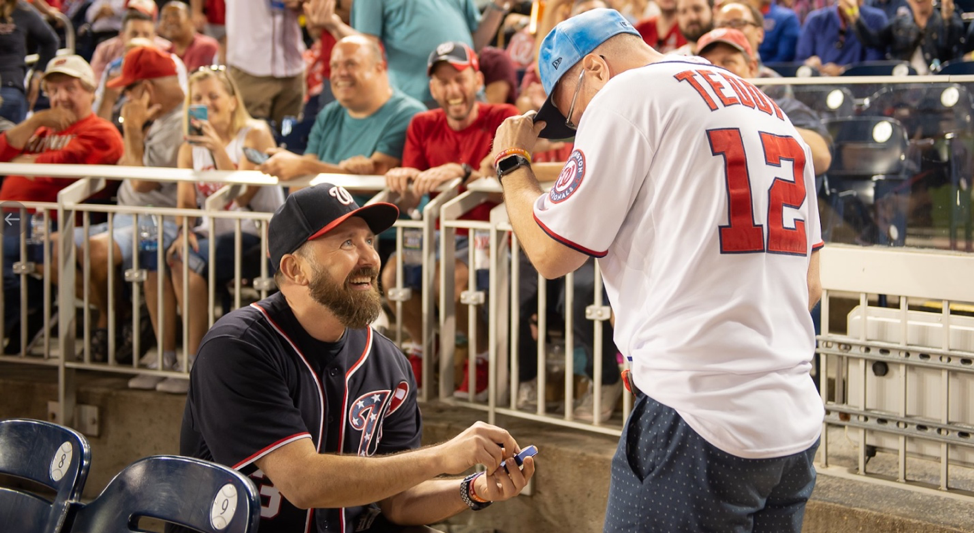 LGBT: ‘We’ll convert your children, we’re coming for them’

Last June, the Gay Men’s chorus of San Francisco published their performance of a song which declared, “We’ll convert your children, we’re coming for them.”

Although the composer and lyricist later claimed that the song was intended as parody, the message was loud and clear: We’ve conquered, we’re unstoppable.

The song was not a parody. It was about the political power that LGBT forces have amassed, overwhelming every aspect of American culture.

Why wouldn’t LGBT activists come for your children? They’ve already come for NASCAR and every major American sport league and won. If NFL offensive linemen and defensive tackles can be captured by LGBT forces, and MLB and NBA players be held hostage, grabbing your kids’ hearts and minds is no big deal.