(Natural News) USA Today might have one or more pedophiles working in its newsroom.

The national newspaper published, then deleted, several pro-pedo tweets yesterday about a story that justifies sexual attraction to children. It’s the latest pedo scandal to engulf a major news organization.

CNN recently learned that two top producers were pedos; one was arrested and police are investigating the other.

Yet the CNN scandal and now USA Today’s pro-pedo propaganda might have exposed a larger truth. Just as they’ve infiltrated Hollywood, pedos have apparently infiltrated the news industry.

The material in the story sounds like it was written by the “transgender” professor recently forced to quit Old Dominion University. He said pedos are “moral” as long as they don’t act on their desire to have sex with kids.

“Scientists who study the sexual disorder say it is also among the most misunderstood,” the story began. “Researchers who study pedophilia say the term describes an attraction, not an action, and using it interchangeably with ‘abuse’ fuels misperceptions.”

You know what’s coming next: A long apologia for the disturbed weirdos who want to have sex with children. Among the gems the newspaper disclosed were these:

Scientists have in recent decades improved their understanding of pedophilia’s causes, prenatal and early childhood risk factors as well as how pedophiles can better control impulses.

One of the most significant findings is that scientists who study the disorder say pedophilia is determined in the womb, though environmental factors may influence whether someone acts on an urge to abuse. 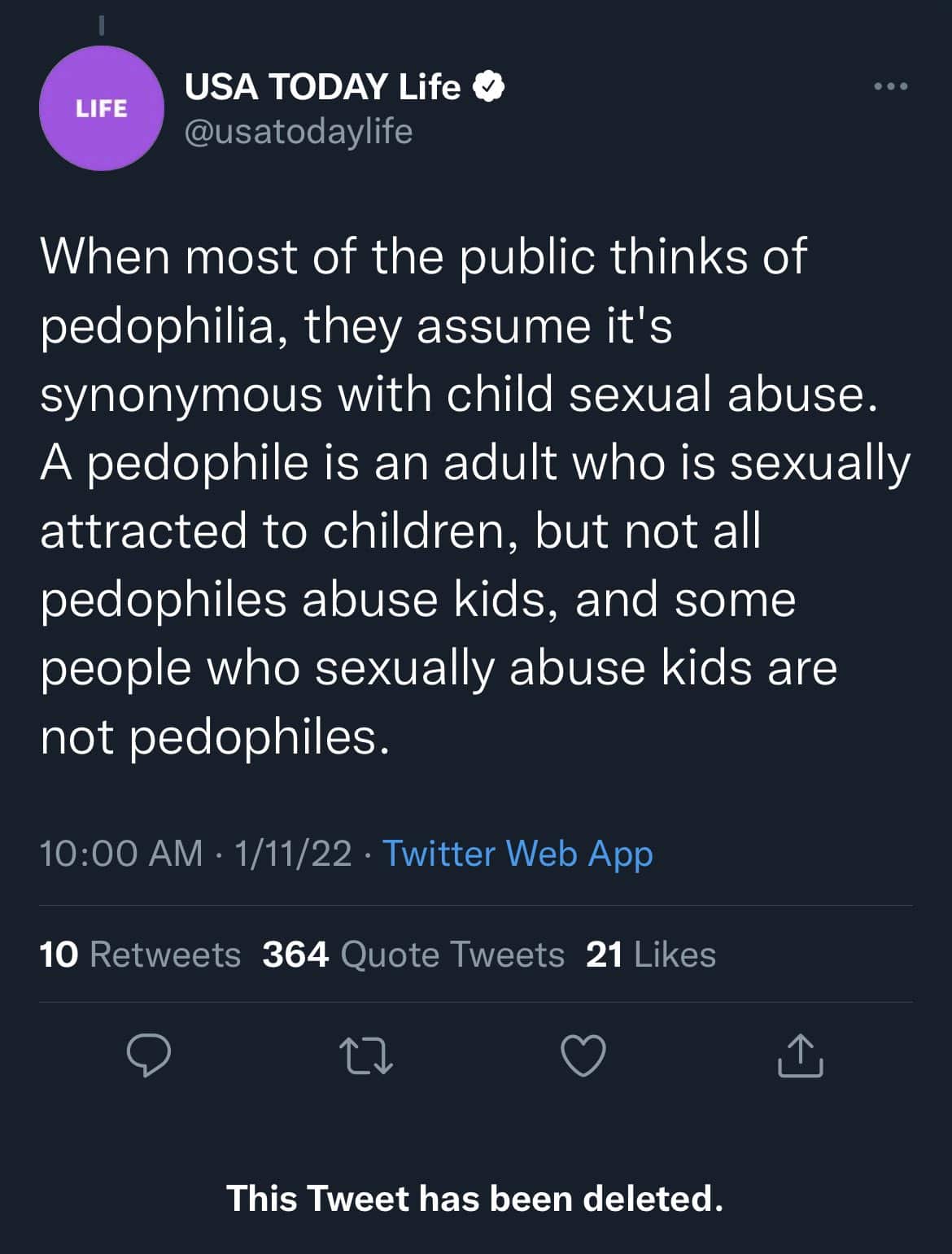 And, of course, “they’re born that way.”

“The evidence suggests it is inborn. It’s neurological,” headshrinker James Cantor told the newspaper. Cantor is a “sex researcher and former editor-in-chief of, Sexual Abuse: A Journal of Research and Treatment.”

And it doesn’t matter whether the pedo is attracted to kids, USA Today assured readers:

Another skull doctor said some people molest kids “because of anger,” or “they’re scared of adult women,” or “to get revenge. But they don’t actually have an age preference for prepubescent children.”

But if they do prefer kids, that’s OK.

Research also offers insights into risk factors. Seto said men with pedophilia have a much higher incidence of early childhood head injury. One study on diagnosed pedophiles showed they are more likely to report their mothers had received psychiatric treatment, which suggests the disorder may be influenced by genetic factors.

Yet if pedos have a “much higher incidence of early childhood head injury,” then they weren’t “born that way.” The crack on the noggin did it. If Mom was a nutcase, the kid might be too, but not because of “genes.” Researchers have learned that mental illness is not only genetic but also contagious. Nurture, not just nature, affects a child’s future mental health.

USA Today tweeted a thread about pedos that included the “womb” theory and other quotes from the story, which was hidden behind a paywall.

Twitter exploded, and so the newspaper removed the paywall and killed the thread. “The initial thread lacked the context that was within the story and we made the decision to pull down the entire thread,” the newspaper tweeted.

.@usatodaylife has their pedophilia-backing piece behind the paywall and is labeled “for subscribers.” So USA Today subscribers are pedophiles? pic.twitter.com/VMB3GCQ2M8

The initial thread lacked the context that was within the story and we made the decision the pull down the entire thread.

Hi @USAToday! Why did you change the headline on your pedophile article? pic.twitter.com/wHhCxslaG6

Of course, it changed the headline, too, as Jack Posobiec observed. Original: “What the public keeps getting wrong about pedophilia.” New and improved: “The complicated research behind pedophilia.”

Given what has occurred at CNN, top execs at Gannett might consider an internal investigation to find out who conceived the story and why, and who approved it for publication.

In late December, Jake Tapper’s producer, Rick Saleeby, quit the leftist network after Project Veritas outed him as a possible child rapist. That scandal was taking off as FBI agents arrested John Griffin, Chris Cuomo’s former producer, for running a child-rape scheme out of his ski lodge in Vermont. He paid mothers for sex romps with their daughters.

Concerned students and a Twitter storm over pro-pedo propaganda forced ODU to cashier Professor Allyn Walker. The trouble for Walker began after an interview with Prostasia’s Noah Berlatsky, who thinks pedos are a “stigmatized group.” Prostasia publishes pro-pedo propaganda.

Walker, who bills himself as a “queer criminologist,” tried to normalize pedos and said they must be called Minor-Attracted Persons, or MAPS.

Berlatksy has written for NBC and The Atlantic.

The number of pedos working at USA Today is unknown. 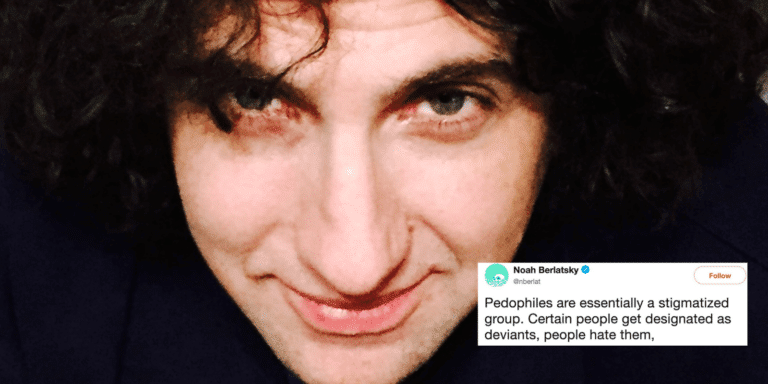