SHOCKER: America has completely caught up to the Chinese police state in terms of controlling, censoring, and punishing the populace for dissident behavior

(Natural News) The only way the Biden Regime had a chance of taking over the US government was with the help of Communist China. There was no other way to win (steal) the election and run the scamdemic in full swing. That meant having complete control of the mass media, all of social media, Google, YouTube, most newspapers, and nearly every hospital in the country.

The communists in Washington DC also needed to set some extreme “examples” of what happens to anyone who opposes this administration, and that is why the January 6th “insurrectionists” are still in jail, just like all political dissidents in China. It’s a wonder the CCP/Biden Regime has not already harvested the organs of those prisoners to sell on the black market.

Commissars are officials of the Communist Party, especially in the former Soviet Union and present-day China, who are responsible for political organization and misinformation (reeducation using propaganda). Commissars now run all of the mass media and social media in America, just like in China, and just as aggressively.

Most Americans, if told this right now, would call it conspiracy theory, and they would be dead wrong. They have no clue just how much information is hidden from them in order to keep them oblivious, silent and compliant.

Most Americans believe everything they see and hear on mass media. They can’t even begin to fathom that they are being lied to right and left, about everything from war to sickness, and from vaccines to prescription medications. Here are some “conspiracy theories” that have turned out to be true just in the past few years, turning America quickly into a communist-media-controlled society where most of the populace is so censored and confused they can’t see the forest for the trees.

Here’s Steve Kirsch’s chart on the differences in censorship methods used right now in the US vs. China: 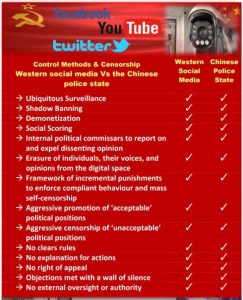 The so-called “Black Mirror” of Communist China is here. Stay tuned and stay frosty. Tune your internet to Censored.news for huge swaths of truth news that’s being censored from the rest of media as you read this.