As America is pushed beyond the breaking point, be prepared for the coming invasion as Biden and Democrats catapult us towards the ‘eve of destruction’

(Natural News) The wreckage that our country faces did not start with the Biden administration. The socialist tendencies of the progressive socialist Democrats started way back in the era of Woodrow Wilson. Since then, the government has required the citizenry to bow down to the false god of governmental power.

Senator Bernie Sanders has stated, and Chyna Joe has echoed, that we can use the Covid 19 crisis to change the basic tenets of government and society work. Instead, the word-salads and doublespeak will work to tie the power they crave by aligning with such other areas as climate change, gun control, and the continuing racial divisiveness already being seen in our country. Biden talks of “white supremacy” and “diversity” as hallmarks of his enlightenment without ever defining what he means.

Those of the left are fearful of many things. Nationalism, liberty, patriotism, free speech are now being called evil by those who wish to destroy our country. Corporatism cannot take over until the world’s nations are one, with corporatist oligarchs deciding everything for everyone. These oligarchs will allocate resources. In that way, those of fallen countries can not retaliate. If there is any feedback, they will take the resources like taking a toy from a little child for misbehaving. These corporatists will not hesitate to use any effort to collapse our culture and economics to ensure the United States will fall and become just another asset for the socialists and corporatists to split amongst themselves.

The leftists feel they do not need to explain or define what they mean about any garbage they fill the airwaves with. They feel they are correct, that you must agree with the diktats they spew forth to the masses, and that they have a narrative that will take no questions and allows no deviation. And it must be understood that your doing right or wrong does not matter to them. Morality is irrelevant. Because they think that their cause is just, the principles of duty, honor, and country are irrelevant to them. It is all about power, the power they crave to instruct every part of our lives.

Big Media, Big Tech, the Media work in lockstep to spread disinformation, suppression of free thought, and the wolfpack “social justice” soy-boys that descend on any that disagree with the socialist agenda. They are very careful to stay unknown and to determine that all media promulgate the talking points that their handlers have told them Biden, along with his handlers in China and the progressive socialist party, has now started to send illegal aliens into the country’s interior to the red states that did not vote for him. This serves two purposes for the globalists running the country.

Because they are not tested at the border, but quickly rushed to other areas of the country without notification, there is no way to determine how many have Covid. Those that do have Covid, (thousands by CBP counting) will spread to areas all around the country. Then the politicized “experts” will declare an emergency and shut down the economy once again.

And, if the aliens survive Covid, the progressive socialists think they will be reliable voters, knowing that more freebies will come their way if they vote for the leftists.

Biden, as President, is the greatest threat to the United States and the world. He is the doddering old man who is being used by the internal elements in our country intent on tyrant and oppression. 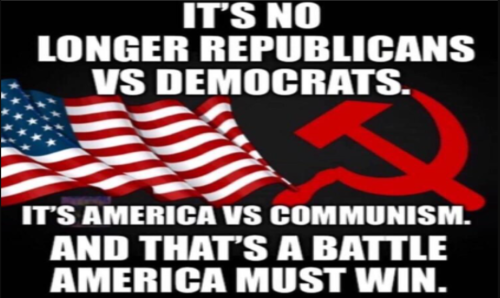 The difference is that using the old soviet buzzwords of the past, the new form of tyranny uses the word “woke.” It is being used to proclaim that they are better than anyone else, more intelligent than you, and know what is best for you. And what does it mean to be woke? Ask any woke socialist, and you will hear of such things as anti-white racism and “social justice.”

You will be lectured about the destruction of such things like morality, respect, and liberty as anachronisms no longer required by society. You will hear of the baseless arguments against religion, especially the Catholic and Christian faiths. (Muslims are fine) and you will hear of how the majority of the country are low IQ bigots because they disagree with homosexuality.

I as a Christian, have been called homophobic and oppressive because I disagree. A belief in traditional marriage and morality is considered old-fashioned. Woke is nothing more than lies that the progressive socialists tell themselves, so the anarchy they hope to take our country down will be better received by the citizens of this country.

The American people are starting to understand the forces of socialism tyranny that mark the behavior of the forces aligned against the American people. They know that suppression of free speech and expressions that they claim are “thought crimes,” the Coercion of the people to submit to whatever the “woke” believe is best for them, the disruption and elimination of free thinkers who recognize and oppose what the “woke” is doing.

The progressive socialist will ignore laws that attempt to stop the march that is on to totalitarianism. They hope they can take the agenda far enough that there will be no way at the next election to bring an honest government back. People are awake now; there won’t be any stealing in the next election.

Chyna Joe needs to make some changes. Declaring himself as a moderate when he did what campaigning he did, has been proven to be a lie, not the first and not the last from the left. Happily being led by the progressive socialists into destruction, he reads his teleprompter and goes back to his handlers to be told what a great leader he is. Biden is nothing more than a placeholder until the leftists feel they have enough power to toss him aside and take the power they feel is theirs.

Let’s hope the American people will decide not to allow that to happen. In the progressive socialist administration of Chyna Joe, the powers that be in media, academics, celebrities, and the progressive leftists themselves have a plan to force the citizens of this country to fit the mold within the schedule to take power they have worked on for many years. The agenda is a reprise of the Obama “fundamental transformation” of the culture and beliefs of their heroes like Karl Marx and Saul Alinsky. They have shown no care about individual rights but intend to force the individuals into the ideology. The “moderate” Biden lied to the American people on many aspects of his philosophy. Far from being an uniter, Chyna Joe has aligned with the progressive socialists that are his advisors and even his Cabinet.

Paul Craig Roberts: America is erasing herself
After the Biden regime gives the media their marching orders, they push a ‘boom’ that doesn’t exist
Biden, Democrat spending primarily to blame for runaway inflation that’s only going to get worse
If you are surrounding yourself with appliances, robots and gadgets that depend on the cloud, you are begging for disaster
Beverly Hills residents arm themselves and form self-defense groups to counter rising violence
Russia threatens to deploy intermediate-range nuclear missiles in Europe as tension with US escalates
Fed survey shows Americans expect inflation to get worse
Flurry of active volcanoes will cause global COOLING and crop failures… global financial and political systems on the verge of catastrophe
Labor Secretary backs away from enforcing covid jab mandate for truckers, realizing entire supply chain will collapse if truckers aren’t allowed to work
Billionaire anarchist George Soros’ org has been caught funding “dark money” group that pushes for defunding police