(Natural News) With the COVID-19 ‘lab leak’ theory finally gaining mainstream legitimacy following recent reports from the Wall Street Journal, and an admission by Anthony Fauci that he’s now open to the possibility, formerly smug establishment ‘fact checkers’ are now scrambling to salvage their reputations after categorically dismissing a lab leak as a ‘debunked conspiracy theory.’

Fact-checking, like virtually everything the corporate media does to feign superiority, is a total scam: just another way for them to smuggle their own ideologically-driven disinformation and conspiracy theories under a more elevated facade: https://t.co/qeFb5J8CP1

The latest ‘fact checker’ to bend the knee is the Washington Post’s Glenn Kessler – who last year issued a snarky tweet to Sen. Ted Cruz (R-TX) in response to Cruz accusing WaPo of “abandoning all pretenses of journalism to produce CCP propaganda” in response to Kessler promoting a video suggesting that an accidental lab leak was ‘doubtful.’

“We deal in facts, and viewers can judge for themselves,” Kessler sniped at Cruz.

I fear @tedcruz missed the scientific animation in the video that shows how it is virtually impossible for this virus jump from the lab. Or the many interviews with actual scientists. We deal in facts, and viewers can judge for themselves. https://t.co/TprMnaHSZL

Fast forward one year, and Kessler is the proud owner of a highly ratio’d tweet after being forced to eat crow over his ‘fact checking’ with a new article entitled “How the Wuhan lab-leak theory suddenly became credible.” 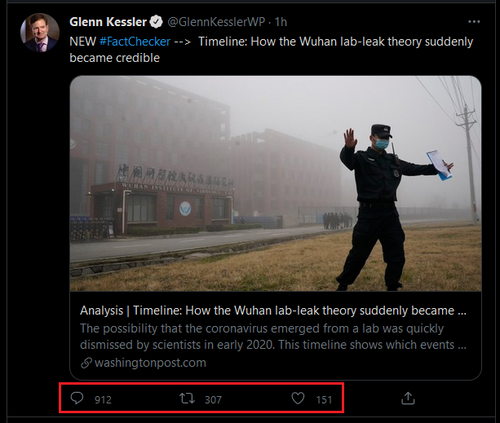 It didn’t “suddenly become credible” it was always credible. It literally always made the most sense. I understand the desired narrative media always wanted but didn’t anyone think the most likely scenario was the virus magically originated feet from the lab that worked with it? https://t.co/XO4Y5OlKLf

You should probably revisit this one. pic.twitter.com/QpZu5eNAQT

We DeAl In FaCtS!!!! pic.twitter.com/JMoYtaYGcI

I like the line about "actual scientists". But now I'm curious how could it be "virtually impossible" for a virus to get out of a lab that studies viruses.

Speaking on the issue of destroyed credibility over early Wuhan reporting and CCP apologists is retired New York Times science editor, Nicholas Wade, who slammed the MSM on Sunday for failing to investigate the origins of COVID-19.

According to Wade, the media failed to “take off its political glasses” and see beyond facts which are being obscured by the Chinese Communist Party.

“‘I think we see a sustained Chinese propaganda effort at work,” said Wade, who was a staff writer for the Science Times section of the NYT from 1982 to 2012, in an interview with Mark Levin on “Life, Liberty & Levin.”

“But, you know, more than that, it was just the blindness, if I could put it that way, of our media — we’re too polarized to see scientific issues for their own sake without putting a political gloss on them,” Wade continued. “We don’t know for sure: The origin of the virus is just we’ve got these two possible scenarios. But if you look at all the evidence and ask yourself, well, which scenario explains all these facts better on present evidence, it seems, to me at least, that the lab-escape hypothesis explains it a lot better.”

“But it’s a sort of complicated conclusion to arrive at, and I can only assume that the media was blindsided, they didn’t do the work that was necessary.”

Let’s not mince words Wade, the Media opposed the lab leak theory because President Trump promoted it, and the CCP has its tentacles deeply embedded in American propagandists who breathlessly peddle their talking points.

Read more at: ZeroHedge.com and Journalism.news

With the new state religion the ‘covidian cult’ and America on a suicidal course into oblivion, no democrat nor republican dare state the obvious: ‘The emperor has no clothes!’
326 Athlete cardiac arrests, serious issues, 183 dead, after COVID shot
Evidence suggests the Covid-19 Vaccines are prolonging this “Pandemic” and preventing the world from reaching Herd Immunity
There comes a time when there is no alternative to fighting for your life and liberty
Latest VAERS estimate: 388,000 Americans killed by the COVID vaccines
Decorated army veteran and others ARRESTED by NYPD in the cheesecake factory after REFUSAL TO SHOW PROOF OF VACCINATION – Intense VIDEOS
Juliet Valdez: 56-year-old Philippines teacher dead 12 weeks after second Sinovac injection as country mandates “vaccines” for all workers
When resistance becomes duty
People long drowning in a sea of misinformation are slowly awakening as ‘cognitive dissonance’ strikes hard & the globalist ‘Orwellian doublethink’ masks melt away
Here’s why U.S. supply chain problems will only get worse