(Natural News) The newly released Nextdoor social media app warns users that they may be engaging in racism before allowing them to send certain words or phrases, including “all lives matter” and “blue lives matter.”

Nextdoor, an app that connects neighbors with each other, has introduced a new “anti-racism” notification system that alerts users if they may be about to use offensive or bigoted language.

When the user is about to transmit the thought crime, the app asks them to consider revising their words.

“The new anti-racism notification detects certain phrases such as ‘All Lives Matter’ or ‘Blue Lives Matter,’ and prompts the author to consider editing their post or comment before it goes live,” a Nextdoor spokesperson said.

In a video demonstration for the feature, someone responds to a message about Black Lives Matter by asking, “Why just black lives? I believe all lives matter.”

A warning then pops up which announces “Hold on – the phrase “all lives matter” can be hurtful to people of color. Consider editing before you publish.”

The user in the demonstration then deletes their “all lives matter” message and writes something different to signify compliance.

The company also has a “kindness reminder” feature that “automatically flags offensive or hurtful comments.”

As Christina Maas points out, “Tech platforms are constantly trying to change and mold people’s speech.”

While race grifters and legacy media outlets have tried to brand “all lives matter” a racist dog whistle, its use is widespread.

A survey conducted last year found that a majority of Americans agreed more with the statement “all lives matter” compared to “black lives matter.” 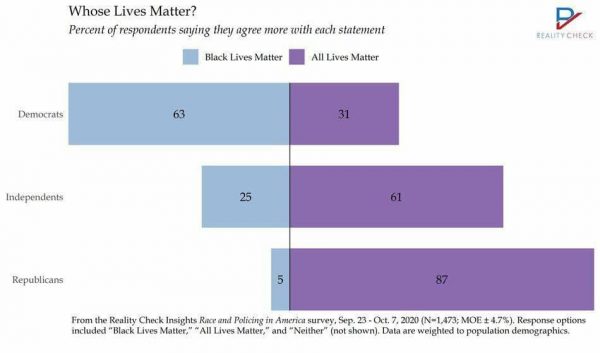 Read more at: InfoWars.com and SpeechPolice.news.

Previous :‘Get your money, girls!’: Children flaunt their bodies at Miami Drag Queen show and take dollars from LGBT perverts
Next : Chauvin guilty verdict completes the total collapse of law, order, and due process in Biden’s America
Receive Our Free Email Newsletter

More news on All Lives Matter