Unearthed documents from one of the leading Chinese Communist Party propaganda groups reveal the names of “mainstream” U.S. journalists taking junkets from the group in exchange for favorable coverage, The National Pulse can exclusively reveal.

The China-United States Exchange Foundation (CUSEF) was founded by the Vice-Chairman of the “highest-ranking entity overseeing” Chinese Communist Party’s United Front Department, an effort which aims to “co-opt and neutralize sources of potential opposition to the policies and authority” of the Chinese government. “The United Front strategy uses a range of methods to influence overseas Chinese communities, foreign governments, and other actors to take actions or adopt positions supportive of Beijing’s preferred policies,” the U.S. government report continues.

CUSEF uses United Front Department tactics of influence on Western journalists from virtually every Western media outlet: CNN, New York Times, MSNBC, The Washington Post, and many more. According to Foreign Agent Registration Act (FARA) filings with the Department of Justice, CUSEF retained Western lobbyists to aid in their quest to “effectively disseminate positive messages to the media, key influencers and opinion leaders, and the general public” regarding China.

The National Pulse can now exclusively reveal Western journalists – including those praised by President Biden and married to potential members of his White House – who are listed as having accepted trips from the Chinese Communist Party influence group.

CUSEF newsletter from 2009 and 2010 reveal the following journalists: 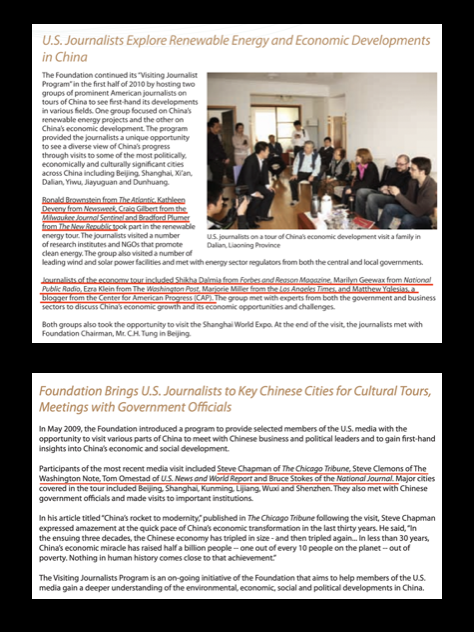 Washington Post columnist Catherine Rampell also identified herself as accepting CUSEF trips, burying a disclaimer on the bottom of two articles “The U.S. and China fight for second place” and “The Olympics gives China a second chance at human rights reforms”:

(Disclosure: My trip is being paid for by the China-United States Exchange Foundation, a Hong Kong-based nonprofit that aims to improve Americans’ understanding of China.)

While those named above represent a fraction of the journalists taking CUSEF trips, the influence of the program on participants’ subsequent reporting is easily discerned.

Trip participant Shikha Dalmia penned an op-ed entitled “China Bashing is for Losers” the same year she traveled to China.

Similarly, Bruce Stokes has shared articles warning that “decoupling” from China would “backfire” and Catharine Rampell has authored op-eds such as “Opinion: Team Trump should be careful what it wishes for on China.”

Ezra Klein appeared to laud the Chinese Communist Party’s COVID-19 response, tweeting “I keep hearing that China bought us some real time and our government wasted it doing nothing and downplaying the threat.” Fellow Vox Co-founder Matthew Yglesias also tweeted about wanting to “give Party flunkies notes” on how to better craft “propaganda” and that “Moody’s, S&P, and the People’s Bank of China should just run the government”: 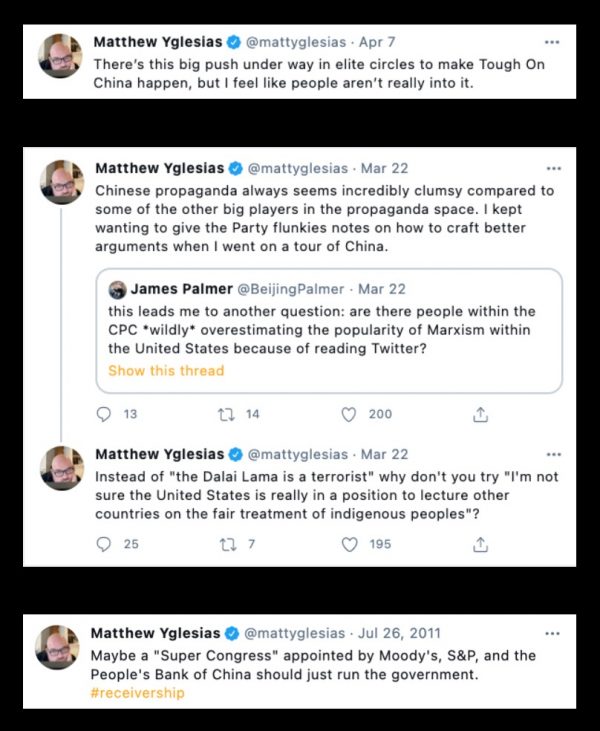 Steve Chapman, who also crusaded against Trump’s trade war, tweeted that “China may have a bad human rights record, but you don’t have to take off your shoes for airport security.” Chapman also wrote a now-deleted article that outlined “the case for buying U.S. Olympic outfits from China.”

Ronald Brownstein also pushed back against criticism of China and the World Health Organization’s handling of COVID-19. “Trump’s latest offensive to blame 100k American dead on China & World Health Organization handling of “Wuhan virus” is not only a return to familiar cultural/racial polarization but also the latest reminder that when all you have is a hammer literally everything looks like a nail,” he tweeted. The comments followed Brownstein authoring a CNN op-ed attacking Trump’s trade war with China.

All Roads Lead to Biden.

In addition to the spouse of the potential Deputy Secretary of State appearing on the list, a journalist on the list – Steve Clemons – has been praised by President Biden.

Biden told his Chinese Communist Party counterpart that Clemons was a “very important man” that he should “really want to speak to”:

While taking pictures of the two Vice Presidents with a new iPhone 5, Vice President Biden pointed at your pool, whose name is Steve Clemons, and gestured to VP Li Yuancho saying “he is a very important man. Seriously he is important.”  Your pool demurred as best he could. This will surprise some but it is true.

VP Biden winked the direction of your pool and the two vice presidents walked into the banquet hall.

Clemons’s pool report continued, describing how Biden, while accompanied by his son Hunter, offered to buy him an ice cream bar:

Quite suddenly and 2:34 pm, the vice president’s motorcade stopped with Vice President Biden, his son Hunter Biden, and granddaughter Finnegan Biden jumping out of their vehicles.  They began to walk along the south side of the shopping street, zeroing in first on a small shop that had nothing classic in it—but sold water, sodas, various household convenience items and Magnum ice cream bars.  The vice president seemed thrilled to find the Magnum bars and decided to use your pool as a prop again, calling out to your pool, and saying “you want an ice cream bar?”

Your pool replied, “Don’t tempt your pool … but no.”

Clemons, who has also written articles proclaiming “Biden gets China,” has also tweeted about the development of “a new global order” with China as the “anchor”:

Read more at: TheNationalPulse.com and Corruption.news.

Latest WHO report about Covid-19 origins part of CCP information warfare
NAMED & SHAMED: The “journalists” who went on Chinese Communist Party junkets, then delivered “favorable coverage”
China launches app encouraging citizens to report others for expressing “mistaken opinions” or denying CCP-approved official history
It is time to dismantle the World Health Organization
Communist China building nearly 100 more biolabs similar to the Wuhan Institute of Virology
Chinese four-legged robot sparks speculation that its makers stole US tech
Top 10 LIES about COVID-19 that at least half of all Americans actually believe
US solar industry has to deal with the fact its supply chains are reliant on Xinjiang, where genocide and slave labor are rampant
CCP relying on social media platforms like Facebook to spread Xinjiang propaganda
The CDC has been working WITH the CCP since the beginning of the covid-19 scandal