(Natural News) A current affairs host at the Hong Kong bureau of The Epoch Times was recently threatened by police in mainland China who sent her the message: stop broadcasting programs, or face arrest under the new national security law.

Rachel Wong, host of the Hong Kong bureau of the Chinese-language Epoch Times’ Cantonese-language talk shows “Shi Shan’s Outlook” and “What’s Wrong,” said she believed she was targeted by the Chinese regime for exposing its crime of forced organ harvesting in a recent program.

Wong, who hosts daily shows on YouTube covering topics related to the Chinese regime, reported evidence of forced organ harvesting from prisoners of conscience in China on a program on March 12. Four days later, a family friend based in mainland China was contacted by local authorities.

In an exclusive interview with The Epoch Times’ affiliate NTDTV, Wong said she received a message from a relative on March 16, telling her a family friend was called in for questioning by public security officers in her hometown in mainland China.

The police threatened the friend to tell Wong “not to do [Epoch Times] programs anymore” under the current political climate.

They also said, “if the National Security Law is used against them [media staff] and targets them in the future, if her parents don’t have a daughter, it would be very sad, right?” according to Wong.

Last year, the Chinese Communist Party imposed a draconian national security law on Hong Kong, which punishes what Beijing deems as secession, subversion, terrorism, and collusion with foreign forces with a maximum penalty of life imprisonment. Since taking effect last July, the CCP has used the law used to drastically curtail freedoms in the city, arresting and charging dozens of pro-democracy figures for alleged violations of the legislation.

Many fear the national security law will further restrict press freedom in the city. With much of Hong Kong’s media adopting pro-Beijing stances, The Epoch Times is one of the few local media outlets that covers the CCP’s abuses in China, Hong Kong and abroad.

Wong suspects the recent harassment is the result of a program she hosted two weeks ago, exposing the CCP’s practice of killing imprisoned Falun Gong practitioners for their organs.

“It is the most in-depth episode exposing the CCP[’s crimes] since I have begun working in the media,” she said.

During the program, Wong played two audio recordings, including a recording of testimony from a police officer who was on duty at the scene of an organ harvesting operation in Liaoning Province. 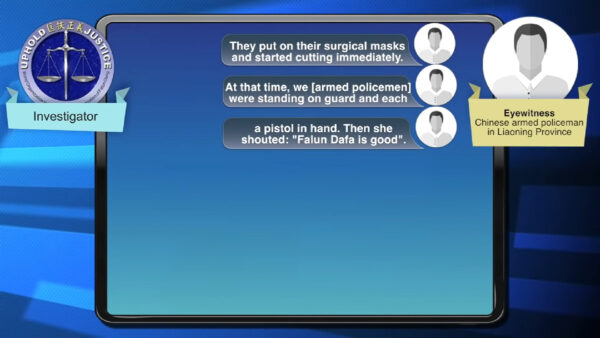 Transcript of the recording of an armed police’s testimony, who is on duty at the scene of an organ harvesting operation in Liaoning Province. (Screenshot from YouTube) 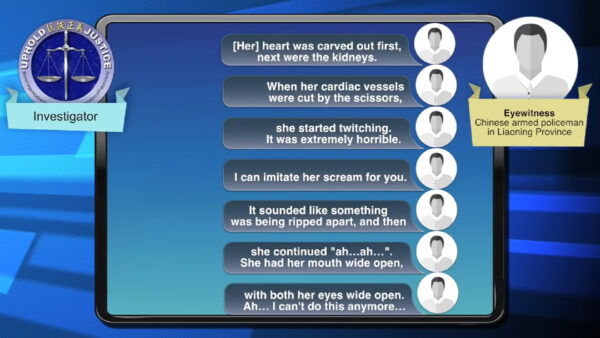 Transcript of the recording of an armed police’s testimony, who is on duty at the scene of an organ harvesting operation in Liaoning Province. (Screenshot from YouTube)

The other is of former Minister of Commerce Bo Xilai, admitting that former CCP leader Jiang Zemin had issued commands to kill Falun Gong adherents and sell their organs for profit.

The latter oral evidence was recorded from a phone call to Hotel Atlantic Kempinski Hamburg, where Bo stayed during a visit to Hamburg, Germany, accompanying then-Premier Wen Jiabao in September 2006.

Transcripts were published online by the World Organization to Investigate the Persecution of Falun Gong, a U.S.-based advocacy group, in 2016.

In 2019, an independent people’s tribunal found, after a yearlong investigation, that the CCP was harvesting the organs of prisoners of conscience—mainly Falun Gong practitioners—on a “significant scale.” Practitioners of Falun Gong, a spiritual practice, have been brutally persecuted by the Chinese regime for more than two decades. Millions of adherents have been imprisoned, and hundreds of thousands have been tortured, according to the Falun Dafa Information Center.

This is the third time Wong has received a threatening message from Chinese public security officials.

However, the host stressed that she would not be cowed.

“[The CCP] fears the most when it comes to its scandals, such as genocide, mass extermination, and live organ harvesting,” Wong said. “If you hide it away, or if you shut the voice down or take a step back, it’s actually more dangerous.”

Wong had a message for the CCP:  “Any threat or any action they make to me in the future, I will make it public. I do live shows every day, and I can say it every day.”

Read more at: TheEpochTimes.com and CommunistChina.news.