(Natural News) Attorney Lin Wood has released an interview with a whistleblower [pdf here] who operated for years within part of the apparatus connected to Deep State surveillance.  While the focus is upon the activity of Rod Rosenstein and even Mike Pence as it relates to the Trump administration, there is part of the interview that connects to a much deeper aspect.  The testimonial connects a larger story if you know what to extract.

While I am still reviewing the overall content, within the first few pages of the interview this segment jumps out – BIG TIME: 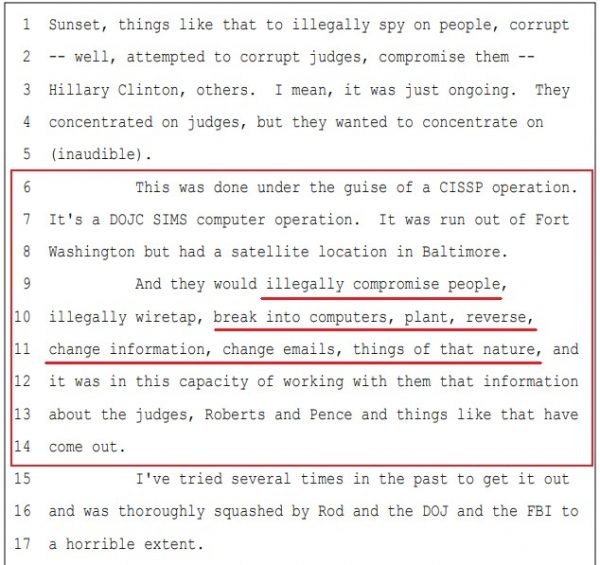 The whistle-blower is describing his activity in Baltimore, Maryland, while working with then U.S. Attorney Rod Rosenstein.  At first review this part seems attributed only to attest the validity of the whistle-blower himself.  However, read carefully what he just stated while reminding yourself of the issue encountered by former CBS reporter Sharyl Attkisson.

Most people have forgotten that Sharyl Attkisson’s story originated with some unknown entity planting “classified material” on her laptop, which she discovered and then independently had reviewed by forensic auditors.  Attkisson’s computer audit identified government intrusion into her computer system, which not coincidentally is exactly what the whistleblower is outlining in this segment of the testimonial.  Stay with me…

You might also remember that later on –early 2020- someone provided Attkisson with details and a tip about the intrusion.  That information then led to Ms. Attkisson refiling the lawsuit and, this is the important part…. Attkisson named Rod Rosenstein and Shawn Henry, a former FBI official in her follow-up lawsuit.  Shawn Henry was the former head of the FBI DC field office, who also became the head of Crowdstrike, a contracted intelligence gathering operation for the government and a politically connected data security and forensic company.

With the information from the Lin Wood whistle-blower, it appears the activity he is admitting to undertaking is in direct alignment with the computer intrusion and illegal compromise that Attkisson narrowly avoided.  All of the participants, and the identified corrupt activity, now merge.

The Lin Wood whistle-blower outlines how the Deep State was conducting electronic surveillance on political interests in order to compromise people.  Shawn Henry was the head of Crowstrike, a known FBI contractor with access to the NSA database as outlined in the 2016 admissions by NSA Director Admiral Mike Rogers.  The database was compromised by FBI contractors conducting political surveillance.

Both the Lin Wood whistle-blower and the tipster to Sharyl Attkisson are noting that Rod Rosenstein was one of the organizers of the operations from his role as U.S. Attorney in Maryland.  Now all of the compromises are pictured, and all of the motives behind all of these players starts to make a lot more sense.

Now overlay: (1) what we previously know about the NSA database exploits; and (2) Sharyl Attkisson’s computer intrusion:

A very interesting development appeared early in 2020 amid the ongoing effort of former CBS investigative journalist, Sharyl Attkisson, to resolve the issue of who spied on her, planted spyware and infiltrated her computer systems for illegal surveillance. [Attkisson website here]

According to a 2020 court filing [Source Here] a person who was engaged in the “wrongful activity” has come forward to provide Ms. Attkisson with details about the operation. As a result of those whistle-blower revelations Attkisson is able to name specific individuals who were running the operation: 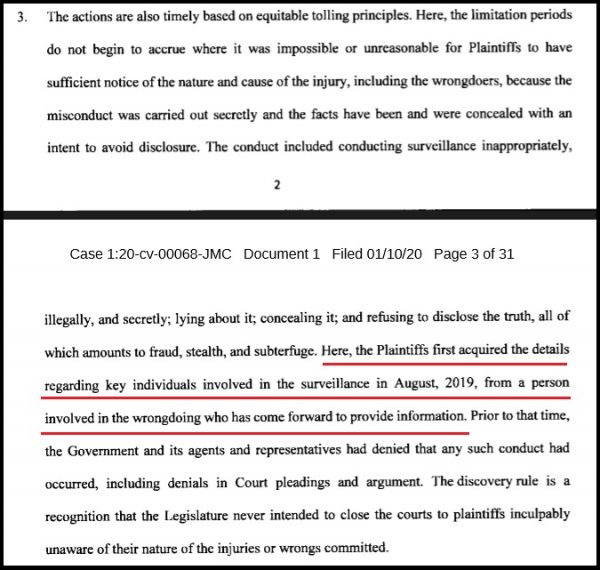 Former DOJ Deputy AG Rod Rosenstein is named as the person who was in charge of the operation; and the former head of the FBI DC field office, Shawn Henry is also outlined.

Mr. Henry is the head of Crowdstrike, a contractor for the government and a politically connected data security and forensic company. Those who have followed the aspects related to the FBI use of the NSA database to illegally monitor U.S. persons; and those who followed the DNC cover story of Russia “hacking”; will be familiar with Crowdstrike.

According to the updated lawsuit (full pdf below) Rod Rosenstein, as the U.S. Attorney for Maryland, was in charge of the Obama 2011 and 2012 operation to monitor journalists specific to Ms. Attkissons reporting on Fast-n-Furious and Benghazi. 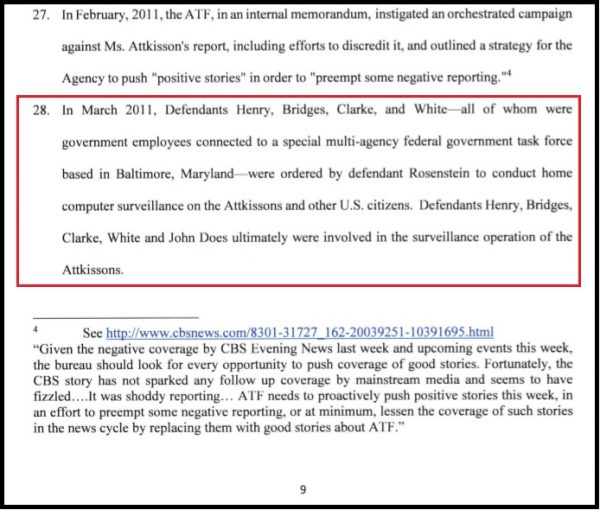 What I find additionally interesting is the overall timeline in the bigger picture.

In the April 2017 release from FISC Judge Rosemary Collyer outlining the abuses of the FISA-702 process by FBI “contractors”, where the NSA database was being use for unlawful surveillance of U.S. persons, Collyer specifically noted the findings of her review of the period from November ’16 to May ’17 (85% non compliant rate) was likely to have been happening since 2012. [Go Deep]

The “IRS Scandal” where the DOJ was creating a list of U.S. persons for political targeting, and requested CD ROM’s of tax filings, was the lead-up to the 2012 exploitation of the NSA database. [The Secret Research Project] So there’s a larger picture of government surveillance under the Obama administration that becomes more clear.

Political spying 1.0 was actually the weaponization of the IRS. This is where the term “Secret Research Project” originated as a description from the Obama team. It involved the U.S. Department of Justice under Eric Holder and the FBI under Robert Mueller. It never made sense why Eric Holder requested over 1 million tax records via CD ROM, until overlaying the timeline of the FISA abuse:

The IRS sent the FBI “21 disks constituting a 1.1 million page database of information from 501(c)(4) tax exempt organizations, to the Federal Bureau of Investigation.” The transaction occurred in October 2010 (link)

Why disks? Why send a stack of DISKS to the DOJ and FBI when there’s a pre-existing financial crimes unit within the IRS. All of the evidence within this sketchy operation came directly to the surface in early spring 2012.

When you overlay the new information from the Attkisson lawsuit, what emerges is the picture of an intentional effort by the Obama administration to weaponize the ability to collect electronic information on domestic political opposition. It’s one long continuum.

Read more at: TheConservativeTreehouse.com and Surveillance.news.