(Natural News) The recent baseless CNN attack on us is a fake news media hit job of epic proportions which lacks all journalistic ethics and impartiality. CNN’s attack demonstrates that it is not just questioning of the alleged safety of vaccines but “free speech itself.”

(Article by Ty and Charlene Bollinger republished from TheTruthAboutCancer.com)

What is indisputable (but not mentioned in CNN’s biased report) is that the COVID vaccines are being used under an Emergency Use Authorization (EUA) by the FDA. An EUA makes the vaccine available for “public health emergencies,” but also means that the FDA has not yet compiled all the evidence and clinical data that it would examine before fully approving a drug for public distribution and use. When combined with the Department of Health and Human Services (DHHS) Declaration of February 4, 2020 and the invocation of the PREP Act, the vaccine manufacturers are immune from legal liability (i.e., they cannot be sued for money damages in court) for losses relating to the administration or use of covered countermeasures (like vaccines) against COVID-19.

Despite over 500 reported deaths from the COVID vaccine (according to the CDC’s VAERS database), the CNN report insinuates that vaccines are undeniably “safe” while totally ignoring the indisputable $4.4 Billion paid out to Americans damaged by previous vaccinations – an amount paid by the DHHS itself! Congressman Adam Schiff once sponsored a House Resolution declaring that there have never been any deaths attributable to vaccinations. This is like claiming that the holocaust never happened –a repugnant and idiotic notion.

Along with thousands of cases of vaccine damage acknowledged by the US government, scientific research clearly indicates that there are legitimate concerns about the safety of vaccines on the CDC schedule, since most vaccines include adjuvants that can cause neurological damage, according to peer-reviewed scientific literature and Material Safety Data Sheets.

CNN’s attempts to depict us as “profiteers” running an “empire” is yet another dishonest and deceitful attack. We are extraordinarily proud of the work we have done in our documentary films – The Truth About Cancer and The Truth About Vaccines. And while we have generated income from our documentary films, we find nothing wrong with making a living. What CNN’s “hatchet job” failed to mention was the fact that over the past six years, we have donated over $250K to charities that help people with cancer and vaccine damage, and we also have personally funded events to bring awareness to health freedom and the legitimacy of questioning the safety of vaccines.

And while brazenly disparaging us for selling products, in true “fake news” form, the CNN report failed to mention the record profits made by the vaccine manufacturing pharmaceutical giants in 2020, with the top 10 companies accumulating profits in excess of $400 billion.

Not surprisingly, they also failed to mention that the four companies that make all 72 of our vaccines (Merck, Pfizer, Sanofi, and Glaxo) are four of the most corrupt companies in the world. They are serial felons, and have paid $35 billion the last 10 years for falsifying science, for defrauding regulators, for lying to doctors, and for selling drugs that they knew were poisonous and knew were going to kill people, but still acquired FDA approval and took to market. Even the FDA admits, on its own website, that over 106K Americans die each year from “adverse drug reactions” to pharmaceuticals which are “FDA approved” and properly prescribed and used.

That we would sponsor an event on January 6th, a day when many conservatives, Republicans, Libertarians, Christians and other free thinkers were in Washington, DC, is only logical. These are the Americans who, un-brainwashed by the mainstream media and outlets like CNN, will honestly examine the scientific research regarding vaccines.

The CNN piece ridiculed and mocked us for our religion – this is not only elitist but also beneath contempt. The senseless acts of violence inside the Capitol on January 6th were committed by misguided individuals, and we had nothing to do with promoting or inciting violence. Those who were engaged in the illegal and politically senseless acts should be punished, however a broad-based smear of anyone who asked legitimate questions about the integrity of the vote in the 2020 elections and asserting that they are somehow responsible or connected to these unlawful acts is despicable and appalling. It’s the new McCarthyism.

The report also insinuated that Charlene was somehow responsible for inciting violence at the Capitol, which is patently absurd. She had no way of knowing that anyone was being violent or destroying anything at the Capitol, nor did she utter a single word that could be construed as “inciting” violence. We were there peacefully protesting the abuse of power from very corrupt politicians and fighting for freedom of both our health, for our children, and for their future. We have never and will never advocate violence.

As a Presidential candidate, Donald Trump, who was then friendly with Robert F. Kennedy Jr. (RFK), seemed quite open-minded to discuss the topic of vaccine safety. For some inexplicable reason, the President’s curiosity ended once he was elected and he never appointed the Commission, which he had previously asked RFK to chair during the campaign. We were hopeful that in a 2nd term, President Trump would have more liberty and be less susceptible to the powerful Big Pharma lobby in Washington DC, as well as Pharma’s “in house” advocate – Vice President Mike Pence – whose entire political career was essentially funded by Indiana based Big Pharma.

That CNN’s attack on us was a “hatchet job” is demonstrated by the fact that CNN never contacted us directly before their vicious and malicious “hit piece” was scheduled to be aired. Instead, they sent an email to our customer service department a mere 24 hours before the piece went live, yet they had our mailing address the entire time. They even sent us a physical letter (image above) asking for comment, but we didn’t receive it until 2 days after the report had aired. Obviously, CNN had no real desire to give us a “fair shake,” they just wanted to be able to conclude their ludicrous report and state “Despite multiple attempts, the Bollingers refused comment.” 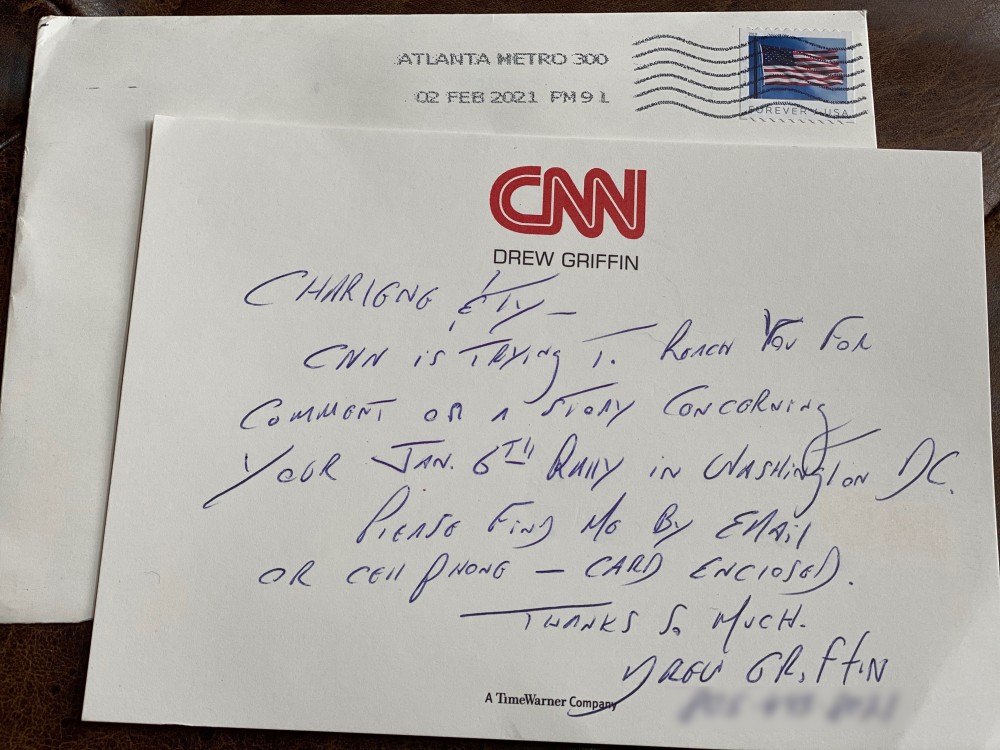 Lastly, the coup de grâce! If there were still any doubt that CNN lacks all ethics and common courtesy, CNN’s so-called “reporter” Drew Griffin had the unbelievable audacity to pull up Google maps and show actual photos of our personal residence, while he shared details about our home and where we live. Clearly, Drew is not a “journalist” and has less regard for the truth than a pathological liar.

Bottom line: CNN is fake news. They should be ashamed.

Previous :Data expert: ‘We can prove’ 2020 election fraud ‘fairly conclusively’
Next : MUST READ: Democrats were ONLY able to “win” in 2020 by breaking chain of custody laws in EVERY SWING STATE
Receive Our Free Email Newsletter