MUST WATCH: Viral video emerges of Joe Biden admitting they know how to manipulate voting machines

Even Joe Biden and several liberal Democratic political leaders have called for the standardization and increased security of voting machines, like Dominion, plus the use of paper ballots…just take a look back to 2007.

With the deep state allegedly achieving their goal of replacing Donald J. Trump from the Oval Office, they are now using big tech and leftist media networks to prevent Trump’s campaign from pursuing data from the electronic voting machines and demanding signature verifications on physical ballots.

Against Democrats’ wishes, a forensic report by Allied Security Operations Group on the vote in Antrim County, Mich., found that  “the Dominion Voting System is intentionally and purposefully designed with inherent errors to create systemic fraud and influence election results” and “the results of the Antrim County 2020 election are not certifiable.” was released to the public.

While this finding was disputed by Dominion’s CEO John Poulos, there are many reports of voter fraud in battleground states, backed up by witness affidavits and statistical analyses.

Now, a viral video is circulating of Joe Biden sharing his concerns about election integrity.

In this one, from 2007, Biden was so concerned about election integrity that he called for election reform mandating paper ballots and standardizing voting machines.

"How are you gonna keep it from us being able to be in a position where you can manipulate the machines, manipulate the records?… I think we should pass a federal law mandating that the same machines with paper trails be mandatory for every federal election"

Joe Biden believed back then that elections could be stolen with electronic voting machines. But as evidence of voting irregularities in the 2020 election mounts, we’re being sold the idea that everything was above board. “We the people voted. Faith in our institutions held,” Joe Biden declared after the official voting of the Electoral College. “The integrity of our elections remains intact.”

Which is what people usually mean by election reform. How are you gonna keep it from us being able to be in a position where you can manipulate the machines, manipulate the records? I think we should pass a federal law mandating that the same machines with paper trails be mandatory for every federal election,”

“We can’t mandate state elections,” Biden continued. “So in a nutshell I think we should be mandating that we have a paper ballot with a standardized machine, standardized requirement.”

Just a year ago, several US Senators were publicly expressing concern about the electronic voting machines. Here is a press release from Elizbeth Warren’s office, December 10, 2019. 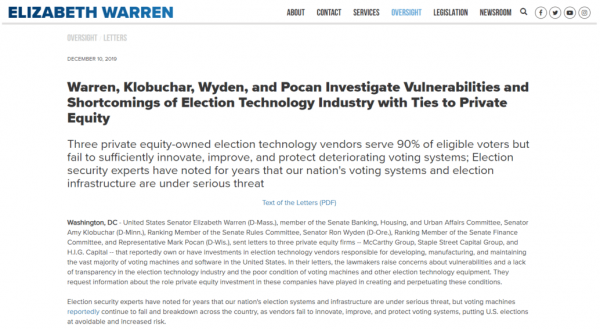 “Washington, DC – United States Senator Elizabeth Warren (D-Mass.), member of the Senate Banking, Housing, and Urban Affairs Committee, Senator Amy Klobuchar (D-Minn.), Ranking Member of the Senate Rules Committee, Senator Ron Wyden (D-Ore.), Ranking Member of the Senate Finance Committee, and Representative Mark Pocan (D-Wis.), sent letters to three private equity firms — McCarthy Group, Staple Street Capital Group, and H.I.G. Capital — that reportedly own or have investments in election technology vendors responsible for developing, manufacturing, and maintaining the vast majority of voting machines and software in the United States. In their letters, the lawmakers raise concerns about vulnerabilities and a lack of transparency in the election technology industry and the poor condition of voting machines and other election technology equipment. They request information about the role private equity investment in these companies have played in creating and perpetuating these conditions.”

28 times media and Democrats excused or endorsed violence committed by left-wing activists
Here comes persecution
Democrats immediately move for a police state
Pence presents coronavirus report to Biden, warns new administration to hold China accountable for pandemic
EVIL: Democrats changed house rules so they could smear President Trump repeatedly during impeachment sham as a racist and “White Supremacist-in-Chief”
Here’s a hint they were left-wing radicals: They both wore the same style of costume
The left-wing “hate” media and Democrats created a MONSTER, and now the radicalized, terroristic Left is turning against Biden’s governmental regime
The next two years will be the Democratic Party at its most transparent
BREAKING: Antifa is so happy about Biden they bust up DNC building in Portland and fight with cops
America up in flames like Democrat-run cities across America is the left’s goal for Joe Biden’s presidency