(Natural News) Congress is likely to pass the big COVID “relief” bill like the world’s second-largest kidney stone. My colleague Victoria Taft already highlighted some of the most egregious spending included in the bill, such as the horseracing regulations and the new cars for HIV/AIDS workers overseas. That one’s worth more than $193 million, begging the question of just how many restaurants, movie theaters, and other small businesses in these United States might have been helped with that money.

In addition to the $10 million for gender programs in Pakistan and the lavish spending on receptions that Victoria noted, there’s more.

The bill is packed with…salmon? 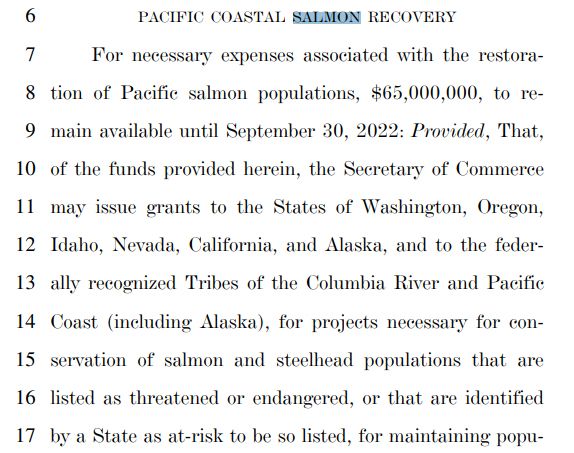 Did anyone read this bill? Does any single person know everything that’s in it?

Scroll through the 5,593 page bill — more than twice as long as the original Affordable Care Act, aka Obamacare — and you’ll see millions by the tens and hundreds going to federal agencies. The Department of Justice alone receives hundreds of millions of dollars for various sections of the agency. Many federal agencies get hundreds of millions, despite the fact that they don’t need relief, they need downsizing.

You had a better chance of getting a meaningful amount of money if you were a Sudanese official than if you’re an American citizen. About $700,000,000 in the bill goes to the government of Sudan, evidently to help preserve that government and as part of its peace deal with Israel. The latter is certainly unobjectionable on its own, but wedging it into the so-called COVID relief bill raises questions.

Our nation’s capital is getting a couple of new museums as part of the COVID “relief” bill. 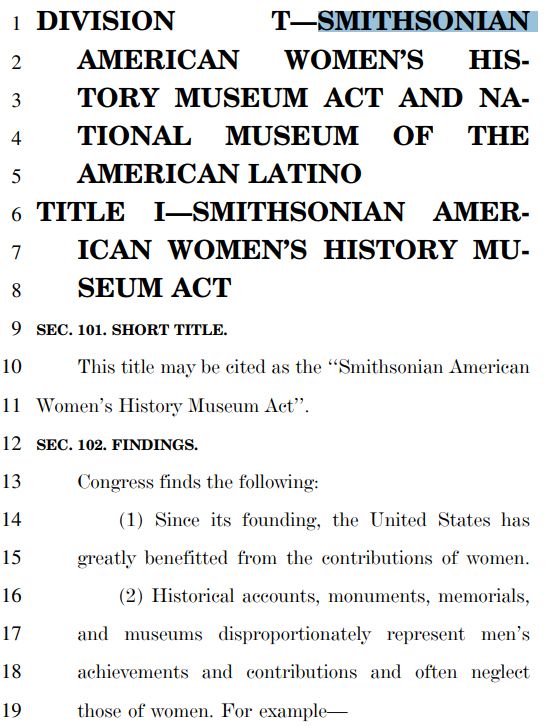 They just had to work a little divisive dig in there — in the so-called COVID relief bill. Odds that the museums’ first contract will be with critical race theory instructional firms?

It’s worth noting that the federal workforce has not missed a paycheck since the pandemic struck. Tens of millions of Americans have missed multiple paychecks. Some have even gone many months on end without paychecks as their businesses have faced lengthy shutdowns. The gig economy, which includes musicians and venues as well as Uber drivers and the like, has been smashed by restaurant and venue closures. The bill includes relief for live music venues — along with the giant stacks of money for federal workers who haven’t missed a paycheck and are all but impossible to fire.

Senators and their staffs haven’t missed a paycheck either, but it was important to get their daycare expenses taken care of.

Congress is setting aside money in its COVID-19 stimulus program to pay the added pandemic expenses inside its own US Senate daycare center pic.twitter.com/mQieVPpLuH

It was important, Mr. and Mrs. Laid-Off American, that we get diversity in the intelligence community as part of your COVID relief.

The icing on all this is that Pelosi held it up beyond the election for purely political reasons. She let millions suffer so she could make sure her vote for president counted for more than yours.

How did we get to this point, where the nation faces the emergency of a lifetime (if you can believe many in the government), yet those same people in the government seem to be doing whatever they can to take advantage, impose their politics, and make the crisis worse? It suggests that some, such as Pelosi, are too confident in the knowledge that whatever they do to the voters in flyover country, whatever nonsense they pack into a “relief” bill that our great-grandchildren will be paying for if there is a United States at that point, their own voters will never feel enough disgust to turn them out of office as they deserve.