(Natural News) The White House (or so they believe) and are now ready to get rid of him.  Having a criminal son may be just what the Obama/Harris camp needs to make that happen. And if there’s any doubt about this theory, an article in The New York Times seems to lay it to rest.

We conservatives remember how, in October, the media and the tech tyrants conspired to block any reports about Hunter Biden, whether those reports were the Senate Intelligence Committee’s findings about the $3.5 million Hunter received from the wife of a Russian politician, or the shocking details of political corruption, drug addiction, and sexual debauchery contained on his hard drive.

Well, to ordinary people, these stories were shocking.  To the media and the tech tyrants, these stories were potential dangers to Joe Biden’s candidacy.  They had to be stopped — and stopped they were.  Twitter and Facebook, the two biggest social media tech tyrants, refused to allow any reports to circulate and banned people, including President Trump’s press secretary, from their platforms when they refused to bow down to this censorship.

News outlets derided the reports about the Biden family’s corrupt dealings, all of which implicated Joe Biden as the man who pimped out his addled son for huge sums of money, as non-stories.  That’s not an exaggeration.  It’s explicitly what NPR’s public editor said: 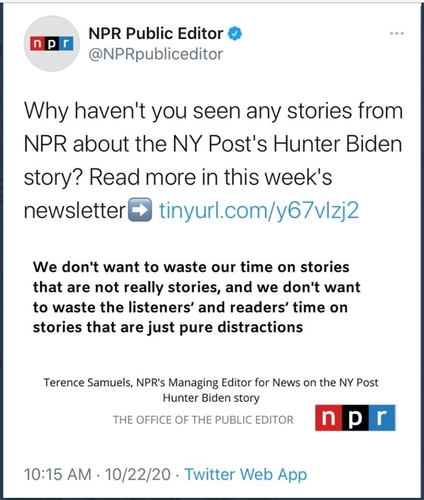 Likewise, CNN’s Christiane Amanpour, who’s served as a shill for every tyrannical regime on Earth, insisted that, because she is a real “journalist,” it is not her job to investigate stories.  Instead, it was only her job to determine whether the results of other people’s investigations met her standards.  The Hunter Biden story did not:

Of all the media deceit and propagndizing disseminated in the lead-up to the election to justify their refusal to report on the Hunter Biden documents — despite knowing they were genuine and not from Russia — this on CNN from @camanpour may be the most amazing: pic.twitter.com/mkI4Jtd4SN

When President Trump tried to bring the story to Americans’ attention during the first presidential debate, Biden snapped back that it was Russian disinformation, a lie that the media and tech tyrants enthusiastically disseminated:

Turns out, Hunter's business dealings with China had been under investigation since 2018.

Suddenly, though, the media are releasing information about the criminal investigations into Hunter Biden and Joe’s brother, James Biden.  As the above tweet notes, these investigations have been ongoing for years.  We also know that a sizable number of voters would have passed over Biden for Trump had they known about Biden family corruption.  So what gives?  Why are Hunter and, by extension, Joe himself suddenly fair game?

It could be that bad things are about to come down from the FBI.  After all, Trump did promise that “a lot of big things” will happen soon.  The sudden flurry of reports about the Bidens could just be the Democrats’ way of getting ahead of the story so that, if Hunter is shown doing the perp walk, they can say it’s “old news.”

Read more at: AmericanThinker.com and JoeBiden.news.