What’s happening now in Marxist/Communist South Africa is a dire warning of what’s coming to America as leftists, liars, looters and loonies run country into the ground

(Natural News) Dr. Christiaan Barnard a South African heart surgeon surprised, shocked, and almost staggered the world in December 3, 1967 when he performed the first human heart transplant. The rest is history in the world of medicine and in the world of politics.

What has happened to the once great nation where heart transplants originated?

The unskilled, uneducated, unsophisticated, and unprincipled leaders in the South African government have turned a great nation into a nightmare. I don’t mean to be unkind but graphic and to the point: thieves and idiots (or thieving idiots) are running and robbing and ravaging South Africa.

Highly trained and experienced engineers and other professionals have fled to other nations for better jobs and possible promotions. Unqualified Blacks have stepped into complicated positions and have made everything worse.

The South African Broadcasting Corporation (SABC), South African Airways PRASA, the Passenger Rail Agency of South Africa, and Eskom, the national power system, are riddled with scandal and all are facing bankruptcy. 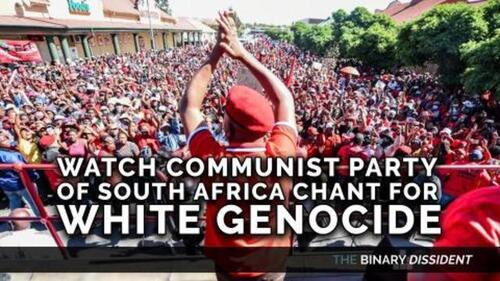 Lindsay Maasdorp is a racial looney and the Black Land First (BLF) spokesperson did not help the racial divide when he stated his views that he would support a rapist as long as the victim was white and the rapist was black. His party believes that all white people in South Africa are criminals by virtue of their existence.

ABC News reported that General Kehla Sithole declared, “White people brought crime to South Africa, they brought things they know we would be tempted to steal, just to make us look bad.” Sure they did. Whitey again. Sithole told 500 police officers in Pretoria “if it wasn’t for white people, there would be no crime in South Africa.”

All the official crime reports are clear that the great majority of rapes, robberies, and slaughters are black on black and black on white.

A Member of Parliament said, “Not all that visit our beautiful country come with the right intention, as they did 2,000 years ago by the person named van Riebeeck. He overstayed.” No, Jan van Riebeeck went to Africa in 1652, stayed about ten years, and “founded (1652) Cape Town and thus opened Southern Africa for white settlement.” It was not 2,000 years ago but less than 400 years ago. It seems most ANC members have trouble with numbers but they sure know how much cash to expect in bribes.

Other race loonies made an unnecessary problem for the nation when health officials advertised for 100 new doctors; however, Whites need not apply because they would not be considered because officials “aimed to fill the new posts with only black candidates.” Health officials, trying not to appear to be the racists they obviously were, said the move was “implemented to redress the country’s historical racial imbalance of Apartheid that saw most high-ranking positions filed (sic) by white doctors.”

The sick and dying don’t give a flip about apartheid, racial quotas, or whether their health care person is black, white, or polka dot. They just want a doctor.

There are political loonies, such as President Cyril Ramaphosa, who “assured ANC volunteers” that the ruling ANC is going to seize white land without any compensation. They also admitted that “90 percent of all black-seized farms have failed and lie fallow.”

South Africa cannot feed its own people so food must be imported; yet these loonies are taking farms from successful white farmers and giving them to Blacks who have no conception of farming. So, the confiscated farms (now black owned) are overgrown with weeds, modern equipment is rusting in the fields, and all animals have been killed or sold.

The leader of the extreme left wing party known as Economic Freedom Fighters (EFF), Julius Malema said, “There’s no system that has worked successfully for Africans, except the Zimbabwean system.” Of course, everyone in the most remote village in Africa knows about the Zimbabwean nightmare.

Read more at: AllNewsPipeline.com and Communism.news