As the Million MAGA March for Stop the Steal was ending today in D.C., leftist counter-protesters decided to attack older individuals and women after the majority of people had left.

You want a picture of the divide in America right now? You want to have a visual to show people the difference between what a Biden vote gets you versus a Trump vote? This is it. Forget the media. Forget the congressional battles. I don’t care what Pelosi or AOC says right now. Let’s forget them entirely for the moment.

Andy Ngo – the reporter who has been dealing with Antifa for years in Portland – assembled THIS visual of the paths before us, America:

BLM rioter rushes in and punches a woman in the back of the head as she’s walking away. #MillionMAGAMarch pic.twitter.com/1lrfD4MLxW

A family with children are in tears as they are followed and harassed by antifa. #MillionMAGAMarch pic.twitter.com/Kb8f2sJ1e5

Graphic: A close-up angle of BLM rioters knocking a man unconscious who was leaving the #MillionMAGAMarch in DC earlier today. They also steal his phone when he’s on the ground. Video by @FromKalen. pic.twitter.com/cf7bnkpsCf

A older Trump supporter on a bicycle was knocked down and had liquid dumped on him by BLM-antifa rioters in DC. pic.twitter.com/juPwidaO8y

BLM-antifa rioters hurl projectiles and an explosive at people having dinner after the #MillionMAGAMarch in DC. pic.twitter.com/syDM7YQFrS

Young couple in DC followed by crowd of BLM-antifa thugs who hit them and throw liquid on them. #MillionMAGAMarch pic.twitter.com/Lqo4evvviK

This isn’t even HALF the violent encounters that were recorded.

Of course, the media won‘t report on this. Instead, they‘ll talk about how most Trump supporters weren’t wearing masks. They’ll show a few clips where the Proud Boys and others finally started punching back, editing things to make it look like the Antifa terrorists are the victims. That is, of course, if they cover the massive rally AT ALL.

POTUS was ticked as heck by the violence: 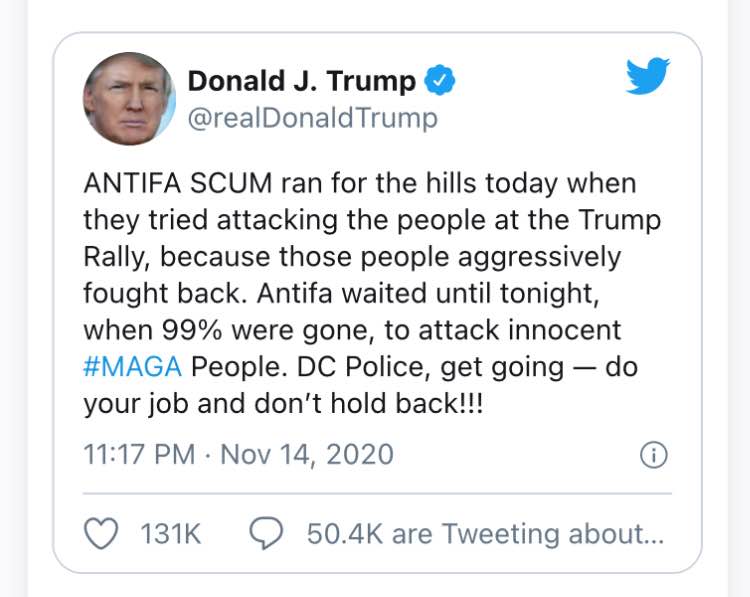 You want to know how most Trump supporters reacted? With displays like this show of support for our brave police officers and singing the national anthem:

The Trump Law and Order flag is brought over Black Lives Matter Plaza as supporters cheer on the police here in DC #MillionMAGAMarch #DC #MarchForTrump pic.twitter.com/1t4g3UrL3g

There was a lot of violence today against attendees of the #MillionMAGAMarch. Now, a large crowd sings the American national anthem outside the Willard Hotel in DC. Video by @BGOnTheScene: pic.twitter.com/kq8PDv7Xfq

In case you didn’t get the message in all this, here it is in black and white:

Read more at: NotTheBee.com and AntifaWatch.news.

Previous :‘It’s about to go kinetic, most likely within the next 70 days’: Expect insane, left wing radicals to explode with rage if Democrat voting fraud hands the election to President Trump
Next : WATCH: Ted Cruz eviscerates Jack Dorsey over whether Twitter is a ‘publisher’
Receive Our Free Email Newsletter