The standards set by Stalin, Mao and Alinsky are the agenda for Democrats and the domestic terrorists they support in 2020

(Natural News) Once again, celebrities and others are injecting their idiocy into the current protests over the death of George Floyd. Patton Oswalt, an unknown actor to most, has again defended the progressive socialist group Antifa with the D-Day landing. Much like CNN made the point during the attacks in Portland and Berkeley. Virtue-signaling leftists have ignored the terrorists in this group, the damage done to small businesses, and many minorities in their effort to place the blame on President Trump.

As shown numerous times in the past, and as playing out today on the streets of our weak progressive cities, Antifa wants nothing more than collapse the system of laws and regulations that keep our country safe. Antifa believes that using violence to intimidate others in furtherance of the ideological goals that only they believe in is the way to move forward. The black bloc, dressed in all black, has been shown to have assaulted conservatives or anyone else that does not meet the standards they have set for our country. The Standards that have been set by the protocols of Stalin and Mao, with some Saul Alinsky thrown in as well, are the agenda for these terrorists.

Antifa, Black Lives Matter, and others exploiting this situation are nothing more than spoiled children playing at domestic terrorism. Hidden behind masks, they are willing to ambush anyone who wants to debate the ideology that they have turned into a religion to advance their violent extremist agenda.

Antifa is nothing more than an anarchist led socialist-style movement that looks to overthrow our system of government. It is not an organization but more of a coalition of progressive socialists who pattern their agenda on the Nazi propaganda and methods. The sycophants for Antifa and other leftist progressive groups in the media are much the same as the propaganda put out during the formation of the National Socialist party in 1930, Germany. As the Nazis had the Jews to blame for all the challenges that Germany faced at the time, today those being maligned are conservative whites, or anyone else that opposes the fascism that they claim to be fighting against. You cannot call yourself ANTIFA and then use fascist tactics to try to force your beliefs on others.

When the progressive socialists in our Congress continue to lie about the damage being done to our country, the American people see through the lies. Virginia Democrat Tim Kaine even uses talking points straight out of Lenin’s playbook to declare that terror in the streets is justified. Kaine’s son Woody was arrested at the Minnesota capitol in an assault planned and carried out by an Antifa group. 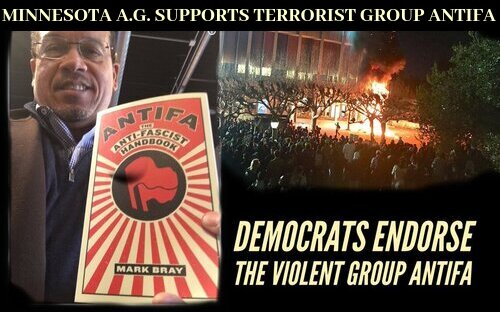 An explanation is needed when those in our government like Keith Ellison, the Minnesota AG attempts to blame “white supremacists” for the looting and burning of buildings. This man is an Antifa sympathizer who posted a Twitter feed in January 2018, showing him holding a copy of the Antifa handbook and claiming it “scared Trump.”


Or what of the Mayor of Minneapolis Jacob Frey that evacuated the Third Precinct and allowed it to burn, precipitating the spread of further damage. Once again, the progressive socialists do not consider the everyday man who has worked hard, sweated, and slowly move forward to be able to put food on the family table and pay the bills through ownership of a business they worked long hours and sacrificed to keep going. Of course, none of these leftists care about those people. They don’t need to. Most of these who feel they can lecture those of us who work for a living have always been in a world of plenty. They have never known challenges when it comes to living a day to day life where they have to work for what they need.

Celebrities are part of the resistance as well. Self-righteous snowflakes like Chrissy Teigen, Justin Timberlake, and others are pushing all their progressive socialist comrades to funnel money to help bail out what they call protesters, and ordinary citizens call looters to get out of jail. It shows just far out of touch with the reality of everyday living that the middle-class work through they have become.
Something has gone terribly wrong when rich celebrities has-beens all feel they are so far above the peasants that they can lecture us about our way of life. We have celebrities all over the liberal bastions in this country giving, and telling us to give to bail money to bail out the “protesters” that have destroyed the property of those just trying to make a living and far from the gated mansions and their private security.

Previous :Vandalism is POP now: Popular Mechanics under fire for science-friendly advice on ‘how to topple statues’…
Next : Conservative clergy of color rips Google over ‘deliberate censorship’ of Conservatives
Receive Our Free Email Newsletter

The standards set by Stalin, Mao and Alinsky are the agenda for Democrats and the domestic terrorists they support in 2020