(Natural News) US Secretary of State Mike Pompeo railed against China again over its early failures and coverup of the COVID-19 outbreak, and criticized World Health Organization Director-General Tedros Adhanom for his “unusually close” ties to Beijing which predate the pandemic.

Speaking with reporters on Wednesday, Pompeo said that “The Chinese communist party’s response to the COVID-19 outbreak in Wuhan have accelerated our more realistic understanding of communist China. The party chose to destroy live virus samples instead of sharing, or asking us to help secure them.”

“The Chinese communist party chose to threaten Australia with economic retribution for the simple act of asking for an independent inquiry into the origins of the virus,” Pompeo continued, adding “That’s not right.” 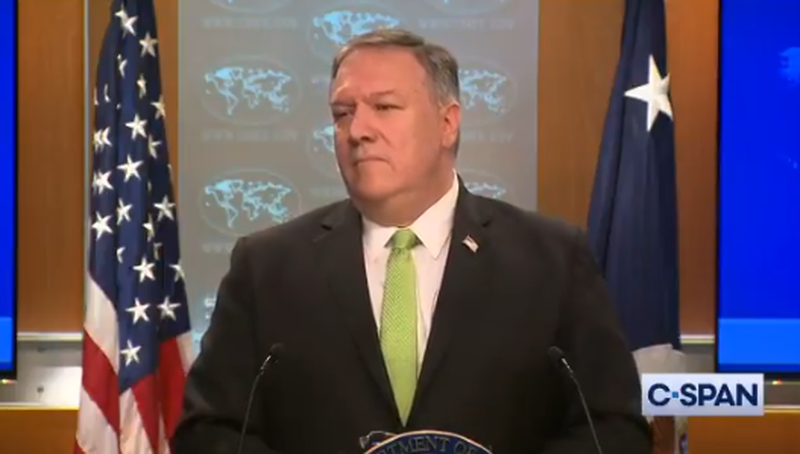 “We stand with Australia and the more than 120 nations who have taken up the American goal for an inquiry into the origins of the virus so we can understand what went wrong, and save lives now and in the future.”

Pompeo then turned his attention to WHO director Tedros Adhanom, who he says was pressured by China into excluding Taiwan from the World Health Assembly in Geneva.

“I understand that Dr. Tedros’ unusually close ties to Beijing started long before this pandemic, and that’s deeply troubling.”

POMPEO: "The media’s focus on the current pandemic risks missing the bigger picture of the challenges presented by the Chinese Community Party.”

On Wednesday, President Trump tweeted that China’s “incompetence” was responsible for “this mass Worldwide killing!”

Some wacko in China just released a statement blaming everybody other than China for the Virus which has now killed hundreds of thousands of people. Please explain to this dope that it was the “incompetence of China”, and nothing else, that did this mass Worldwide killing!

Pompeo also slammed Democrats for investigating him after he recommended the firing of State Department Inspector General Steve Linick.

“This is all coming through the office of Senator Menendez,” said Pompeo, adding “I don’t get my ethics guidance from a man who was criminally prosecuted.”

Menendez (D-NJ) was indicted in 2015 for his alleged role in a bribery scheme in which he accepted gifts from a Florida ophthalmologist in exchange for using his office to benefit the physician’s financial and personal interest. The DOJ eventually dropped the case against Menendez and the charges were dismissed in 2018.

Pompeo added that he should have recommended Linick’s firing “some time ago,” and denied that it was in retaliation for reportedly investigating him.

“There are claims that this was for retaliation for some investigation that the inspector general’s office here was engaged in. Patently false,” said Pompeo.

“I couldn’t possibly have retaliated for all the things — I’ve seen the various stories that someone was walking my dog to sell arms to my dry cleaner,” he added. “I mean, it’s just crazy. It’s all it’s all it’s all crazy stuff.”

.@SecPompeo: "I recommended to the president that Steve Linick be terminated. Frankly, should have done it some time ago…I don't talk about personnel matters. I don't leak to you all…there are claims that this was for retaliation…it's patently false…it's all crazy stuff." pic.twitter.com/jpphNyF2c7

Trump said in a letter to House Speaker Nancy Pelosi, D-Calif., on Friday night that he lost “confidence” in the watchdog, without providing further explanation.

Pompeo also did not provide a more detailed explanation for the firing when asked at the briefing.

“The president has a unilateral right to choose who he wants to be his inspector general at every agency in the federal government,” Pompeo said. Some Republicans, including Iowa Sen. Chuck Grassley, have said that a lack of confidence is an insufficient explanation for firing the inspector general. –CNBC

According to House Foreign Affairs Committee Chairman Eliot Engel (D-NY), Linick had opened an investigation into alleged wrongdoing by Pompeo – who a Democratic aide told NBC may have misused “a political appointee at the Department to perform personal tasks for himself and Mrs. Pompeo,” which included walking his dog, picking up dry cleaning and making dinner reservations.

Coronavirus pandemic linked to increase in “anger and confrontation” among family and friends
South Sudan confirms new outbreak of vaccine-related polio
VACCINES KILL: Study finds positive correlation between COVID-19 deaths, flu vaccination rates in elderly worldwide
Fauci and Biden together: A scientific dictatorship
FDA trying to establish new drug-like approval system for dietary supplements that could eliminate tens of thousands of them
EWG analysis reveals 800,000 residents in Kentucky are exposed to TOXIC “forever chemicals” in their drinking water
Trump administration releases plan to allow Medicare to cover cost of coronavirus vaccination
United Airlines preparing to segregate passengers who do not submit to rapid covid-19 testing
Living in a microwave: How dangerous is it to live near a cell site?
Top 5 Ways to HEIGHTEN your chances of catching Covid-19