The dead bodies are starting to pile up in America as New York, Hawaii and North Carolina beg FEMA for “Disaster Mortuary Operational Response Teams” (DMORT)

(Natural News) America is about to be flooded with dead bodies from the coronavirus epidemic that’s now burning its away across the nation. With over 68,000 confirmed infections and over 1,000 confirmed deaths already in America, the nation is on track to see at least 100,000 coronavirus deaths in the coming months.

NYC Mayor Bill De Blasio is now warning that half of all New Yorkers — around 4 million people — will become infected with the Wuhan coronavirus, according to the NY Post. As merely a 2% case fatality rate, that will result in an estimated 80,000 deaths in NYC alone.

His health commissioner, Dr. Oxiris Barbot, said the percentage could be even worse by the fall.

“We think 50 percent by the end of this epidemic, this pandemic, so by the time September rolls around likely 50 percent, but it could also be much higher,” Dr. Barbot said at the briefing.

The city’s hospital system is nearing its breaking point.

In case anyone was still under the illusion that the coronavirus wouldn’t kill anyone in America, here’s the explosive “death curve” showing the rapid acceleration of daily deaths in the USA (which reached 225 deaths over the last 24 hours): 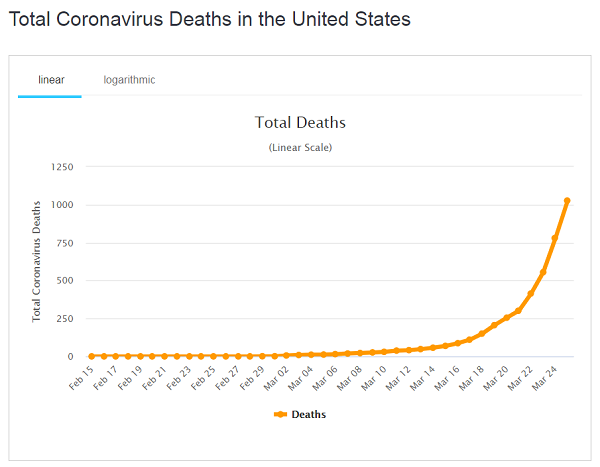 As a point of reference, my original pandemic projection model (revision 1) had predicted 1,000 deaths by April 10th. That means it was overly optimistic. But if you recalibrate the projected dates to the 225 deaths reported today, it means we will be seeing 400 deaths per day exactly one week from now. And in two weeks, there will be over 700 deaths per day in the USA, according to the model.

New York, North Carolina and Hawaii are begging FEMA for help disposing of all the bodies

At the same time NYC is expecting tens of thousands of deaths from the coronavirus over the next several months, three US states are now requesting “emergency mortuary assistance” from FEMA in order to deal with all the dead bodies.

Those states are New York, North Carolina and Hawaii. Curiously, Hawaii is currently reporting only 95 infections and 1 death due to the coronavirus, which almost certainly means Hawaii isn’t doing much testing.

New York, Hawaii and North Carolina have requested emergency mortuary assistance from FEMA to handle the coming deaths expected from coronavirus as the pandemic bears down on the United States.

The requests are for HHS Disaster Mortuary Operational Response Teams, or DMORT, which “work to quickly and accurately identify victims and support local mortuary services,” according to a government website.

Politico reported Wednesday that the Department of Homeland Security had been briefed that New York City’s morgues were nearing capacity, citing a DHS official and another source familiar with the matter. The New York Post reported on Tuesday that a makeshift morgue was being set up at Bellevue Hospital in Manhattan, citing a source who was familiar with the operation.

In other words, New York is rapidly running out of places to put all the dead bodies.

This never happens with “just the flu,” of course. That’s because the coronavirus is far deadlier than the regular flu, even if “pandemic denialists” / #covidiots haven’t yet been able to accept that irrefutable fact.

We’ve also learned that refrigeration trucks are being ordered in large quantities from US manufacturers to assist with the transportation of dead bodies. It won’t be long before the US will need to crank up mobile cremation ovens to start disposing of all the bodies of victims, just like we saw in China.

This outbreak has only just begun in the USA, by the way. We haven’t even seen 1% of where this is headed. It won’t be long before the USA is the coronavirus epicenter of the world, dwarfing all the numbers posted by China, Asia and all European countries combined.

It now looks mathematically impossible to see fewer than 100,000 deaths in the USA by the time this is all over. The real question is whether we can keep the total deaths below one million.

If you want to live, read Pandemic.news.

Previous :They WANT it to spread: Kaiser Permanente theatens to FIRE nurses for wearing N95 masks while treating coronavirus patients
Next : The grasshoppers are swarming mad that you are prepared for the crash, by Brandon Smith
Receive Our Free Email Newsletter

Pfizer CEO aggressively pimping FOURTH booster shot, proving it was always going to be a SERIES of shots that didn’t stop covid
Omicron variant spreading faster in highly vaccinated states like New York and New Jersey
COVID-19 patients should know they have the right to REFUSE treatment with remdesivir
Canadian province gives businesses the “option” to ban unvaccinated from getting groceries
Why don’t people “trust the science?” Because scientists are often caught lying
CDC just warned that 15,000 Americans will die EACH WEEK by Christmas; but it’s actually VACCINE DEATHS that are accelerating just as independent doctors told us all along
Even the NYT admits covid infections in children are merely like a “mild flu” – so why the vaccines, then?
Vaccinated people have 600% higher risk of covid infection compared to those with natural immunity
Leading scientists, doctors, policy experts say follow the science and halt COVID-19 mass vaccinations
Florida surgeon general supports commonsense COVID prevention strategies such as vitamin D and superfoods