The Lancet: Global case fatality rate from coronavirus settles in at 5.7%, or 57 times higher than the flu… death rate skyrockets to 20% when hospitals get overrun

(Natural News) A new study in The Lancet entitled, “Real estimates of mortality following COVID-19 infection” (source), finds that the global death rate from the coronavirus is settling in at around 5.7%, which is 57 times higher than the seasonal flu. The study warns that, “mortality rate of COVID-19 could be as high as 20% in Wuhan, the epicentre of the outbreak.”

This is consistent with what we already know about what happens when local hospital beds get overrun and patients no longer have access to critical care. The death rate skyrockets to 10-20%.

As the following chart shows from the study, the calculated case fatality rate appears to be settling at around 5%, with 5.7% the current best calculation: 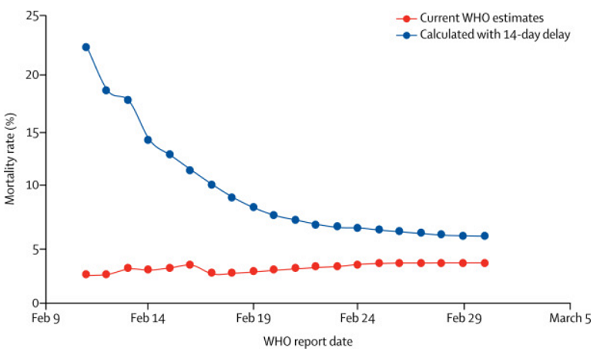 This means that for every 1 million Americans who get infected, we should expect around 50,000 deaths, maybe more. According to our pandemic projection models, there are right now far fewer than 1 million Americans infected, but the number is doubling about every four days, so it won’t take long to get there unless a national lockdown happens first.

The same study also shows a mortality rate of nearly 20% in areas where hospitals get overrun (such as Wuhan, where it all began). The study specifically warns, “These findings show that the current figures might underestimate the potential threat of COVID-19 in symptomatic patients.”

The study also warns that, “the median time from onset of symptoms to intensive care unit (ICU) admission is around 10 days.”

Since symptoms don’t appear for a few days in newly infected people, what this really means is that by the time 100 people need hospitalization, there are probably something like 1,000 additional people who have already been infected but aren’t yet requiring hospitalization.

Stated another way, if NYC doesn’t lock down the entire city before the hospitals start to surge, it’s already too late, and the subsequent 3 weeks are going to be absolute hell, with dead and dying patients flooding the system.

As we have stated before, the danger in all this is not “fear” itself, but in not being fearful enough early enough and thereby becoming complacent until it’s too late.

Analysis finds that California, Oregon and Washington will see its hospitals collapse as the pandemic spreads

Although USA Today is of course left-wing propaganda, their analysis of the hospital situation in liberal cities is not some twisted effort to hurt Trump. It’s actually an indictment of liberal cities and their total lack of preparedness to handle a pandemic.

“No state is prepared,” says this USA Today analysis, which then goes on to show that in particular, California, Oregon and Washington are the worst prepared.

“US hospitals will run out of beds if coronavirus cases spike,” warns the article, and the analysis is correct. “Places like Oregon, Washington, New Mexico and California might need eight times as many beds, according to the USA Today analysis.”

Check out the map below, and note that the dark blue states have the highest population per hospital beds: 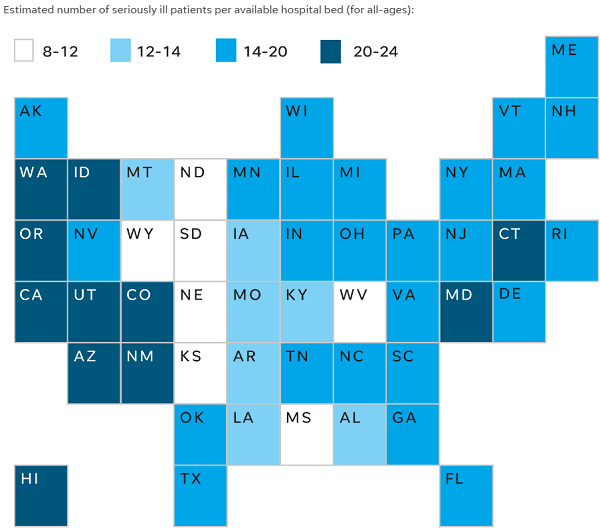 Notably, this analysis assumes all hospital beds are empty right now, which they aren’t. According to sources we’ve cited before, hospital beds across America are roughly 70-75% occupied on any given day.

That same USA Today article goes on to mention:

The Johns Hopkins Center for Health Security estimates that 38 million Americans will need medical care for COVID-19, including as many as 9.6 million who will need to be hospitalized – about a third of whom might need ICU-level care. In a February presentation to the American Hospital Association, Lawler estimated that as many as 96 million Americans could be infected.

Conclusion: The US health care system is on track to absolutely CRATER in the next 8 weeks or so

There’s no getting around it. There are probably already enough infections circulating across America to crater the hospital capacities in cities like Seattle, NYC and San Francisco. (Rural America will fare much better, thankfully.)

Do not take these numbers lightly. Don’t blow this off and think it’s some hoax or some fearmongering nonsense. All those who mocked preppers are about to get hit with a rude dose of reality in just a few days or weeks:

Stay informed. Read Pandemic.news if you want to live.

Previous :GET READY: Ten new predictions covering what will happen in America over the next 12 weeks due to the coronavirus
Next : BREAKING: Federal government to control and oversee grocery distribution with govt / private sector partnerships: Wal-Mart, Costco, Target, Kroger, top grocery chains to be deemed “critical infrastructure” … National Guard to protect key distribution points
Receive Our Free Email Newsletter

DANGEROUS: Dr. David Brownstein parrots horribly mistaken “seasonal flu death rate” math error committed by The Gateway Pundit to try to downplay the severity of the coronavirus pandemic
You need to calm down: Stressing out over gut inflammation WORSENS the disease, says research
Ibuprofen may increase susceptibility to the coronavirus, new study says; experts also link infectious complications to its use
US nursing homes devastated by coronavirus outbreak: Infection and death counts rise as vulnerable elderly get exposed to the virus
Doctors, nurses report dire shortage of protective gear — it’s like going to war with no weapons
483 people have died from the coronavirus in the USA, and 187 have recovered… so far, the case fatality rate is 72%
Italy continues to be pummeled by the coronavirus: Deaths now top that of China, health care system pushed to the limit – is there even an end in sight?
20% of Americans think they’ll get coronavirus, study shows
Say what? Populous L.A. County no longer even TRYING to contain coronavirus as officials instruct doctors to skip testing patients
WHO officials say global health systems “collapsing” as coronavirus sweeps the globe: “This isn’t just a bad flu season”

Get the world's best natural health newsletter delivered straight to your inbox.