They’re TRYING to spread it! Sacramento County announces ending all 14-day quarantines and releasing high-risk people into the general public

(Natural News) Now we know the anti-Trump liberals in America are literally trying to spread the virus and make the outbreak worse. Three days ago, Sacramento County announced it was ending all 14-day quarantines of high-risk people who had come into direct contact with coronavirus patients. This is being described by the county as a “shift from containment to mitigation,” meaning they are declaring there’s no longer any point in trying to contain the outbreak (even though they have only 10 confirmed cases in the entire county).

The policy is criminally insane. It flies in the face of every principle of infectious disease containment known to the modern world. This tactic from Sacramento County is ripped right out of the 17th century and smacks of deliberate sabotage to try to spread the virus and worsen the outbreak.

From the Sacramenty County press release:

Sacramento County announced today that it will shift its effort to community mitigation measures that will slow the spread of COVID-19 in the community, protect those who are most vulnerable to severe illness, and allow our health care system to prepare resources to take care of severely ill patients. These new measures will include cessation of 14-day quarantines.

With the shift from containment to mitigation, it is no longer necessary for someone who has been in contact with someone with COVID-19 to quarantine for 14 days. This applies to the general public, as well as health care workers and first responders. 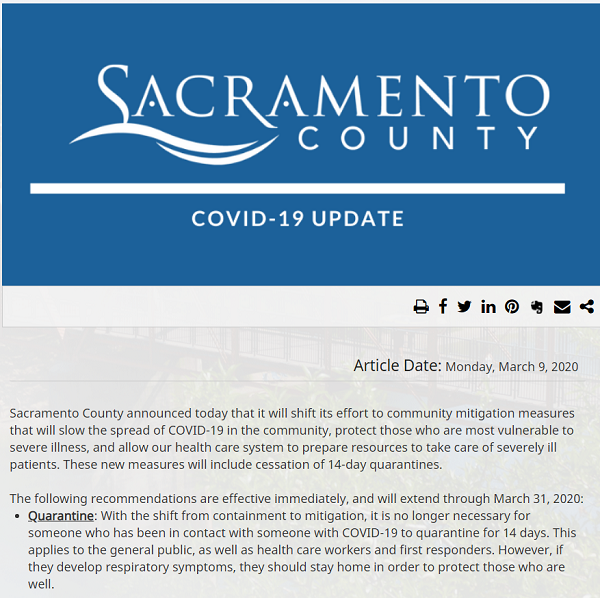 This announcement by Sacramento County flies in the face of every principle of infectious disease containment known and practiced around the world. Note, too, that none of the people being released are going to be tested. So there’s zero testing, zero containment and zero medical sanity Sacramento County.

The people who decided this should be arrested, prosecuted and immediately removed from power, as they are placing potentially millions of public lives at risk with their obviously malicious, deliberate attempt to spread this epidemic more rapidly.

Today we are calling on President Trump to order the military to take control of Sacramento County in order to reestablish commonsense quarantine / isolation measures for high-risk individuals. If the anti-Trump, anti-American liberals in Sacramento are too stupid to understand how to contain a deadly biological weapons epidemic that threatens millions of lives, it’s time to remove those lunatics from power and reestablish basic medical containment protocols under emergency orders to protect the public.

It’s time for Trump to declare a national emergency and, as Stewart Rhodes demanded yesterday in an interview on the Alex Jones Show, deploy the military in a health care infrastructure role to increase coronavirus testing and erect the necessary structures for medical response teams and quarantine centers so that infected individuals can be isolated from the general population.

California’s local leaders, it seems, are deliberately trying to spread the infection as a way to politically hurt Trump. They are playing with millions of lives in order to carry out their twisted anti-Trump political agendas. That action must be immediately halted, even if it means dispatching the United States military to achieve containment and medical sanity to Sacramento County.

The Sacramento County Public Information Office can be reached at 916-874-5001. If you live in the county, you may want to call Kim Nava in that office and ask why the criminally negligent lunatics who run that county are now deliberately and maliciously releasing all high-risk, potentially-infected people into the population at large. They are putting your life at risk, and they are doing it on purpose.

It’s not an “accident.” It’s malicious intent. Nobody in a public health office is so stupid that they would accidentally begin releasing all the high-risk people right in the middle of an exploding epidemic. This is a deliberate, criminal act of biological warfare being waged by anti-Trump lunatics to try to harm America and spread a deadly infectious disease. It must be stopped.

President Trump, declare a national emergency and deploy the military to California. Stop the left-wing lunatics from plunging America into chaos and collapse. Arrest the traitors and contain this epidemic before it infects or kills millions.

Read Pandemic.news to stay informed. Or move to Sacramento County if you prefer to die while living as an obedient slave under the rule of authoritarian morons.

Previous :BREAKING: Trump just changed the trajectory of the coronavirus pandemic… projected deaths by July 4th drops from 1.1 million to 283,000
Next : Congratulations! If you followed the Health Ranger, you just avoided losing 25% of your assets or being caught unprepared by the coronavirus pandemic
Receive Our Free Email Newsletter