During a Thursday discussion over the amount of money Mike Bloomberg has spent on advertising during the 2020 election – some $500 million, MSNBC‘s Brian Williams and New York Times editorial board member Mara Gay promoted a Twitter user’s very incorrect math.

“Somebody tweeted recently that actually with the money he spent he could have given every American $1 million,” said Gay.

“I’ve got it, let’s put it up on the screen,” replies Williams. 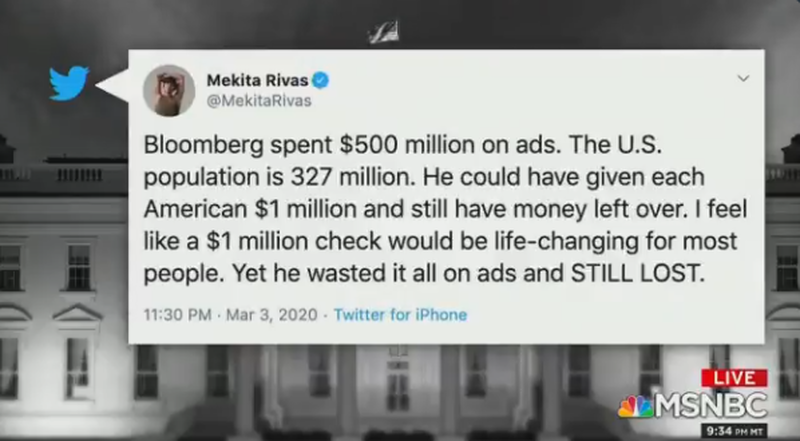 “When I read it tonight on social media it kind of all became clear,” added the MSNBC host, who then reads the actual (now-deleted) tweet.

“Bloomberg spent $500 million on ads. The U.S. population is 327 million. He could have given each American $1 million and still have money left over,” Williams read.

MSNBC’s Brian Williams reads a tweet: "Bloomberg spent $500 million on ads. U.S. Population, 327 million. He could have given each American $1 million"

In reality, Bloomberg’s advertising dollars would have amounted to roughly $1.53 per American.

Keep in mind – Williams and Gay obviously don’t understand math. But that tweet made it all the way through MSNBC‘s editorial process – and was made into an in-show graphic. And none of them caught the obvious error.

Weren’t members of the media just laughing about how they know math and those tin toothed rube voters didn’t?

The author of the original tweet has set her account to private. Her bio now reads “I know, I’m bad at math.”

Previous :‘It will make you physically sick:’ Professor recounts probe into organ harvesting in China
Next : WHO: Coronavirus is more deadly than originally thought
Receive Our Free Email Newsletter