(Natural News) As The Epoch Times is now reporting, China’s Hubei Province, which encompasses the Wuhan region known as “ground zero” for the coronavirus outbreak, is urgently adding 100,000 hospital beds even as the official infection numbers from the Chinese government are barely above 2,900.

“The epicenter of the coronavirus outbreak, China’s Hubei Province, is opening up 100,000 hospital beds in an effort to contain the disease, the province’s vice governor announced on Jan. 27,” reports The Epoch Times.

This is on the same day that China’s official numbers leapt from 2,901 infected to 4,239 infected, an increase of 46% in just one day.

The Chinese government’s official numbers cannot be reconciled with the announcement that 100,000 hospital beds are being urgently added to the regional health care infrastructure. If only three to four thousand people are infected, why build 100,000 additional hospital beds and lock down 17 cities?

“Another 24 medical centers will be mobilized to assist with patients who exhibit symptoms and are suspected to have the virus,” reports The Epoch Times, which also mentions that infections have now been reported in every Chinese province except Tibet.

Also mentioned in the article is the fact that hospitals in Hubei Province are currently consuming 100,000 protective suits each day, which means at least 100,000 health care workers are active on the scene.

The numbers don’t add up.

But the following chart provides some clarity, courtesy of Reuters and h/t to Zero Hedge: (current as of Jan. 27, 2020) 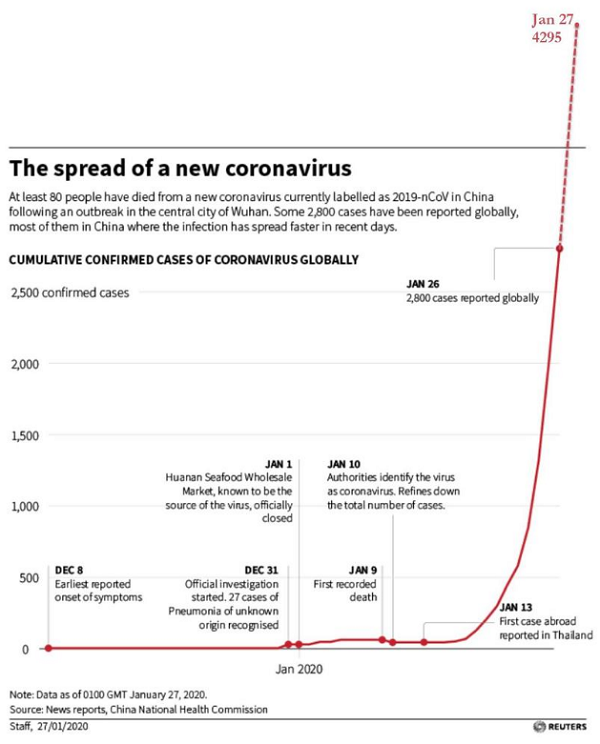 It’s hard to look at the chart above and not notice the parabolic rise in infections, typical of an out-of-control pandemic that’s clearly way beyond containment.

Keep in mind that the real numbers are surely much, much higher, perhaps as high as 90,000 infected patients according to anecdotal estimates from front-line health workers in China.

Multiple studies show COVID-19 mortality rate has dropped significantly since beginning of pandemic
Biden family’s China ties date back decades to Joe Biden’s term as senator
Chinese agents arrested for stalking and attempting to coerce Chinese dissidents into returning to China
Taiwan celebrates over 200 days without locally transmitted case of coronavirus
Major TV networks are censoring coverage of the Biden email scandal
The Biden Five: Profiling one of America’s most politically corrupt families
Hunter Biden maintained close relationship with CCP-tied energy tycoon
China is using the coronavirus pandemic to speed up its plans for global DOMINATION
WHO: Lockdowns not the primary method for fighting COVID-19, governments must develop “better systems” against pandemic
Airlines and transport officials CLASH with CDC over quarantines for airline passengers