Amazon fires nothing but another hysterical scare story from the fake news media; in truth, the number of fires is FALLING

(Natural News) By now, you have probably encountered at least one or two headlines from the mainstream media warning about the allegedly out-of-control fires that are supposedly devastating the Amazon rainforests of South America. But there is just one problem: Most of these fires are completely normal, and occur every single year as part of controlled agricultural burns.

Though it certainly will not generate as many article clicks as all of the fear-mongering is, the truth is that the Amazon is not burning to the ground, nor is one of the world’s “lungs” at an impending risk of failure, despite what celebrities like Leonardo DiCaprio and Madonna are now claiming. Instead, it is just business as usual down south – and also business as usual from the mainstream media.

As it turns out, the number of fires in the Amazon is actually declining, as evidenced by historical MODIS fire data released by Global Forest Watch. In fact, in some areas, the number of fires taking place is actually below average for this time of year, while other areas are experiencing what they usually do, seeing as how the Amazon is currently entering its usual seasonal dry spell. 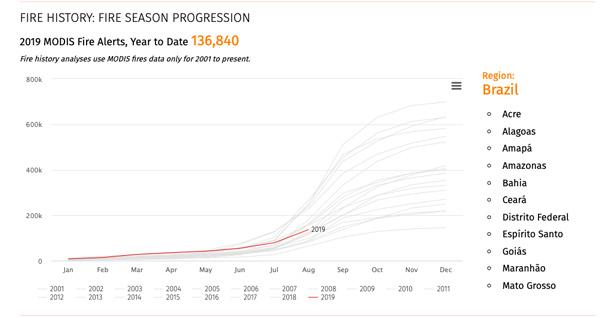 “… the Amazon forest, itself, IS NOT ON FIRE,” reports DC Dirty Laundry, noting that what is actually happening is that farmers are simply clearing the land to expand their agricultural operations.

“See, the Amazon, being a rain forest … gets a LOT of rain, for the majority of the year,” the report adds.

“That is how farmers can grow their rain-loving crops. Then once a year, the rains subside long enough for things to dry out a bit. And using a crop technique called slash and burn, or fire-fallow cultivation, that farmers have been using for 10,000 years, since we went agrarian and gave up the hunter-gatherer lifestyle, Amazon farmers burn their cropland, which helps control weeds and pests.”

For related news about how the mainstream media routinely creates fake, sensationalized headlines to increase profits through lies, be sure to check out Faked.news.

NASA says that Amazon fires are perfectly normal, even as mainstream media outlets use its space photos to spread deception

Hilariously, many mainstream media outlets have been publishing photos captured by NASA from space of the Amazon fires, and using them as “evidence” that the entire Amazon is quickly burning to the ground. But what these fake news outlets are failing to report with them is that NASA itself openly admits that the fires in question are perfectly normal.

“Many people use fire to maintain farmland and pastures or to clear land for other purposes,” NASA explains in a report that corresponded with the series of photos it released of some of the burns that were taken from space.

NASA goes on to explain in this report that, based on its satellite imagery, the total fire activity across the Amazon basin this year “has been close to the average in comparison to the past 15 years.” In other words, nothing out of the ordinary is happening – it is just the fake news media up to its usual shenanigans.

“Most of the land that is burning is NOT old-growth rainforest,” DC Dirty Laundry reiterates about the situation, noting that nothing is currently burning out of control. “Instead, it is land that has already been cleared of trees and set for agricultural use.”

“What is burning out of control, is a firestorm of #fakenews,” the report adds.

“Celebrities and World Leaders are too self-absorbed to know what year it is, and to know where the Amazon is. They are useful idiots that parrot all the lies of the MSM, without spending a second to double-check facts. And for some damn reason, all of the leftists look to these stupid people to inform them.”

Previous :NBC News is now attacking heterosexuality, the very basis of sustainable human life
Next : As the Obamas purchase a lavish, beach-front estate in Martha’s Vineyard many are asking: What happened to their claim that ocean levels are rising?
Receive Our Free Email Newsletter

Amazon fires nothing but another hysterical scare story from the fake news media; in truth, the number of fires is FALLING