Burning Man festival another great delusion by lunatic Leftists: The event TRASHES the desert and the local town like an ecological apocalypse

(Natural News) Burning Man may bill itself as one of the world’s largest “Leave No Trace” events, but that doesn’t mean the festival is actually doing any good for the environment. Despite the event’s environmentalist rhetoric, there are growing concerns about Burning Man’s environmental impact. From burning diesel fumes and lavish RV campsites to massive amounts of human waste, there are a number of not-so-Earth-friendly practices going on at the desert festival. While Burning Man may say,  “leave no trace,” the state of the desert says otherwise.

Residents from nearby towns say that “burners” are not nearly as “eco-friendly” as they believe themselves to be. For example, Daily Wire reports Burning Man doesn’t supply festival-goers with dumpsters to put garbage in, so a lot of trash ends up in the backyards of local residents. Burning Man itself has said that it would take at least 1,500 dump trucks to remove the 15,000 tons of waste produced by the festival and its attendees.

Instead, the environmentally-friendly burners leave their garbage in other people’s yards so someone else can take care of it. Actions speak louder than words — and this behavior exemplifies liberal dogma to a T. This is not the first time liberals have destroyed their environment, and it won’t be the last.

Supposedly, the lack of trash cans and dumpsters at Burning Man is supposed to make attendees more “aware” of their garbage production. But it also means the event organizers don’t have to pay for garbage removal — and it helps them hide how much waste is truly produced. In 2017, some 5,000 bikes were left behind. 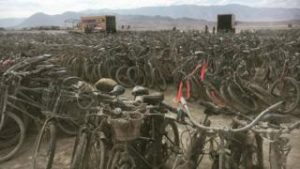 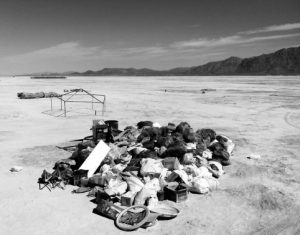 Residents from a number of nearby Nevada towns say that after Burning Man is over, burners are all too eager to illegally dump their garbage once they’ve reached civilization. Sometimes they leave four-foot piles of garbage littering the desert.

Reno resident Garrett York says, “Take a drive around Reno in the days following Burning Man, and you will easily see illegally dumped trash just about everywhere. It’ll be covered in playa dust.”

Another Reno resident, Elle Dee Childress, says she has to lock her garbage cans the week the festival ends. One year, she recalls, burners walked right up her driveway and filled all her garbage cans up with their waste.

A resident from Gerlach, NV tells The Wall Street Journal, “This town gets trashed.” The resident suggested further that Burning Man’s anti-capitalist Utopian facade is just an image they uphold to make money. “This is big money for Burning Man and they should be responsible,” he stated.

While Burning Man may continue to promote its image as a Utopian reprieve from reality, federal regulators are pushing for event leaders to take a more assertive approach to keeping the desert clean. The Bureau of Land Management (BLM) has said that Burning Man needs to implement a number of changes at Black Rock City, where the event is hosted each year, to better protect the environment.

Some of these changes include providing designated trash disposal areas for attendees, a “trash fence” to prevent winds from blowing refuse across the playa and improvements to the festival’s water and sewage systems. BLM also wants Burning Man to contribute to the maintenance of the single highway that leads to Black Rock City. Residents of the area feel that the event should take more responsibility for the pollution they create.

After the 2018 Burning Man festivities, BLM said burners left behind far too much garbage — including an abandoned 747 plane that had been turned into luxury living quarters.

Burning Man organizers say that the BLM’s recommendations do not fit with their “vision” of the festival. The fact that it would increase the event’s expenditures by 60 percent probably doesn’t sound to appealing to Burning Man leaders either.

Previous :Illegal alien rapes Seattle-area woman after pretending to be an Uber driver
Next : The most catastrophic West Coast earthquake in human history is ready to be unleashed: “Cascadia subduction zone”
Receive Our Free Email Newsletter

President of the Czech Republic: “Black Lives Matter” is a racist slogan, because ALL LIVES MATTER
Two amazing documentary videos you need to see … that will forever alter your perception of “reality”
The Awakening to Human Truth – Powerful new video forces Leftists to face the depths of their own anti-human EVIL
Brighteon explodes in popularity as users flee YouTube in droves due to insane censorship
AMAZING conversation between Alan Keyes and the Health Ranger released on video, covering depopulation, geoengineering and the corruption of science and medicine
Despite the global chaos, on this Thanksgiving Day we still have many things to be thankful for… including YOU
Evidence of “funerals” in gorilla society? Video shows baby grooming dead mother’s body
Russian collusion, Roger Stone, abortion on demand, social media, banking, education, elections, and medicine: EVERYTHING in rigged in today’s America
Civil war is coming, and the COLLAPSE is imminent… here’s how to maintain your sanity as it all comes down
Check out the “Think About It” video channel on Brighteon… if you seriously want to awaken to reality